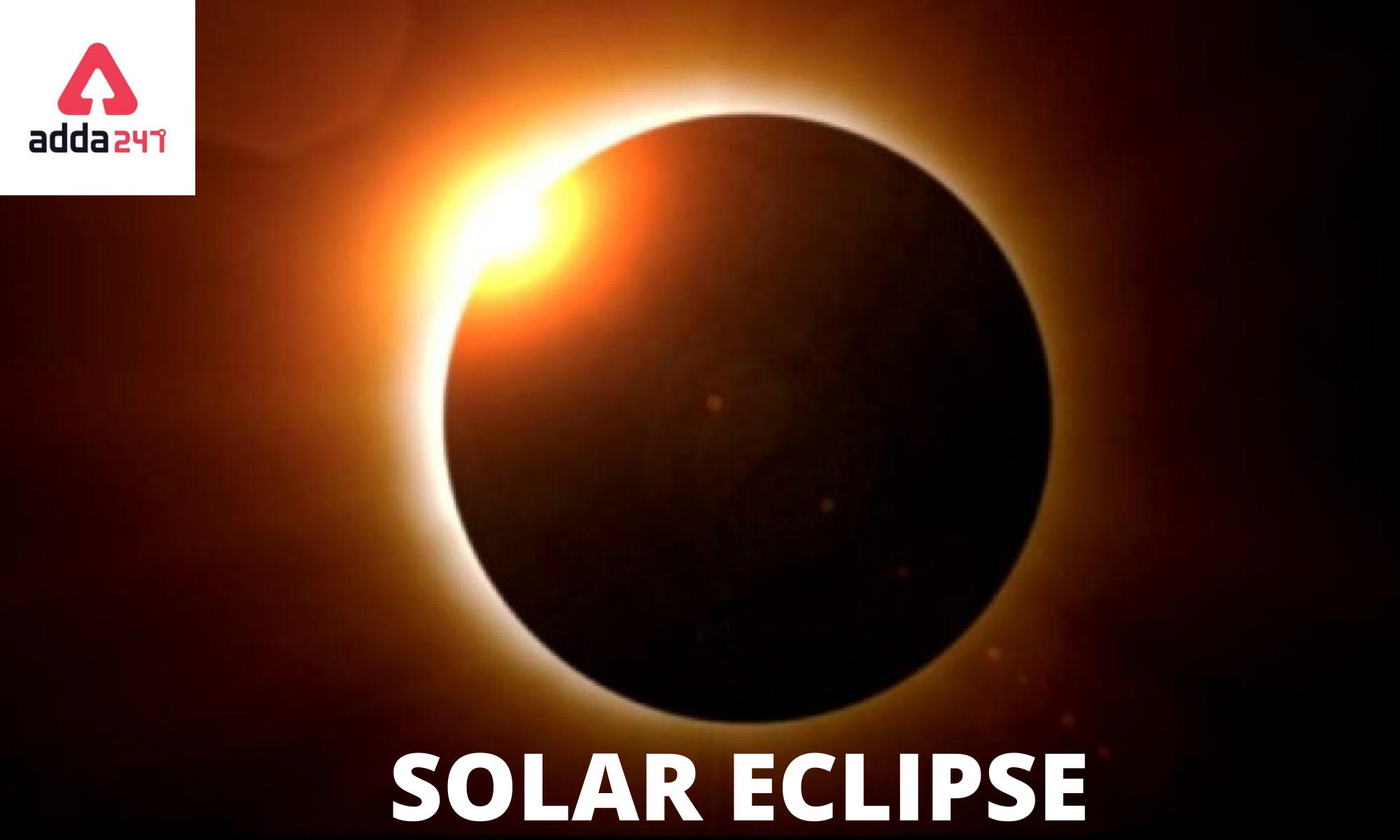 A solar eclipse happens when the Moon passes between Earth and the Sun, completely or partially blocking Earth’s view of the Sun. A new moon occurs when such an alignment occurs, showing that the Moon is closest to the plane of the Earth’s orbit. The disc of the Sun is completely hidden by the Moon during a total eclipse. Only a portion of the Sun is veiled in partial and annular eclipses.

Every new moon, if the Moon were in a completely circular orbit and in the same orbital plane as Earth, total solar eclipses would occur. The Moon’s orbit is tilted at around 5 degrees to Earth’s orbit, thus its shadow frequently misses the planet. Solar (and lunar) eclipses occur only during eclipse seasons, resulting in at least two and up to five solar eclipses every year, with no more than two total eclipses possible. Because total eclipses need a more accurate alignment between the Sun and Moon’s centres, and because the Moon’s apparent size in the sky is occasionally too tiny to entirely cover the Sun, they are more rare.

A total eclipse happens when the Moon’s dark silhouette totally obscures the Sun’s intensely bright light, revealing the much fainter solar corona. Totality happens only in a restricted track on Earth’s surface during any given eclipse. The road of wholeness is the name given to this tight path.

When the Sun and Moon are perfectly aligned with the Earth, but the Moon’s apparent size is smaller than the Sun, an annular eclipse occurs. As a result, the Sun appears as a bright ring, or annulus, encircling the Moon’s dark disc.

When the Sun and Moon are not completely aligned with the Earth, a partial eclipse occurs, and the Moon only partially obscures the Sun. Outside of the path of an annular or complete eclipse, this phenomena may normally be observed from a broad portion of the Earth. Because the umbra passes above the Earth’s polar regions and never meets the Earth’s surface, some eclipses can only be observed as partial eclipses.

Total solar eclipses are extremely unusual occurrences. Although they occur every 18 months on average somewhere on Earth, they are projected to occur just once every 360 to 410 years at any given location. Because the Moon’s umbra advances eastward at almost 1700 km/h, the total eclipse lasts only a few minutes at most locations. Totality can now last no more than 7 minutes and 32 seconds. This number has fluctuated throughout millennia and is currently falling. The longest theoretically feasible total eclipse by the eighth century will be less than 7 minutes and 2 seconds. The last time an eclipse lasted more than seven minutes was on June 30, 1973. (7 min 3 sec).

Other eclipses can be predicted using eclipse cycles. The saros is probably the most well-known and accurate of them all. A saros lasts 6,585.3 days (just over 18 years), which suggests that a nearly identical eclipse will occur after that time. The most significant difference will be a 120° westward movement in longitude (because to the 0.3 days) and a little shift in latitude (north-south for odd-numbered cycles, the reverse for even-numbered ones). A saros series begins with a partial eclipse near one of Earth’s pole areas, moves across the globe through a sequence of annular or total eclipses, and concludes with a partial eclipse near the opposite polar zone.

Historical eclipses are a useful resource for historians since they allow for the precise dating of a few historical events, which can then be used to extrapolate other dates and ancient calendars. An Assyrian text mentions a solar eclipse on June 15, 763 BC, which is significant for the chronology of the ancient Near East. Other claims have been made to date earlier eclipses. The sun standing stationary in the sky for a full day is described in Joshua 10:13; a group of University of Cambridge academics decided that this was the annular solar eclipse that happened on October 30, 1207 BC.

Ans. When the moon passes in front of the Sun as seen from Earth, a solar eclipse occurs. It grows dimmer and dimmer outside during a solar eclipse as the Moon covers more and more of the Sun. During a total eclipse, the entire Sun is obscured for a few minutes, and the sky darkens dramatically.

Ques. What should pregnant ladies do during solar eclipse?

Ques. How long does a solar eclipse last?

Ans. A lunar eclipse can last up to an hour and a quarter, but the longest duration of totality for a solar total eclipse is only 71/2 minutes.

Ques. What is the cause of Solar Eclipse?

Ans. A solar eclipse happens when the Moon casts a shadow over a section of the Earth, blocking sunlight completely or partially. When the Sun, Moon, and Earth are all aligned, this happens. A new moon (syzygy) occurs when such an alignment occurs, showing that the Moon is closest to the ecliptic plane.

Ques. How many times does a solar eclipse happen?

Ans. Each year, there are two to five solar eclipses, with a total eclipse every 18 months or so. Depending on where you are in the world, you may be able to see the eclipse.