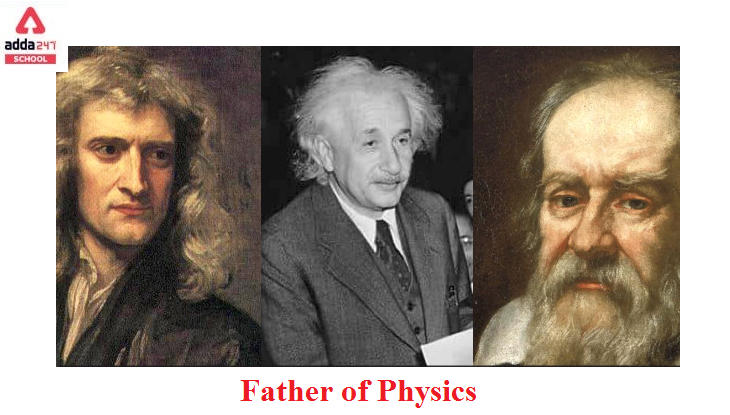 Who is the father of physics?

Galileo Galilei is considered the father of Physics.
In this article, we will be getting to know who he exactly was, where he was from and a lot more about Galileo Galilei, the genius.

Read About: Father of Biology

The full name of Galileo Galilei is Galileo di Vincenzo Bonaiuti de’ Galilei. Galileo Galilei was an astronomer, physicist, and engineer who lived in the 16th century. Polymath is a term used to describe Galileo Galilei. Galileo Galilei was born in Pisa, which is now in modern-day Italy. Galileo is often referred to as the “Father of Modern Physics.” He is also known as the “Father of Modern Science,” the “Father of the Scientific Method,” and the “Father of Observational Astronomy.”
Speed and velocity, gravity and free fall, the idea of relativity, inertia, and projectile motion were among Galileo’s research topics. In addition, he engaged in the field of applied science and technology. He was the inventor of the thermoscope and a number of military compasses.
He even utilised the telescope to observe celestial objects for scientific purposes. Telescopic confirmation of Venus’ phases, observation of Jupiter’s four greatest satellites, observation of Saturn’s rings, and analysis of sunspots are among Galileo Galilei’s contributions to observational astronomy.

Who is the father of physics in India?

Galileo’s support for Copernican heliocentrism drew criticism from both inside the Catholic Church and among astronomers. Later, in Dialogue Concerning the Two Chief World Systems, Galileo defended his beliefs.
He spent the rest of his life under house imprisonment, during which time he wrote Two New Sciences, a collection of essays on kinematics and material strength. He summarised studies on the two sciences that he had done some forty years before. Furthermore, now known as kinematics and material strength, it was published in Holland to avoid censorship. Galileo is generally referred to as the “Father of Modern Physics” as a result of his work. In 1638, he lost his sight totally and was suffering from a terrible hernia and insomnia. He was given permission to fly to Florence for medical consultation.
Pope Urban VIII had become distracted with court intrigue and began to dread persecution or threats to his own life before Galileo’s trial for heresy. After being accused of cowardice in protecting the church, Urban responded angrily and fearfully against Galileo.
Until 1642, Galileo was open to guests. He died on January 8, 1642, after suffering from fever and heart palpitations. He died at the age of 77. Ferdinando II, Grand Duke of Tuscany, desired that he be buried in the main body of the Basilica of Santa Croce and that a marble mausoleum be built in his honour. It was close to his father’s and other ancestors’ graves.
Galileo’s right hand’s middle finger. After Pope Urban VIII and his nephew, Cardinal Francesco Barberini, complained, the plans were scrapped. Because Galileo had been condemned by the Catholic Church for “vehement suspicion of heresy,” Pope Urban VIII and his nephew, Cardinal Francesco Barberini, objected. Instead, he was entombed in a modest room adjacent to the novices’ chapel. In 1737, he was reburied in the basilica’s main body after a memorial was erected in his honour. In addition, three fingers and a tooth were taken from his body throughout this process. The Museo Galileo in Florence, Italy, is now displaying these fingers.
Galileo Galilei held a library of at least 598 books on the outskirts of Florence in his final years. He was not allowed to write or publicise his opinions while under house arrest.
Galileo may have feared that his collection of books and manuscripts would be taken by the government and burned because no mention of such materials was made in his last will and testament, based on his previous experience. After Galileo’s death, when the majority of his belongings, including his library, passed to his son, Vincenzo Galilei, Jr., an itemised inventory was created. Sestilia Bocchineri, his wife, received the collection after his death in 1649.

Who is father of physics?

The title Father of Physics goes to three people. Issac Newton Albert Einstein and Galileo Galilei are referred to as the Fathers of Physics. Physics is a subfield of science that focuses on studying natural phenomena common in the natural world.

The construction of this scientific discipline, formally known as physics, was drawn primarily from the fields of astronomy, optics, and mechanics. These were methodologically united and connected with the help of geometry. These mathematical disciplines began in antiquity with the Babylonians. Moreover, with Hellenistic writers such as Archimedes and Ptolemy, it grew with time.

Read About: Sugar Bowl in the world

FAQs on Father of Physics

Who is considered the father of physics, Galileo or Newton?

Galileo Galilei is considered the father of modern physics.

What was Galileo’s claim to fame?

Galileo is well-known for his telescope inventions.

What was Galileo’s name?

Galileo was a natural philosopher, astronomer, and mathematician who lived in the 16th century.

What is the name of the mother of physics?

Marie Curie is known as the “Mother of Modern Physics.”

Who is known as the “Father of Science”?

Galileo was called the “Father of Modern Science” by Albert Einstein.