Skip to content
Online Tution   »   Important Question   »   Who is the Father of Biology? 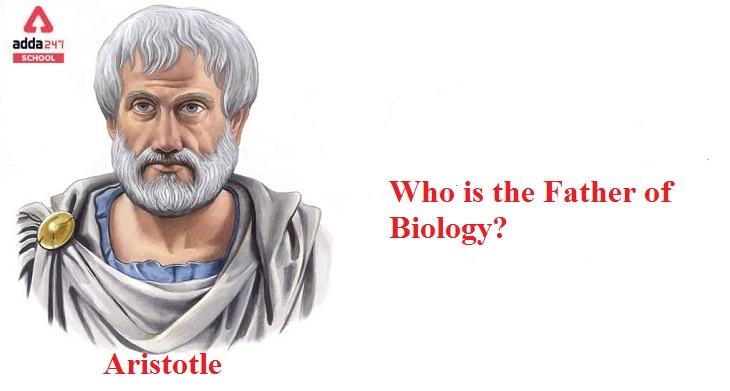 Who is the father of biology?

Read About: Sugar Bowl  of World

The Father of Biology: Aristotle

Aristotle is widely regarded as the “Father of Biology.” In the year 384 BC, Aristotle was born. Aristotle visited Lesvos, which was teeming with fauna, in the 4th century BC. His curiosity with what he discovered there led to the development of a new science called Biology.
Aristotle is renowned as the “Father of Biology” because he investigated the natural world extensively and looked into its beginnings using scientific ideas and systematic observations rather than attributing them to divine intervention. He was also the first to discover animal relationships and develop a classification system.
Let’s dive in deeper and we will learn more about what biology exactly is and who was Aristotle?
Firstly, we will talk about Aristotle and his life and all the related aspects.

Read About: What are isobars?

Who is Known as the father of biology?

Aristotle was a Greek polymath and philosopher. He was the founder of the Aristotelian tradition and the Lyceum. Aristotle offered a complicated synthesis of the numerous philosophies that had existed before him. As a result, his theory has had a profound impact on practically every aspect of Western knowledge. It is still a topic of intellectual debate in today’s world.
His life, however, is shrouded in mystery. Aristotle was born in the northern Greek city of Stagira. Nicomachus, Aristotle’s father, died when he was a child. Aristotle grew up with a guardian. He enrolled in Plato’s Academy in Athens at a young age and stayed there until he was thirty-seven years old.
Aristotle departed Athens shortly after Plato died. Furthermore, at the request of Philip II of Macedon, Alexander the Great was schooled from the start. In the Lyceum, he constructed a library. This library in the Lyceum aided him in the production of many of his hundreds of papyrus scroll books. Despite the fact that Aristotle produced many beautiful treatises and dialogues for publishing, only about a third of his original work has survived because none of it was meant for publication.

Aristotle: Who is the Father of Biology in India?

Aristotle was the first to conduct a systematic study of biology. He spends a lot of time writing about biology. He spent two years studying and documenting the biology of Lesbos and its environs. His information in Animal History, Animal Generation, Animal Movement, and Animal Parts is based on his own observations. Also included are statements made by experts with specialised knowledge, such as beekeepers and fishermen, as well as less precise accounts offered by international travellers.
Aristotle covers the water life in detail, including the catfish, electric ray, and frogfish. He also goes into detail about cephalopods like the octopus and the paper nautilus. He accurately describes the four-chambered forestomachs of ruminants, as well as the hound shark’s ovoviviparous embryological development.
He observes that the structure of an animal is well linked to its function. He further claims that the heron, which lives in soft mud marshes and feeds on fish, has a tall neck, long legs, and a pointed spear-like beak, whereas swimming ducks have short legs and webbed feet.
Modern readers may interpret Aristotle’s ideas as implying evolution, although he considered them as uncommon occurrences. He also mocked Empedocles’ materialist theory of “survival of the fittest” and the notion that accidents may lead to ordered outcomes. In modern language, he never says that diverse species can have an ancestry. He also didn’t believe that one species could evolve into another or that species could become extinct.

who was the father of Biology?

The fascinating features of biology are addressed by several sub-disciplines or branches of biology. Some branches of science are intertwined with other disciplines.
Theoretical biology is a discipline of biology that uses mathematical models to examine specific life processes.
Quantum Biology is concerned with quantum mechanical-biological processes, such as the conversion of energy into more useable forms.

Read About: Greenpeace of India

FAQs on Who is the Father of Biology?

Who do people believe the father of modern biology is?

Darwin is regarded as the founding father of modern biology.

What is the name of the father of zoology?

The father of zoology, Aristotle, is widely regarded.

Who is known as the “Father of Science”?

Galileo was called the “Father of Modern Science” by Albert Einstein.

What is the name of the father of civics?

The father of civics is Benjamin Franklin.

What is the name of the father of mathematics?

The Greek mathematician Archimedes is regarded as the father of mathematics.