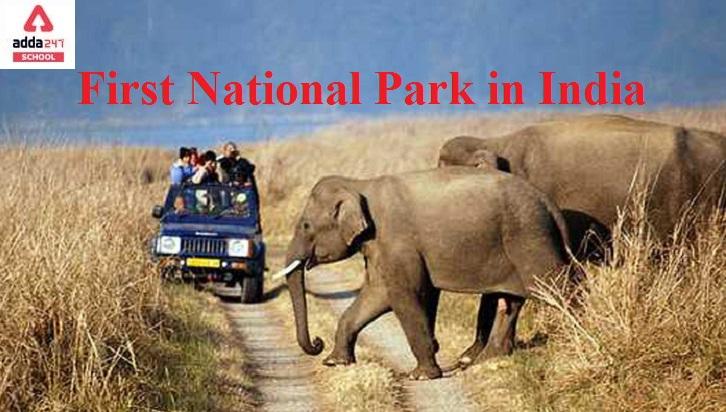 The First National Park in India, Jim Corbett National Park, was founded in 1936. When founded(in the year 1936), it was known as Hailey National Park, and then later renamed Ramganga in the mid-1950s. It was further renamed Corbett later in that decade in honour of Jim Corbett, a well-known British sportsman and writer. The park covers a total area of 201 square miles. It is part of the larger Corbett Tiger Reserve, which covers 497 square miles and includes surrounding protected areas, that has a stretch of almost 1,288 square km. It is the oldest national park in India.

The park is situated in the Himalayan foothills, approximately 35 miles or 50 kilometres, northwest of Ramnagar, the park headquarters, at heights ranging from 1,260 to 3,610 feet.

It is mostly located in the vast Patlidoon Valley, through which the Ramganga River flows westward. The river was dammed near the park’s western end to create a big reservoir in the reserve area’s centre and along the park’s western edge, which is used for sport fishing. Sal, silver fir, spruce, cypress, birch, and bamboo species make up the forest cover. To provide natural cover for the park’s animals, a reed forest was planted.

The Bengal tiger was the primary reason for the park’s creation. In 1973, India’s Project Tiger was founded to offer safe havens for tigers in the country’s national parks.

Langurs, sloth bears, Asiatic black bears, Indian grey mongooses, jungle cats, elephants, wild boars, chitals, barking deer, and nilgai are among the various creatures present in the park. Snakes and crocodile species are among the reptiles and amphibians. At least 600 species of resident and migratory birds have been recognised.

The park is open from mid-November to mid-June and is closed during the summer monsoon season when the roads become unusable due to heavy rainfall. The park features roads that make jeep or elephant tours possible. Wildlife may be observed from a number of machans or observation platforms. Several establishments in the park provide overnight accommodations.

A national park is a protected area dedicated to the conservation of animals and biodiversity of that region. National parks are places where activities such as development, forestry, poaching, hunting, and grazing on cropland are prohibited. The government has the authority to designate an area as a national park if it has sufficient ecological, geomorphological, and natural value. Even individual ownership rights are prohibited in certain parks. Their borders are clearly defined and well-defined. They are mainly tiny reserves, ranging in size from 100 to 500 square kilometres. Because of India’s biodiversity, each state has at least one national park that showcases the region’s diverse flora and fauna.

A national park, according to the Indian Ministry of Environment and Forests, is a protected area in India. “[a]n area, whether or not it is within a sanctuary, that can be designated as a National Park by the state government due to its ecological, faunal, floral, geomorphological, or zoological significance, which is required for the purpose of protecting and propagating or developing wildlife in or around it. Except for those approved by the state’s Chief Wildlife Warden under the circumstances set forth in CHAPTER IV, WPA 1972, no human activity is permitted inside the national park,” is what the Indian Ministry of Environment and Forests understands about the term, National Park.

In India, national parks are classified as IUCN category II protected areas. Jim Corbett National Park is India’s first and oldest national park. India only has five national parks in 1970. To protect the habitats of conservation-dependent species, India passed the Wildlife Protection Act in 1972 and Project Tiger in 1973.

In the 1980s, more federal legislation was introduced to bolster wildlife preservation.

What has been India’s first national park?

What is the name of the first national park?

What is the most popular national park in the United States?

Great Smoky Mountains National Park is the most visited national park in the United States, with over 12.1 million visitors. This park, which spans North Carolina and Tennessee, is famed for its wildlife, waterfalls, and foggy mountains.

Which country has the most number of national parks?

What has been India's first national park?

What is the name of the first national park?

What is the most popular national park in the United States?

Great Smoky Mountains National Park is the most visited national park in the United States, with over 12.1 million visitors. This park, which spans North Carolina and Tennessee, is famed for its wildlife, waterfalls, and foggy mountains.

Which country has the most number of national parks?