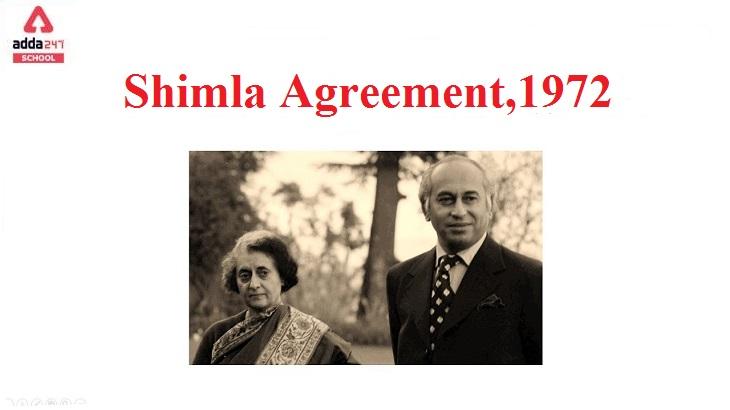 Simla Agreement, 1972– The Shimla Agreement was signed on July 2, 1972, at Shimla, the capital of the Indian state of Himachal Pradesh, between India and Pakistan. It began after India participated in East Pakistan as a supporter of Bengali insurgents fighting against Pakistani state forces in the Bangladesh Liberation War in 1971. The Indian participation was critical in the conflict, resulting in East Pakistan’s separation from West Pakistan and the birth of Bangladesh as an independent country.

Read About: The National emblem of India.

The treaty’s stated purpose was to “put an end to the conflict and confrontation that has hitherto marred their relations” and to “conceive the steps to be taken for further normalisation of India–Pakistan relations, while also laying down the principles that should govern their future interactions.”

The treaty was signed by Pakistan’s President Zulfiqar Ali Bhutto and India’s Prime Minister Indira Gandhi. The accord also prepared the path for Pakistan to recognise Bangladesh diplomatically.

The cease-fire line between India and Pakistan was renamed the Line of Control (LOC) in the agreement, and it was stated that “neither party shall seek to unilaterally change it, irrespective of mutual disputes and legal interpretations.” Many Indian bureaucrats later claimed that during a one-on-one encounter between the two chiefs of government, a tacit agreement was formed to convert the LOC into an international border. Pakistani bureaucrats, on the other hand, have rejected this.

The pact has not prevented the two countries’ relationship from worsening to the point of military conflict, as it did most recently during the Kargil War in 1999. In 1984, India carried out Operation Meghdoot, seizing the entire inhospitable Siachen Glacier region, where the border had been clearly not established in the agreement; Pakistan saw this as a violation of the Simla Agreement. Natural calamities, including avalanches in 2010, 2012, and 2016, have claimed the majority of subsequent lives in the Siachen Conflict.

Read About: Partition of Bengal, 1905

The Shimla pact of the two countries, India and Pakistan, was an agreement upon various aspects. Here, are some of the main points from the pact.

The two countries are committed to resolving their disagreements through peaceful measures, such as bilateral dialogue or any other peaceful ways that they mutually agree on. Neither party shall unilaterally alter the situation pending the full resolution of any of the two countries’ disputes, and both shall prevent the organisation, assistance, or promotion of any activities detrimental to the maintenance of peace and cordial relations.

Steps must be taken to restore postal and telegraphic communications, as well as sea, land, and air ties, including flights.

Appropriate actions must be done to promote travel opportunities for the other country’s citizens.

Forces from India and Pakistan would be withdrawn to their respective sides of the international boundary.

Withdrawals will begin upon the agreement’s entry into force and must be completed within 30 days of that date.

Read About: Second Battel of Panipat

What was the purpose of the Simla Pact?

The treaty’s stated objective was to “put an end to the dispute and confrontation that has hitherto disfigured their relations” and to “conceive the steps to be followed for further normalisation of India–Pakistan relations.”

Who was the victor in the 1971 war with Pakistan?

The military might of India was demonstrated when it seized roughly a third of West Pakistan’s army, forcing them to surrender. With the liberation of East Pakistan and the formation of Bangladesh, the war came to a conclusion.

Which country was the first to accept Pakistan?

Iran was one of the first countries to acknowledge Pakistan’s sovereign status when it earned independence in August 1947.

What was the point of the deputation to Simla?

In October 1906, the Simla Deputation, chaired by the Aga Khan III, gathered 35 important Indian Muslim leaders in the Viceregal Lodge in Simla. The delegation’s goal was to persuade Lord Minto, then-Viceroy of British India, to give Muslims more political power.

What caused Pakistan to lose the Kargil war?

Sharif ordered the Pakistani troops to leave the Kargil heights, citing a deteriorating military situation, diplomatic isolation, and the threat of a bigger conventional and nuclear war. General Pervez Musharraf, he later alleged in his official biography, had transferred nuclear bombs without alerting him.