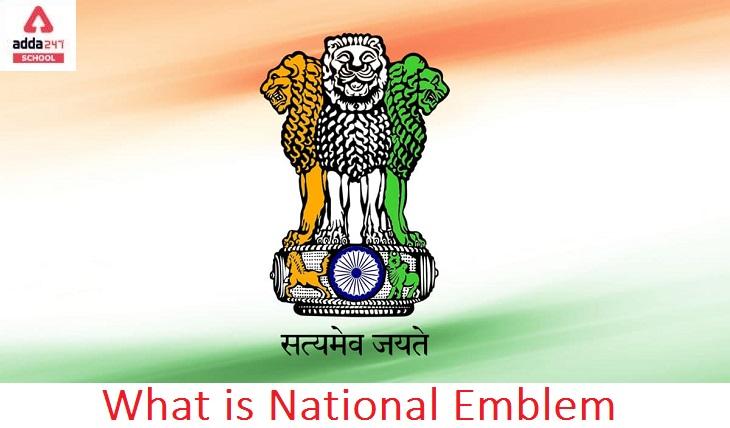 What is the National Emblem of India?

What is the National Emblem of India? A national emblem is a sign of a nation-state or multi-national state. In addition to a national flag and coat of arms, many countries have their own seal or logo.

The national emblem of India, which is used by the government of India, as well as numerous state governments and government institutions. The Ashoka Lion Capital, a statue dated 280 BCE, inspired the insignia. The sculpture depicts four lions in three dimensions. It was adopted as the Dominion of India’s and then the Republic of India’s emblems in December 1947.
Read About: Amendment of Indian Constitution

The Indian national emblem is based on Ashoka’s Sarnath Lion Capital. The Emblem shows three lions. With a bull on the right and a galloping horse on the left, and outlines of Dharma Chakras on the extreme right and left, the Ashoka Chakra (wheel) emerges in relief in the centre of the abacus. The motto Satyameva jayate, engraved below the abacus in Devanagari script, is an intrinsic feature of the emblem. This is a passage from the holy Hindu Vedas’ Mundaka Upanishad, which concludes the sacred Hindu Vedas. On January 26, 1950, India became a republic, and this National Emblem was adopted.
The Sarnath capital in reality has four Asiatic lions standing back to back on a circular base, symbolising power, courage, confidence, and pride. A horse and a bull are at the bottom, while a Dharma chakra is in the middle. The panel is a frieze of high relief sculptures of The Lion of the North, The Horse of the West, The Bull of the South, and The Elephant of the East, divided by intervening wheels, atop a full-bloom lotus, symbolising the source of life and creative inspiration. The polished capital, carved from a single block of sandstone, is capped with the Wheel of the Law.
The national emblem appears on all Indian banknotes and is printed on the Government of India’s official letterhead. In many places, it also serves as India’s national emblem, and it is prominently displayed on Indian passports.
Read About: Partition of Bengal

Following are the prohibitions on the usage of the National Emblem of India:

·       Without the permission of the appropriate government, no one may use the emblem or any imitation to give the impression that it is associated with or an official document of the Central Government or State Government, as the case may be.

·     Except in instances stipulated by the Central Government, no one should use the symbol for commercial purposes or as part of a patent title, trademark, or design.

·       It is forbidden to register intellectual property that contains the Emblem.

·      The Central Government has the authority to regulate and establish rules for the proper use of the Emblem.

FAQs on National Emblem of India

What does it mean to have a national emblem?

A national emblem is an emblem or seal that is reserved for use as a symbol of a nation-state or multi-national state. In addition to a national flag and coat of arms, many countries have a seal or symbol.

What is the name of our national flag?

The national emblem of India is Ashoka’s Lion Capital in Sarnath. It features four Asiatic Lions standing shoulder to shoulder on a circular abacus.

What animals are depicted on the national flag?

There are four lions standing back to back in the old Lion Capital. The abacus is a frieze with elephant, horse, bull, and lion statues divided by wheels over a bell-shaped lotus.

What is the number of animals in the national emblem?

The national insignia features four animals: an elephant, a horse, a bull, and a lion.

What is the name of India’s national reptile?