Skip to content
Online Tution   »   Important Question   »   Smallest and Largest cell in the... 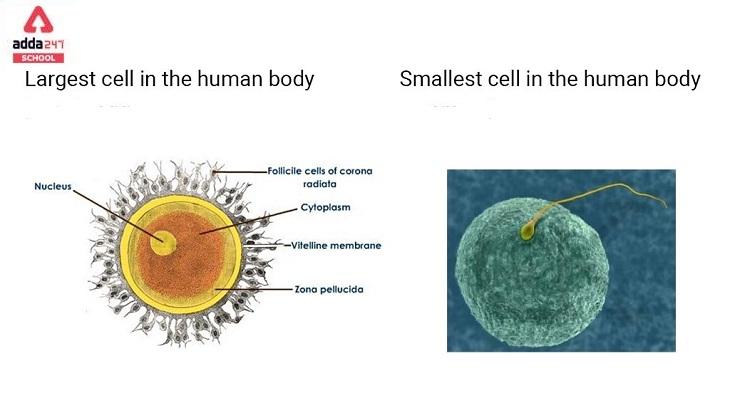 The egg cell, also known as the ovum, is the largest cell in the human body and is the female reproductive cell, or gamete, in most sexually reproducing species. Anisogamous creatures are those that reproduce sexually with a larger female gamete and a smaller male gamete. Oogamous sexual reproduction is defined as a type of sexual reproduction in which the male gamete or sperm can migrate. An oosphere is a nonmotile female gamete generated in the oogonium of some algae, fungi, oomycetes, or bryophytes, which becomes the oospore when fertilised.
A diploid cell, known as the zygote, is created when the egg and sperm combine during fertilisation. It develops into a new organism quickly.
Egg cells are also known as ova in animals, which comes from the Latin word ovum, which means “egg”; the single form of this other name for egg cells in the human body is the ovum. The term ovule refers to a juvenile animal’s ovum. Female gonads, often known as ovaries, are the sex glands of female vertebrates that generate eggs. Mammalian ova are present at birth and mature during the oogenesis process.
The ovum is fertilised inside the female body of all animals and grows from primitive germ cells embedded in the ovaries’ material. Each of them splits several times to produce uterine gland secretions. They eventually join together to form a blastocyst.
The ovum is visible to the naked eye and is one of the biggest cells in the human body. The diameter of a human ovum is roughly 0.0047 inch.
The ovum’s yolk is called ooplasm. At its core, it is a cell material. It contains the ovum’s nucleus, known as the germinal vesicle, as well as the nucleolus, known as the germinal spot.
The cytoplasm of a normal animal cell makes up the ooplasm. It also has spongioplasm and hyaloplasm, also known as the formative yolk, as well as the nutritional yolk, or deutoplasm. The cytoplasm is filled with spherical granules of fatty and albuminoid compounds.
Only a little portion of the nutritious yolk is found in mammalian oocytes. Its purpose is to nourish the embryo during its early stages of development.
Ovarian ova form protective layers in oviparous animals. It then travels to the exterior of the body via the oviduct. Male sperm fertilises them either inside or outside the female body, depending on the organism. An embryo develops after the fertilisation process. The nutrients in the egg provide nourishment to the embryo. After that, it emerges from the egg.
The cytoplasm and mitochondria of the egg cell are the only components. As a result, the egg can proliferate through mitosis and, after fertilisation, create a blastocyst.
As in oviparous species, the embryo develops inside and is fed by an egg in ovoviviparous mammals. However, just before birth, it hatches inside the mother’s body. It may even hatch immediately after the egg has left the mother’s body.

Largest Cell in the Human Body

The cell is defined as the smallest, most basic unit of life responsible for all life processes. Many scientists suggest that the sperm is a tiny cell in volume. The head of the sperm cell is 4 micrometers long, slightly smaller than the red blood cell (RBC). The size of the RBC was about 5 micrometers. The largest cell is the egg in the human body. The ovum, also called the egg cell, is the reproductive cell in a woman’s body. The egg is 20 times larger than a sperm cell and has a diameter of about 0.1 mm. The tallest cell in the human body is the nerve cell.

What is the Largest cell in the Human Body?

Now let’s know about the largest cell in the male human body.
A neuron is the largest cell in the male human body. A neuron, often known as a nerve cell, is a cell that can be electrically excitable. It is the fundamental component of nervous tissue in all animals and connects with other cells via specialised connections called synapses. Plants and fungi, on the other hand, lack nerve cells.
Neurons are usually divided into three categories: Motor neurons, which receive signals from the brain and spinal cord to control everything from muscle contractions to glandular output; Sensory neurons, which respond to stimuli such as touch, sound, or light that affect the cells of the sensory organs; Interneurons, which connect neurons within the same region of the brain or spinal cord.

Read About: Longest Dam of India

Name the smallest and largest cell in Human body

Which of the male body’s cells is the largest?

The Neuron is the biggest cell in a human male’s body.

Which cell is the world’s largest cell?

An ostrich egg weighs 1.5 kg and is the largest cell in the living world.

Which human cell is the tiniest?

The Granule Cell of the Cerebellum is the smallest cell in the human body.

What is the size of the largest single cell?

Caulerpa taxifolia, an aquatic alga that can grow to be six to twelve inches long, is the world’s largest single-celled organism.

What is the largest cell in a woman’s body?

The human egg cell is the largest cell in a woman’s body.