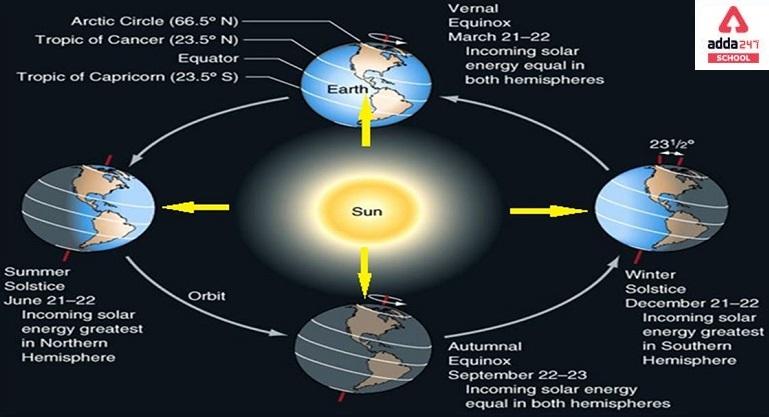 Rotation and Revolution of the Earth

Planets and moons follow elliptical paths around the sun. A planet’s orbital revolution takes one year.

A revolution is a round movement of the Earth around the Sun in a fixed path. The Earth rotates in an anticlockwise motion, from west to east. In one year or 365.242 days, the Earth completes one revolution around the Sun. The earth’s rotational speed is 30 km/s-1.

Every 365.2564 mean solar days, Earth circles the Sun at a distance of around 150 million kilometres. This causes the Sun to appear to travel eastward in relation to the stars at a pace of around 1° every day, or one apparent Sun or Moon diameter every 12 hours. Because of this motion, it takes the Earth 24 hours to complete a full rotation around its axis, allowing the Sun to return to the meridian. Earth’s orbital speed is roughly 29.78 km/s (107,200 km/h; 66,600 mph), which is fast enough to travel a distance of about 12,742 km (7,918 mi) in seven minutes and 384,000 km (239,000 mi) in about 3.5 hours.
Read About: Global Warming
Read About: Afforestation
Read About: Rainwater Harvesting
Read About: Monsoon
Read About: Irrigation System
Read About: Ecosystem

Rotation and Revolution of the Earth around the Sun

The term “revolution” is frequently used interchangeably with “rotation.” However, revolution is referred to as an orbital revolution in many domains, such as astronomy and related subjects. It refers to the movement of one body around another, whereas rotation refers to the movement around an axis. The Moon, for example, revolves around the Earth, and the Earth, in turn, revolves around the Sun.

The term “revolution” is used to describe Earth’s motion (or orbit) through space. Seasonal change and leap years are caused by the Earth’s rotation around the sun. This route is elliptical in shape, including points where Earth is closer to and farther from the sun.

Moreover, a year on Earth is 365 days long, according to the Gregorian calendar, with an extra day added every four years.

The time it takes for an object to revolve around the sun differs depending on the thing. The planet Mercury, for example, revolves around the sun in around 88 days, but the dwarf planet Pluto takes almost 248 years to do it.

However, the Earth’s typical solar day—its rotation period relative to the Sun—is 86,400 seconds (86,400.0025 SI seconds). Because of tidal slowdown, Earth’s solar day is currently slightly longer than it was in the nineteenth century, each day fluctuates between 0 and 2 milliseconds longer than the mean solar day.

FAQs on Rotation and Revolution of the Earth

What is the Earth’s revolution?

What is the significance of revolution to the Earth?

The seasons are determined by the revolution of the Earth.

What are the consequences of the Earth’s revolution?

The Earth’s rotating causes day to turn to night and night to day, and the Earth’s whole rotation/revolution causes summer to turn to winter and vice versa. The Earth’s spinning and revolution, when combined, affect wind direction, temperature, ocean currents, and precipitation, resulting in our daily weather and global climate.

How long does it take for the Earth to go through a revolution?

In 365 days, 5 hours, 59 minutes, and 16 seconds, the Earth revolves around the sun. A year is the length of time it takes for a planet to orbit the sun.

What do we name ‘one Earth revolution’?