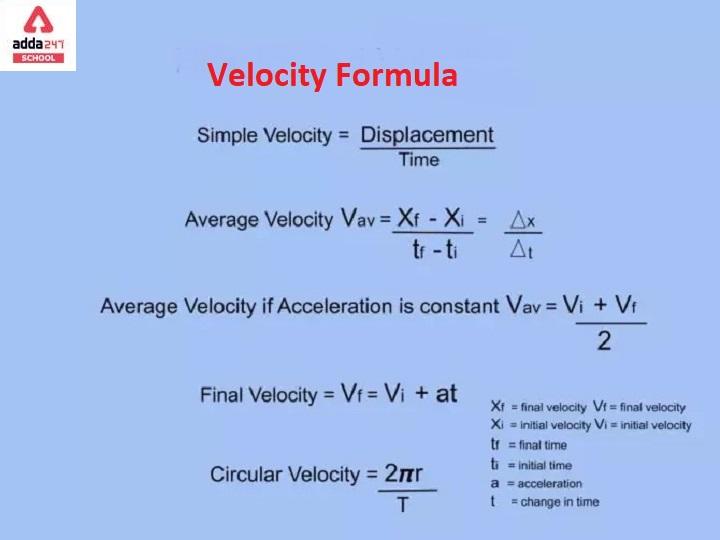 Everyone is aware of Velocity Formula, however, there is a misunderstanding regarding it. The common misunderstanding is that speed and velocity are synonymous, although this is not the case. Furthermore, most individuals confuse the two and use them interchangeably. Furthermore, they are similar but not identical. In this article, we have covered every minimal detail about velocity and also we have covered the formula of velocity. If physics confuses you and you are searching for the definition of velocity and Velocity Formula then this is the right article for you. Bookmark this page to get related topics, we have covered the Velocity Formula in a laymen’s language for a better understanding of students who are stuck in physics and find physics complicated.

The formula of velocity in Physics for Class 9

Velocity Formula- Velocity is the rate of change in displacement with respect to time i.e. it is a measurement of how long it takes an object to travel in a straight line to its destination. Velocity is a two-dimensional vector quantity with magnitude and direction, which means velocity has magnitude and direction. The unit of velocity is meter per second(m\s) and it is represented by V. If students are still confused about what velocity is then we have simplified it more, check the definition given below we have compared the distance with displacement to clear the confusion of student.

It relates to the rate at which displacement changes over time. Furthermore, the velocity is defined by distance and displacement. There will also be no velocity if there is no displacement in the object’s potion and the object does not travel any distance. So, what exactly is the distinction between displacement and distance? The net change in the position of a moving object is referred to as displacement. Distance, on the other hand, refers to the amount of ground covered by a moving item.

v is equal to the average velocity, Δx is displacement, and  Δt is the change in time.

M = Mass of the body/object to be escaped from.

r = Equals the distance from the center of the mass.

Where, u = initial velocity

Where , u = initial velocity

Now we replace θ/t by ω.

Q.  A boy traveling through a car and he covers a distance of 100 km in 2 hours what is the velocity?

As we have discussed earlier the unit of velocity is meters per second and here the units are given in kilometer and hour. so, first, we change the units in meters and seconds then we will apply the formula of velocity. Many students often made this mistake they don’t check the units and they direct apply the formula which is totally wrong and they end up losing marks in the examination.

13.88 m/s is the velocity of the boy to reach the destination.

Solution: In the question, we have given velocity and time, we have to calculate the displacement. Here we have given the exact units so we need not convert the units in meters and seconds.

To calculate displacement we have to alter the formula

So we get displacement here 100 ms, meter-second is the unit of displacement. We don’t need to convert the unit in this question because we have given the desired units.

Q. What is the definition of Velocity?

Velocity is the rate of change in displacement with respect to time. it is a measurement of how long it takes an object to travel in a straight line to its destination.

Q. Velocity is a scalar or a vector quantity?

Velocity is a vector quantity because it has magnitude and direction.

Q. What is the formula of velocity?

The formula of velocity is displacement per time.

Q. What is the unit of velocity?

The unit of velocity is meter/second.