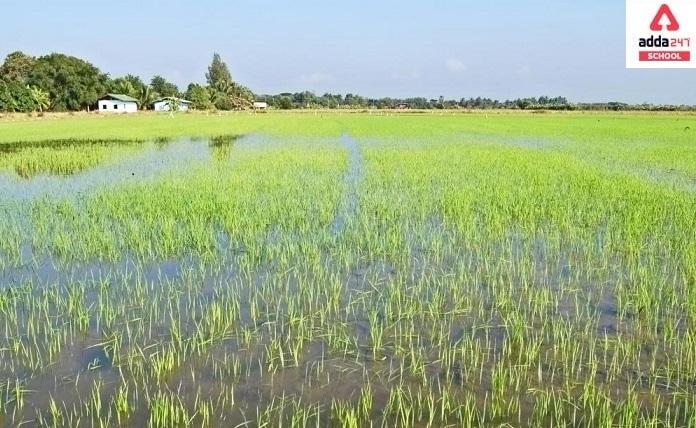 What is irrigation? As explained here, A tasteless and odorless substance, ‘Water’ plays a really important part in the survival of living beings. Be it, humans or plants, or any other living creature, water is needed for life.

The artificial technique of applying controlled amounts of water to land to aid in the development of crops is what the process of irrigation can be described as. Irrigation not only aids in the growth of agricultural crops, but the maintenance of landscapes, and the revegetation of damaged soils. Irrigation also has other uses in crop cultivation, such as frost protection, weed suppression in grain fields, and soil compaction prevention. When compared to overhead irrigation, micro-irrigation requires less pressure and water flow.

What is irrigation?- Describe two methods of irrigation

Irrigation types differ in how water is delivered to the plants. The goal is to apply the water to the plants as evenly as possible, ensuring that each plant receives the exact amount of water it requires. Irrigation can also be classified as either supplemental to rainfall, as it is in many regions of the world, or as “full irrigation,” in which crops are rarely dependent on rainfall. Full irrigation is uncommon, occurring only in arid environments with minimal rainfall or when crops are cultivated in semi-arid regions outside of rainy seasons.

Micro-irrigation is also known as localised irrigation, low volume irrigation, or trickle irrigation. It is a technique in which water is dispersed under low pressure through a piped network in a pre-determined pattern and applied as a small discharge to each plant or to the area around it.

Drip irrigation, often known as trickling watering, accomplishes exactly what it says on the tin. Waterfalls in this system one drop at a time, right where the roots are. Drop by drop, water is given to or near the root zone of plants. This kind of irrigation may be the most water-efficient.

In locations with high water tables, sub-irrigation has been practised in field crops for many years. It’s a technique for artificially increasing the water table and moistening the soil from below the root zone of plants. These systems are frequently integrated with drainage infrastructure and are positioned on permanent grasslands in lowlands or river valleys. It can control the water table by adjusting the water level in a network of ditches using a system of pumping stations, canals, weirs, and gates.

The artificial technique of applying controlled amounts of water to land to aid in the development of crops is what the process of irrigation is.

The four types of irrigation are as follows:

What is irrigation’s primary purpose?

In drier places and during seasons of below-average rainfall, irrigation aids in the growth of agricultural crops, the maintenance of landscapes, and the revegetation of damaged soils.

What form of irrigation system is the most effective?

The most effective and appropriate irrigation system is drip irrigation. Water is applied selectively to the plant root zone, rather than the entire field surface. Drip irrigation’s main purpose is to supply water when plants need it most and at the rates required for healthy plant growth.