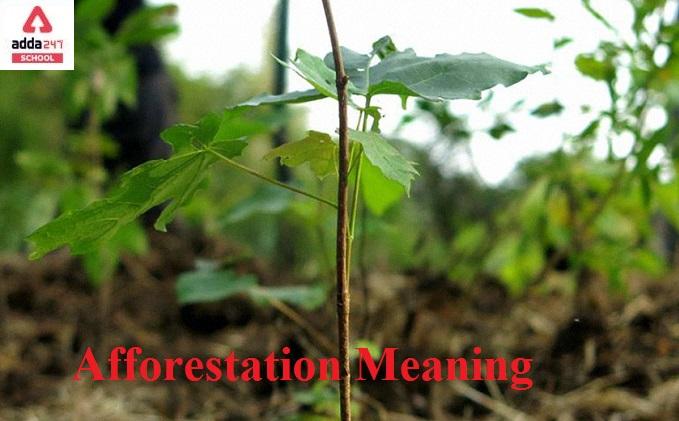 Afforestation Meaning and Definition is explained here. Afforestation is the process of planting a forest or grove of trees in an area that previously had no trees.  Many government and non-governmental groups are directly involved in afforestation efforts to improve carbon capture and develop forests. Afforestation is becoming a more popular strategy for combating climate change because it is known to improve soil quality and organic carbon levels in the soil, preventing desertification.

The process of afforestation begins with the identification of a suitable location. Climate, soil, vegetation, and human activity are only a few of the site’s environmental elements that must be investigated. These criteria will define the site’s quality, which tree species should be planted, and how the trees should be placed.

Following the analysis and selection of the forest site, the area must be readied for planting. Chopping, mounding, bedding, herbicides, and prescribed burning are some of the mechanical and chemical processes used in preparation. Planting might begin when the site has been prepped. Direct seeding, which involves putting seeds directly onto the forest floor, is one form of planting.

Another alternative is seedling transplanting, which again is similar to direct seeding but with the added bonus of a root system. For tree species that can reproduce asexually, a portion of a tree stem, branch, root, or leaves can be planted on the forest floor and sprout successfully, afforestation by cutting is an alternative. Special tools, such as a tree planting bar, are often used to make tree planting easier and faster.

Forests cover 23% of India’s land area. India’s total forest and tree cover climbed to 24.39 per cent, or 8,020. 88 km2, in 2018. Based on biophysical parameters, India’s forests are divided into five broad categories and 16 kinds. Subtropical dry deciduous trees make up 38% of the forest, tropical moist deciduous trees make up 30%, and various smaller groups make up the balance. In a given area, only native species are planted. Fruit-bearing trees are preferred whenever possible due to their ability to provide sustenance.

As part of India’s attempts to tackle climate change, increasing tree cover will help provide extra carbon sinks to satisfy the nation’s Intended Nationally Determined Contribution of 2.5 to 3 billion tonnes of carbon dioxide equivalent through more forest and tree cover by 2030. The Maharashtra government planted around 20 million saplings across the state and plans to plant another 30 million next year. The Indian government has set aside $6.2 billion for tree planting in order to promote “forestation in line with accords made at the Paris climate change summit in 2015,” according to The Telegraph. The CAMPA law was also passed by the Indian government.

Define Afforestation for class 5 to 10

Afforestation has numerous climate-related advantages. Several new studies suggest that forests attract rain, which could explain why droughts are more common in places of the world where trees are sparse, such as western Africa.

What exactly is afforestation?

The act or process of developing a forest, particularly on a territory that has never been wooded before.

When it comes to afforestation vs. deforestation, what’s the difference?

The practice of planting trees in formerly infertile areas is known as afforestation. Deforestation is described as the removal of trees and forests for the sake of human settlement and use.

What is the definition of deforestation?

Deforestation is the loss of forest land for other purposes such as agricultural crops, urbanisation, or mining operations around the world.

What is the purpose of afforestation?

Afforestation’s major goals are to lower CO2 levels in the atmosphere, improve soil quality, and either prevent or reverse desertification.

Why is deforestation a negative thing?

Because the growth of more plants sequesters ambient CO2 and naturally sinks it in their biomass and soil, afforestation efforts have the potential to contribute to negative emissions.