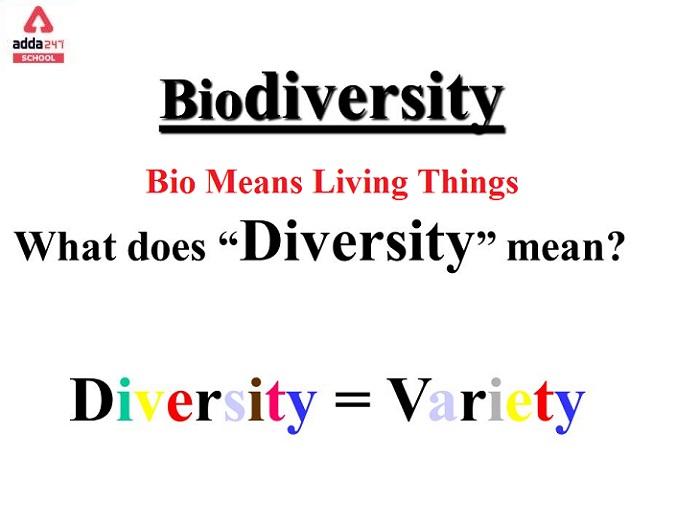 Meaning of Biodiversity in English

Biodiversity Meaning is made up of two words: ‘bio’ and ‘diversity,’ where bio refers to the various sorts of plants, humans, insects, and other organisms, while diversity refers to the diversity of those organisms. In simple terms, “biodiversity” refers to the “variations observed in living creatures” as a result of differences.

‎On Earth, there are many various types of plants, creatures, and other small organisms, and all of these differences are referred to as biodiversity, such as variations in bacteria, fungi, and birds, insects, reptiles, organisms, living beings, and so on.

Biodiversity, the word, is constructed with the help of two words, ‘Bio’ and ‘Diversity’.

According to the Cambridge Dictionary, Biodiversity is “The number and types of plants and animals that exist in a particular area or in the world generally or the problem of protecting this.”

Meaning of Biodiversity and  Types

‎Biodiversity can be categorised as:

Through genetic linkages, every species on Earth is related to every other species. The closer two species are the more genetic information they share and the more similar they appear. Members of an organism’s own species, or organisms with which it has the potential to mate and have children, are its closest relatives.

The variety of species found within a habitat or region is referred to as species diversity. Species are the fundamental units of biological taxonomy and, as such, the standard unit of biological diversity measurement. The word “species richness” refers to the number of different species found in a specific location. The total number of species on the planet is estimated to be between five and ten million, albeit only 1.75 million have been formally named so far.

The intricate network of various species present in particular ecosystems, as well as the dynamic interplay between them, is referred to as ecological diversity. An ecosystem is made up of organisms from various species living in close proximity in a given area, as well as their interactions through the exchange of energy, nutrients, and matter. Interactions between organisms of different species result in these links.

The underlying cause of biodiversity loss is the human population growth, which has now reached seven billion people and is anticipated to double by 2050. Nearly half of all food, crops, medicines and other useful goods created by Earth’s organisms are consumed by humans, yet more than one billion people lack access to sufficient fresh water. But the problem is not sheer numbers of people alone; the unequal distribution and consumption of resources and other forms of wealth on the planet also must be considered.

Also Read: What is natural fiber?

Around the world, efforts are being made to gather and conserve the DNA of endangered organisms. These collections, known as gene banks, can be made up of frozen blood or tissue samples or, in rare situations, live organisms. Biologists use gene banks to expand a species’ gene pool, improving the possibility that it will adapt to the environmental difficulties it faces. Many zoos, aquariums, and botanical gardens collaborate to ensure the genetic diversity of endangered animals and plants in captivity, such as the giant panda, orangutan, and rose periwinkle. Captive animals are periodically released or bred with wild populations in the hopes of enhancing their genetic diversity by breeding freely with members of the wild population. Such gene banks are also important for replenishing crop genetic diversity, allowing plant breeders and bioengineers to improve their stocks’ resistance to disease and changing climate conditions.

FAQs on Meaning of Biodiversity

What is the meaning of biodiversity?

Cambridge Dictionary defines Biodiversity as “The number and types of plants and animals that exist in a particular area or in the world generally or the problem of protecting this.”

What are the three types of biodiversity?

Genetic, species, and ecosystem diversity are the three levels of biodiversity.

Why is biodiversity important?

Biodiversity is a critical measure of an ecosystem’s health. Threats will be handled better by a diverse range of species rather than a small number of them in huge populations.

What are other words for Biodiversity?

Why do we need to conserve biodiversity?

We are placing the lives of animals, plants, and crops, as well as our own, in jeopardy if we do not protect and care for our environment. The ecosystems that make up our environment are all intricately linked.