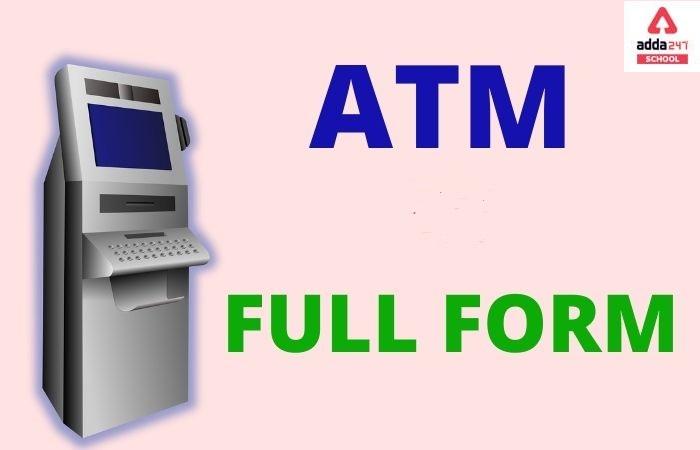 The full form ATM, the abbreviation, is Automated teller Machine. An ATM is a type of electro mechanical machine that contains automated banking platforms that allow customers to conduct transactions without the aid of a teller or branch personnel. Most ATMs allow cardholders to withdraw cash using a debit or credit card.

However, ATMs are not known by the same name everywhere. In several countries, such as Canada, ATMs are referred to as ABMs, or Automatic Banking Machines, and the term banking refers to money transactions.

ATMs are helpful because they do quick self-service activities for the bank clients, such as cash withdrawals, deposits, bill payments, and account-to-account transfers.

ATM Full Form and its History

The first-ever ATM was installed at Citibank in New York in the year 1961. At that time the ATM was known as Bankograph. However, the then customers considered it easier and safer to transact by filling the form or going directly to the bank, due to which the ATM system did not get any special fame. As a result, the ATM installed in Citibank of New York was removed after only 6 months and it was assumed that the ATM machine is not profitable in the banking sector.

However, this confusion was dispelled when an ATM was installed in Japan in the year 1966, due to which the banks benefited a lot. By installing ATMs, the employees of the bank got the free time due to which they could concentrate on other work and there was a huge reduction in the crowd in the banks.  In view of this, ATMs were also installed in other banks of Japan and from there gradually this service started pleasing the people of other countries as well. Thus, almost from the very beginning, the development of ATMs in developed countries was almost uniform.

In just a few years, ATMs had spread around the globe, with a presence in every major country. There are over 3.5 million ATMs in use around the world now.

ATM Full Form and Types of ATMs in English

ATMs are of two types:

Basic Units- Clients can only withdraw cash from basic units, which also display their account balance.

Complex ones- The most complex devices let you deposit cash, make credit card payments and transfers, and view account information.

Read About ACP of Police

Atm Full form in chemistry stands of atmospheric pressure. ATM is defined as the pressure exerted by the weight of the atmosphere, which at sea level has a mean value of 101,325 pascals (roughly 14.6959 pounds per square inch).

An ATM PIN is given to the customer along with the ATM card, which is confidential i.e. you do not have to share that PIN with anyone, it is your own. Using this PIN, you can withdraw money from your card anytime and anywhere by going to an ATM. Without that PIN, you cannot withdraw any amount of money. Thus it is a security feature which is a 4 digit PIN.  For more security, a limitation has been imposed on using the wrong PIN.  Due to which if the wrong ATM PIN has been entered three times then your ATM card gets blocked. At present, ATM security is done through PIN but it is gradually being changed to biometric technology, which might require your fingerprint to withdraw money instead of an ATM PIN, in order to enhance security.

FAQs on Full Form of ATM

What is the full form of ATM?

The full form ATM, the abbreviation, is Automated teller Machine.

What is an ATM?

An ATM is a type of electromechanical machine that contains automated banking platforms that allow customers to conduct transactions without the aid of a teller or branch personnel.

How are ATMs beneficial?

Who is known as the inventor of ATMs?

What are the functions of an ATM machine?