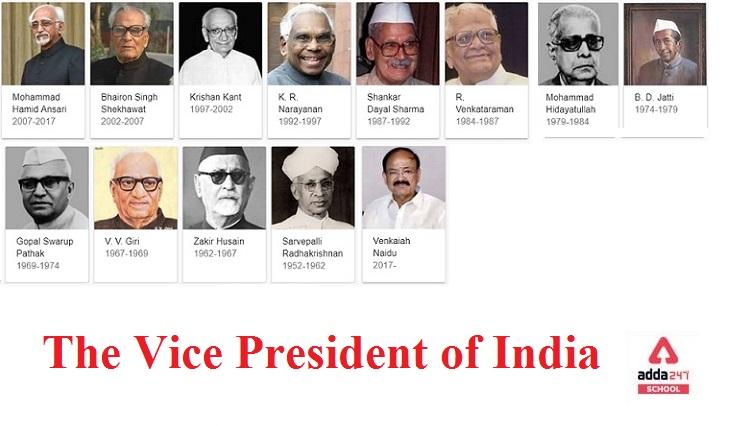 The Vice President of India (Muppavarapu Venkaiah Naidu)is also Rajya Sabha’s ex officio Chairperson. The vice president determines whether a bill is a financial bill or not when it is introduced in Rajya Sabha. If he believes a bill submitted in the Rajya Sabha is a money bill, he will report the matter to the Lok Sabha Speaker.
Read About Mother Teresa

This is a list of India’s vice presidents in order of service:

The Vice President of India: Eligibility

To be eligible for election as Vice President, a person must meet the same criteria as the President:

The Vice President of India: Election

The election is overseen by India’s Election Commission. The election must take place within 60 days of the outgoing Vice President’s term of office expires. For the election, a Returning Officer is appointed. The Returning Officer publishes a public notice of the upcoming election, encouraging candidates to run. Any person who is eligible to be elected and wishes to run for office must be nominated by at least twenty members of parliament as proposers and at least twenty members of parliament as seconders. The Returning Officer examines the nomination papers and adds the names of all eligible candidates to the ballot.

The Vice President of India: Term

The Vice President of India: Removal

The Vice President can be removed from office by a resolution voted by the Rajya Sabha with an effective majority and approved by the Lok Sabha with a simple majority. However, such a resolution cannot be introduced until at least 14 days’ notice has been given. Notably, there are no grounds for removal in the Constitution. No Vice President has ever been impeached, and the deputy chairman of the Rajya Sabha has never been challenged in court.

According to Article 71(1) of the constitution, the Supreme Court has the power to dismiss the Vice President if he or she commits election malpractices or fails to meet the eligibility conditions for a Rajya Sabha member while in office.

It is also the Supreme Court’s responsibility to investigate any suspicions raised about a Vice President’s conduct and, if the Vice President is found to be in contempt of the Constitution, to remove him.
Read About IG of Police

Who was India’s first Vice-President?

Who is India’s current Vice-President?

Is India’s Vice President a member of the Indian Parliament?

Who is a Vice president?