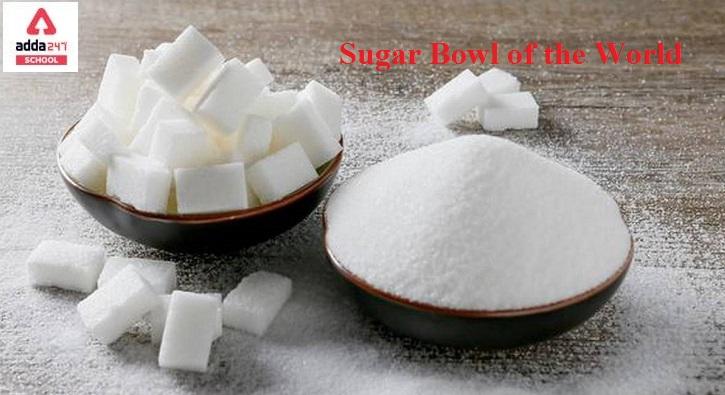 Sugar Bowl of the World: We all know what sugar is, right? We all have a little or some amount of sugar, whether it be food intake, drink intake or some words, that are spoken to us. Sugar is sweet; and who doesn’t know about it? That is the reason why it’s also used in terms or phrases. But somehow, everyone loves ‘Sugar-coated’ stuff, be it food or words. Sugar makes us feel good, especially when we are dieting.
Now, how is sugar made? Where does it come from and where is this ‘Sugar Bowl of the World’?
To answer these, let’s get started with this article.
Which country is known as the sugar bowl of the world
The answer to this question is Brazil. Cuba was one of the largest producers of sugar in the world from a long time and was consistent with this crown of being called the sugar bowl of the world, however, now the title belongs to none other than Brazil.
Brazil is currently recognised as the “Sugar Bowl of the World.” For many years, Brazil has been the world’s top sugar producer. Brazil produced 29.93 million metric tonnes of sugar in 2019-20.
Cuba was formerly known as the “Sugar Bowl of the World.” The majority of its sugar was exported to the Soviet Union. However, after the dissolution of the Soviet Union, the country’s sugar production has plummeted.

The sugar bowl of the world: Brazil

Brazil is the most populous country in South and Latin America. Brasilia is the Brazilian capital. So Paulo is the country’s most populous city. The federation is made up of the union of 26 states and the Federal District, and it is the largest and only country in the Americas to have Portuguese as an official language. It is also one of the most cosmopolitan and ethnically diverse countries in the world.
The World Bank classifies Brazil as an upper-middle-income country. In South America also, it holds the highest percentage of world wealth. It is classified as an advanced developing economy, having the world’s eleventh largest nominal GDP.
It is also one of the world’s major breadbaskets, in addition to being the world’s largest sugar producer. It has also been the world’s largest coffee grower for the past 150 years. Apart from that, Soy, iron ore, pulp (cellulose), maize, cattle, chicken meat, soybean meal, tobacco, cotton, orange juice, footwear, aeroplanes, vehicles, vehicle components, gold, ethanol, and semi-finished iron are some of the other products exported by the country. Coffee is the national drink, and cachaça is the national alcoholic beverage. Cachaça is made from sugar cane and is the key ingredient in Caipirinha, Brazil’s national drink.
Cane sugar had become Brazil’s most important export by the mid-16th century. Sugar was purchased by slaves in Sub-Saharan Africa on the slave market of Western Africa, and it became the country’s most important import. Between 1500 and 1800, early Portuguese Brazil received more than 2.8 million slaves from Africa to help with sugarcane farms due to increased international demand for Brazilian sugar.
Sugarcane exports began to dwindle later, and the discovery of gold in the 1690s would become the colony’s new economic backbone, spawning a Brazilian Gold Rush. It drew tens of thousands of new residents to Brazil.

Read About: Rice Bowl of the world

The state of Uttar Pradesh is referred to as the sugar bowl of India. Let’s all know what sugar is as a piece of basic information. But do we know everything about it? No. So here are a few more things you need to know about sugar.
Sucrose, often known as table sugar, granulated sugar, or normal sugar, is a disaccharide made up of glucose and fructose.
Sucrose is also known as table sugar, granulated sugar, or normal sugar. It is a disaccharide made up of glucose and fructose. Glucose, fructose, and galactose are examples of simple sugars and are often termed as monosaccharides. Disaccharides, most often known as compound sugars, are molecules made up of two monosaccharides. Compound sugars are hydrolyzed into simple sugars in the human body.
Longer monosaccharide chains are not considered sugars. Plants produce starch, which is a glucose polymer. In human food, it is the most plentiful source of energy.
Most plants have sugars in their tissues. Honey and berries are great sources of unrestricted simple sugars. Sugarcane and sugar beet have a high concentration of sucrose. It makes them perfect for commercially effective sugar refinement extraction. The only sugar that cannot be derived from plants is lactose. Mil is the only place where you can find it. Corn syrup is a low-cost sugar source.

Read About: National Vegetable of India

Sugar Bowl of the world: FAQs

Which is the world’s Sugar Bowl?

Brazil is regarded as the World’s Sugar Bowl.

What is the location of India’s sugar bowl?

Which Indian language is known as Kohinoor?

Urdu has been described as one of the world’s most beautiful and intelligent languages.

Which Indian state is known as the Diamond State?

Which city has the nickname “Basket of Eggs”?

Namakkal is the most important egg producer in the Southern Region.