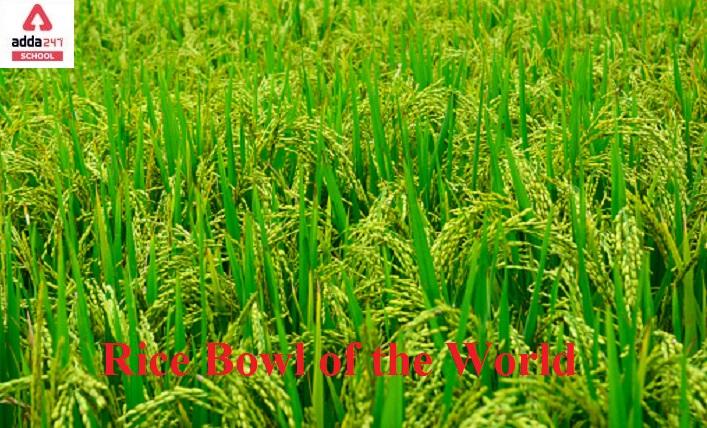 Which Country is called Rice Bowl Of The World?- Rice is the seed of the grass Oryza sativa, which is also known as Oryza glaberrima. Wild rice refers to both wild and domesticated rice species from the genera Zizania and Porteresia. However, the term Oryza can also refer to wild or uncultivated Oryza variants.
Thailand and Vietnam are the world’s rice bowls, despite the fact that it is not officially recognised. Together, these two countries account for 48% of world exports. Moreover, besides Thailand and Vietnam, the top rice exporters list also includes India.
Thailand is a Southeast Asian country. The earliest evidence of rice cultivation may be found in Thailand. Thailand also has the highest proportion of arable land in the world. Rice production takes about 55 percent of the arable land area.
Vietnam is another Southeast Asian country. Vietnam’s economy is mostly centered on agriculture, particularly wet rice growing, and the country is the world’s second-largest rice exporter.
In India, the Krishna-Godavari Delta region has been termed the “Rice Bowl of India” in the past, while the phrase is also applied to Chhattisgarh. In Andhra Pradesh, the East Godavari district is recognized as the state’s rice bowl.

Read About: Example of Herbs

Rice is a monocotyledonous plant. It’s usually grown as an annual flowering plant. It can, however, live as a perennial in tropical climates and produce a ratoon crop for up to 30 years. Rice farming is best suited to countries and locations with cheap labour costs and plenty of rain. It is well-suited to places with cheaper labour and high rainfall because it is labour-intensive to develop and requires a lot of water. Furthermore, with the use of water-controlling terrace systems, rice may be produced almost everywhere. Despite the fact that its parent species are native to Asia and portions of Africa, centuries of trade and export have made it a part of many cultures around the world.
Rice, the seed of the grass Oryza sativa, is the primary source of nutrition for half of the world’s population. Rice cultivation, production, and cultural history could all be factors. It is claimed to have originated in China. Rice is a labour-intensive crop that requires a lot of water, and people relied heavily on agriculture for their livelihood. Rice has long been Asia’s primary producer, and it has religious and cultural significance in many countries. Thailand is the primary exporter, with India being too near for basmati export. However, it is the rice bowl because of its highest output in Vietnam’s Mekong Delta and Red River Delta, which supplies the country’s national income.
Rice is a common food item. It is a vital component of the rural population’s food security. It is primarily grown by small farmers on plots of land smaller than one hectare. Rice is also a wage item for workers in the cash crop and non-agricultural industries. Rice is essential for the nutrition of a large portion of the Asian population, as well as those in Latin America, the Caribbean, and Africa.
Rice is traditionally grown by flooding the fields before or after planting the young seedlings. This basic strategy necessitates careful irrigation planning, but it inhibits the growth of weaker weeds and pest plants that do not flourish in a submerged state, as well as rodents. While flooding is not required for rice production, all other irrigation systems necessitate a greater effort in weed and insect control during growth times, as well as a different approach to soil fertilisation.

Read About: King of Vegetable

Rice cultivation has had a long history. Based on archaeological and linguistic data, the current scientific agreement is that Oryza sativa rice was initially domesticated 13,500 to 8,200 years ago in China’s Yangtze River watershed. Rice spread around the world as a result of migration and trade, first to much of the East Asia, then further afield, and finally to the Americas as part of the Columbian exchange. 3,000 to 3,500 years ago, the Oryza glaberrima rice was independently cultivated in Africa. Other kinds of rice have been cultivated in diverse parts of the world, including the Americas.
Changes in agricultural practise and breeding procedures as a result of the Green Revolution and other agricultural technology transfers have resulted in increasing production in recent decades, with the appearance of novel types like golden rice, which was genetically designed to contain beta carotene.

Read About: National Vegetable of India

The environment, soil qualities, biotic conditions, and regional cultural practices all have an impact on rice growth and output. Rainfall and water-related factors, temperature, photoperiod, solar radiation, and, in some cases, tropical storms, are all environmental elements. Soil considerations include not just soil type but also the location in the uplands or lowlands. Weeds, insects, illnesses, and crop types are all dealt with by biotic factors.
Rice can be grown in a variety of conditions, depending on the availability of water. Although rice does not thrive in a wet environment, it can survive and grow here, as well as endure floods.

FAQs on Rice Bowl of The World

Which Indian region is recognised as the rice bowl?

The Krishna-Godavari Delta region is known as India’s Rice Bowl, as it produces the most rice in the country.

Which Asian country has been crowned the title of the rice bowl?

What part of China is known as the “rice bowl”?

Sichuan, Yunnan, and Guangxi are China’s rice bowls, with mild weather and plenty of rain.

Which Indian state is known as the “Egg Bowl of Asia”?

What is the ideal climate for rice?

Which Indian region is recognised as the rice bowl?

The Krishna-Godavari Delta region is known as India's Rice Bowl, as it produces the most rice in the country.

Which Asian country has been crowned the title of the rice bowl?

What part of China is known as the "rice bowl"?

Sichuan, Yunnan, and Guangxi are China's rice bowls, with mild weather and plenty of rain.

Which Indian state is known as the "Egg Bowl of Asia"?

What is the ideal climate for rice?