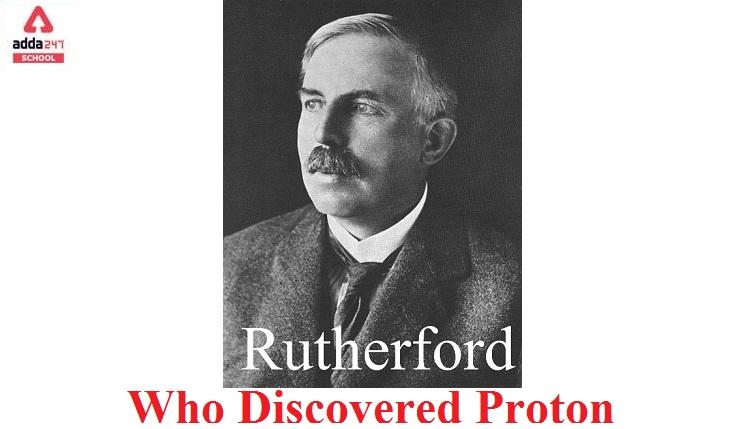 Who discovered proton rutherford or goldstein?

Who Discovered Proton? A proton is a subatomic particle having a mass slightly less than that of a neutron and a positive electric charge of +1e elementary charge. Protons and neutrons, each with a mass of around one atomic mass unit, are referred to collectively as “nucleons.”

Who discovered protons according to  NCERT Class 9?

Ernest Rutherford published his discoveries demonstrating the existence of the proton, almost a hundred years ago. For decades, the proton was thought to be a fundamental particle. However, tests have revealed that the proton has a complicated internal structure that varies on how you look at it, or rather how hard you hit it. It is since researchers at the SLAC and DESY laboratories began firing electrons into protons in the 1960s. However, a century later, there is still plenty to discover about the proton. Read in-depth articles about what we know and don’t know about the proton in the newest edition of the CERN Courier.

The 1919 book “Rutherford, Transmutation, and the Proton” chronicles the circumstances that led to Ernest Rutherford’s discovery of the proton. In “The proton laid bare,” is about scientists’ concepts regarding proton.
Read About: Ozone Hole

Who discovered proton goldstein or rutherford?

Canal rays were discovered in 1886 by Eugen Goldstein, who demonstrated that they were positively charged particles (ions) created by gases. However, unlike the negative electrons found by J. J. Thomson, particles from different gases had varying charge-to-mass ratios (e/m) and so could not be identified with a single particle. In ionised gases, Wilhelm Wien identified the hydrogen ion as the particle with the highest charge-to-mass ratio in 1898.

Prout’s idea that hydrogen was the building block of all elements impacted Rutherford, who recognised hydrogen to be the simplest and lightest element. Rutherford gave the hydrogen nucleus H+ a special designation as a particle after discovering that the hydrogen nucleus is present in other nuclei as an elementary particle. He suspected that hydrogen, the lightest element, had only one of these particles. He named this new nucleus fundamental building blocks the proton, after the neuter singular of the Greek word “first,” v. Rutherford, on the other hand, was thinking of Prout’s word protyle.

Who discovered proton in which year and when?

Beginning on August 24, 1920, Rutherford presented at the British Association for the Advancement of Science’s Cardiff meeting. The nitrogen reaction was first proposed by Rutherford as 14N + 14C + + H+. Oliver Lodge asked him for a new term for the positive hydrogen nucleus at the meeting to avoid misunderstanding with the neutral hydrogen atom. He proposed both proton and proton at first. Following Prout’s word “protyle,” Rutherford later claimed that the meeting had accepted his recommendation that the hydrogen nucleus is dubbed “proton.” The term “proton” was first used in the scientific literature in 1920.
Read About: Global Warming

FAQs on Who Discovered Proton?

Who is known as the father of Proton?

Ernest Rutherford is known as ‘the father of proton’.

Is it true that Goldstein was the first to discover the proton?

Eugene Goldstein, a physicist, discovered evidence of ‘this positively charged particle’ in 1886.

Who was the first to discover the electron?

In the year 1885, Sir William Crookes was the one who discovered the electron.

Who was the first to discover the neutron?

James Chadwick stated in May 1932 that the core also included a new uncharged particle known as the neutron.

What was Goldstein’s method for discovering the proton?