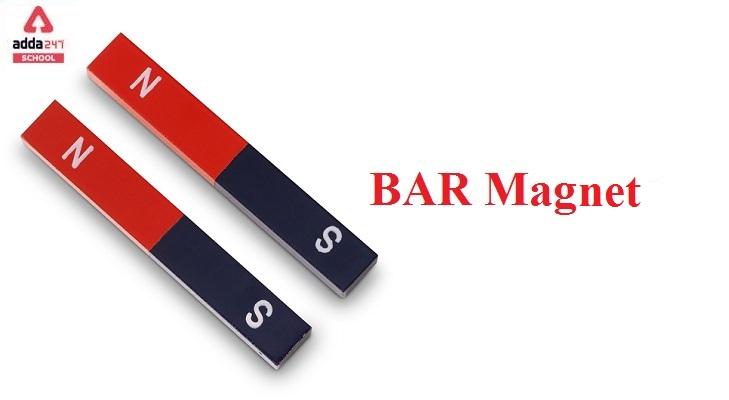 Bar Magnet – Uses and Properties: A magnet is anything that generates a magnetic field. This magnetic field is invisible, but it is responsible for a magnet’s most notable property, a force that attracts or repels other ferromagnetic materials such as iron, steel, nickel, cobalt, and other magnets.

A bar magnet is a rectangular portion of an object with permanent magnetic properties formed of iron, steel, or any other ferromagnetic substance or ferromagnetic composite. It has two poles, one north and one south, and when suspended freely, the magnet aligns itself so that the northern pole points to the earth’s magnetic north pole.

Bar Magnet: As an equivalent Solenoid

A solenoid is a type of electromagnet that produces regulated magnetic fields by running an electric current through it. It is a coil with a length greater than its diameter. A bar magnet can be proven as a solenoid by calculating the axial field of a finite solenoid carrying current.

Now, take a look at the properties that a magnetic field has:

What are bar magnets and how do you use them?

A rectangular section of the object is called a bar magnet. Iron, steel, or any other ferromagnetic substance or ferromagnetic composite make up this device.

What are the uses of a bar magnet?

Bar magnets are used to pick up small metallic objects such as metal shavings, nails, and screws, as well as magnetic stirring rods in laboratory applications and refrigerator magnets.

Is a permanent magnet an electromagnet?

An electromagnet is a temporary magnet that generates a magnetic field by passing electric current via a coil coiled around a soft iron core.

What exactly is the distinction between a magnet and a bar magnet?

Which magnet is more powerful: a bar magnet or a horseshoe magnet?

Because of their form, horseshoe magnets are more powerful than bar magnets.