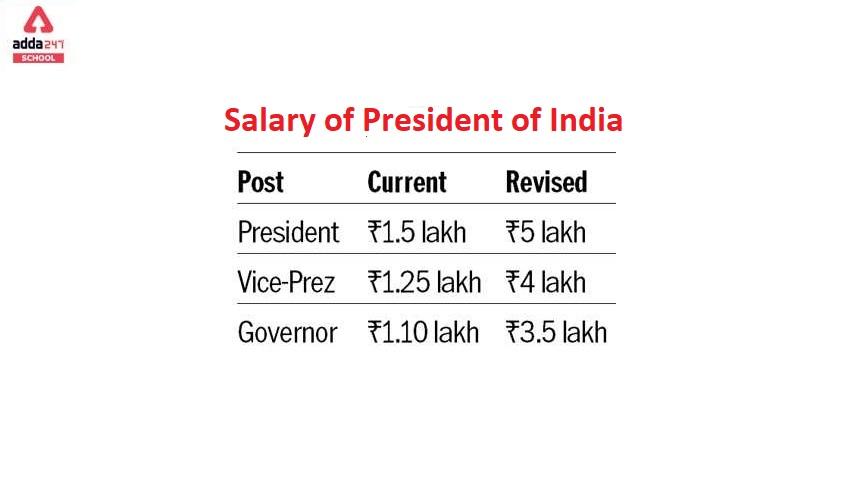 Salary of President of India

On September 11, 2008, the Indian government increased the president’s salary to 1.5 lakh rupees (approximately to 3.9 lakh in 2022). In India’s 2018 Union budget, this compensation was increased to 5 lakh (equivalent to 5.9 lakh in 2022). The President of India is the Republic of India’s head of state. The president is both the titular head of state and the commander-in-chief of the Indian Armed Forces.

What is the Salary of the President of India

The president’s formal house, Rashtrapati Bhavan, is the world’s largest presidential palace. The Rashtrapati Nilayam in Bolarum, Hyderabad, and the Retreat Building in Chharabra, Shimla, are the president of India’s official retreat residences. A custom-built, heavily armoured Mercedes Benz S600 (W221) Pullman Guard serves as the president’s official state car. Former presidents, as well as their widows and widowers, are eligible for benefits such as pensions, furnished housing, security, and different allowances.

Salary of Vice President of India 2022

The President of India

The president’s office was established when India became a republic on January 26, 1950, when its constitution went into effect. The president is elected indirectly by an electoral college that includes both houses of India’s Parliament as well as the legislative assemblies of each of the country’s states and territories, all of whom are directly elected.

Despite the fact that Article 53 of the Indian Constitution states that the president may exercise his powers directly or through a subordinate authority, all of the president’s executive powers are, in practise, exercised by the prime minister (a subordinate authority) with the assistance of the Council of Ministers. The president is required under the constitution to act on the prime minister’s and cabinet’s advice as long as it does not contradict the constitution. Ram Nath Kovind is the 14th and current President of the Republic of India, having taken office on July 25, 2017.

Powers of the President of India

According to the Father of Indian Constitution, Dr. BhimRao Ambedkar, The President, in the draught constitution, holds the same position as the King in the English Constitution. He is the President of the Republic, but not the Executive. He is the Nation’s representative, but he is not the Nation’s ruler. He is the country’s symbol. In the administration, he serves as a ceremonial element on a seal that announces the nation’s decisions.

Legislative Power of the President of India

To expedite the lawmaking process, the Constitution of India has placed legislative power in the Parliament of India, of which the president is the head. The president calls both houses of parliament together and prorogues them. He has the power to dissolve the Lok Sabha. According to Article 87, the president addresses parliament after the general elections and also at the start of the first session every year (1). On these occasions, the president’s address is usually intended to lay forth the government’s new policies.

Executive Powers of the President of India

Judicial Powers of the President of India

According to Article 60, the president’s principal responsibility is to preserve, safeguard, and defend the Indian constitution and law. On the advice of the Chief Justice of India, the president appoints the Chief Justice of India and other judges. A two-thirds vote of the two Houses of parliament is required for the President to dismiss a judge. The Attorney General of India, the Indian government’s top legal counsel, is appointed by the president of India under Article 76(1) and serves at the president’s pleasure. If the president believes a legal challenge or a problem of public interest has arisen, he may seek the Supreme Court’s advisory opinion under Article 143. According to Article 88, the president can request that the attorney general attend the parliamentary proceedings and report any illegal activity to him.

Eligibility for the President of India

Article 58 of the constitution lays out the basic requirements for running for president. A president must possess the following qualities:

Certain officeholders, on the other hand, are allowed to run for president. These are the following:

What is the salary of the president?

What is the salary of MP of India?

Over the course of 2015, India paid 176 crore (equivalent to 226 crore in 2020) in wages and expenditures to its 543 Lok Sabha members, or little over 2.7 lakh (equivalent to 3.5 lakh in 2020) per month each Member of Parliament, including pensions to dependents of ex-MPs. The Members of Parliament Act, 1954 governs the salaries, allowances, and pensions of Lok Sabha members.

What is the salary of PM Modi?

According to the Prime Minister’s Office, the prime minister does not receive a formal salary and instead receives monthly allowances. In the same year, The Economist stated that the prime minister was paid the equivalent of $4106 per year in purchasing power parity. This is the lowest of all countries when measured as a percentage of per-capita GDP (gross domestic product). The Economist conducted a poll.