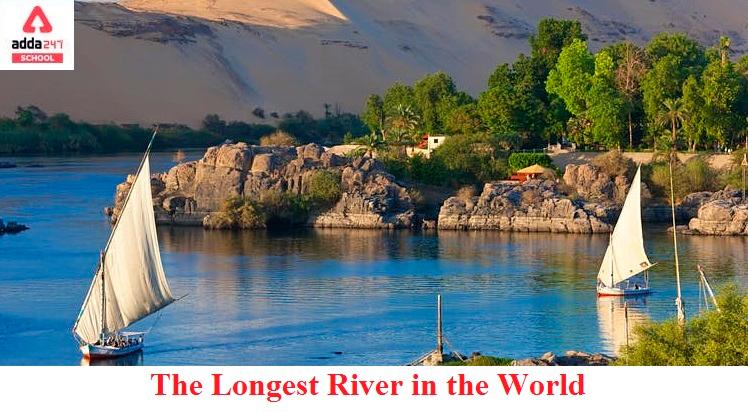 Which is longest river in the world?

The longest river in the world: We are always curious about knowing things, aren’t we? We do want to know what is the first, the best, the largest, the longest, the widest, the smallest and so on! Here is a vivid account of the longest river in the world. So, let’s get started and know about the world’s longest river’s name, the place it is located, the area it surrounds and the lengths it covers. Apart from these, there are various other details mentioned as well, so we ask you to read them carefully because who knows what you’re going to be asked next at your quiz competition? or at your work? or even by a nosey uncle or aunt at a family function? Leaving these jokes aside, Let’s get started!
which is the longest river in the world
The Nile River in Africa is the world’s longest river. It is 6,853 kilometres long and passes through Kenya, Ethiopia, Uganda, Rwanda, Tanzania, Sudan, Burundi, and Congo-Kinshasa, in addition to Egypt. In ancient Egyptian dynasties, it was the primary supply of irrigation and freshwater.

Read About: The Longest Dam in India

Longest River in the World

The Nile is a major north-flowing river in northeastern Africa that has historically been regarded as the world’s longest river. The Nile, Africa’s longest river, empties into the Mediterranean Sea. The Nile is approximately 6,650 kilometres long, with a drainage basin that spans eleven nations. Kenya, Ethiopia, Tanzania, Uganda, the Democratic Republic of the Congo, Eritrea, South Sudan, Rwanda, Burundi, Republic of Sudan, and Egypt are the eleven nations that make up the Nile’s drainage basin. Egypt, Sudan, and South Sudan all rely on the Nile as their principal source of water.
The White Nile and the Blue Nile are two important tributaries of the Nile. The White Nile begins in Jinja, Uganda, on Lake Victoria, and is considered the Nile’s headwaters and major stream. The White Nile is a long river that flows through the Great Lakes region. Furthermore, the Blue Nile provides the majority of the water. The Blue Nile contains 80% of the water and silt in the Nile. The Blue Nile starts in Lake Tana in Ethiopia and flows southeast into Sudan.

Read About: The Rice Bowl of The World

Name of the longest river in the world

The terms “White Nile” and “Blue Nile” refer to the river’s source and are derived from Arabic names that were formerly solely used to the Sudanese portions that meet in Khartoum.
The Nile is known as Hapy or Iteru in ancient Egyptian, which means “river.” The Coptic word piaro or phiaro, which meaning “river” and originates from the same ancient name, implies “the river.”
The river is known in Nobiin as man Daw, which means “big water.”
Kiira or Kiyira is the name of the river in Luganda.
The Nile is referred to as en-Nl in Egyptian Arabic and an-Nl in Standard Arabic. It is Ha-Ye’or or Ha-Shior in Biblical Hebrew.
The English word Nile, as well as the Arabic names en-Nîl and an-Nîl, are derived from Latin and Ancient Greek, respectively.
Another Nile etymology could be linked to the Sanskrit name Nil, which alludes to Indigofera tinctoria, one of the first suppliers of indigo colour. Another possibility is Nymphaea caerulea, sometimes known as “The Sacred Blue Lily of the Nile,” which was discovered spread across Tutankhamen’s body during the 1922 excavation.
Another possibility is that it comes from the Semitic word Nahal, which means “river.” The term lilu, which means water in ancient Libyan, was used.

Read About: The sugar bowl of the world

Tributaries of longest river in the world

John Goddard, an American, and two French explorers became the first to successfully cross the whole Nile river in 1951, and their 9-month voyage was chronicled in the book Kayaks down the Nile.
The White Nile Expedition, commanded by Hendrik Coetzee of South Africa, travelled the whole 3,700-kilometer length of the White Nile. The voyage set sail on the White Nile on January 17, 2004, from Lake Victoria in Uganda, and landed safely in Rosetta, Egypt, four and a half months later.

From December 25, 2003, to April 28, 2004, the Blue Nile Expedition took 114 days to descend the whole Blue Nile, a 5,230-kilometer expedition. Les Jickling of Canada and Mark Tanner of New Zealand made the first human-powered crossings of Ethiopia’s the Blue Nile on January 29, 2005. It took them five months to go over 5,000 kilometres. They claim to have paddled across two combat zones, including areas known for bandits and were apprehended at gunpoint.

FAQs based on Which is longest river in the world

Which Egyptian god was in charge of the Nile’s flooding?

Hapi was the most important of several personifications of natural fertility, and his power grew stronger throughout Egyptian history.

Is HAPI a girl or a boy?

Hapi, the Egyptian god of fertility, was a human-headed figure who was typically represented as androgynous, or half-male, half-female.

Horus is the god of?

Horus was thought to be the deity of war and the sky in the early stages of ancient Egyptian religion.

Is the Nile River on its last legs?

In the face of multiple tough environmental difficulties, the Nile River, the world’s longest at 4,258 kilometres, is dwindling.

What really is Hathor?

Hathor was a goddess of the sky, women, fertility, and love in ancient Egyptian religion.