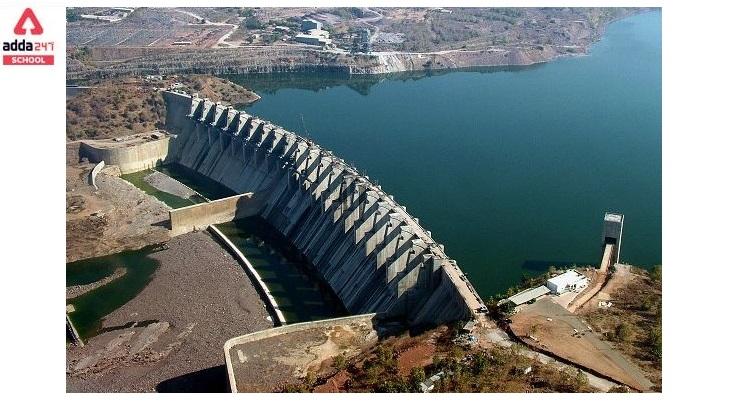 Read About: Rice Bowl of the world

Which is the longest dam in India?

A dam is a structure that controls or prevents the flow of surface water or, in some cases, subsurface streams. Dams generate reservoirs that provide water for a variety of uses, including irrigation, human consumption, industrial use, aquaculture, and navigation. Hydropower is frequently utilised to generate electricity in conjunction with dams. A dam can also be used to gather water and distribute it evenly between several sites. Dams are mostly used to keep water from flowing away. Other structures, such as floodgates and levees, are used to control or block the flow of water into certain geographical areas. The Jawa Dam in Jordan is the oldest known dam. It was created around 3,000 BC.
The first large dam was built in Egypt in 1902, with the construction of the Aswan Low Dam. Following their conquest and annexation of Egypt in 1882, the British began building in 1898 on a project designed by Sir William Willcocks and including several of the time’s leading engineers. Nothing on this scale had ever been tried before when it was built between 1899 and 1902. It was the world’s largest masonry dam.
The Hoover Dam is a huge structure. It’s a gravity dam with a concrete arch. During the Great Depression, the Hoover Dam was built in the Black Canyon of the Colorado River between 1931 and 1936.
There were an estimated 800,000 dams in the world in 1997. Approximately 400,000 of the 800,000 dams were taller than 15 metres.

Read About: King of Vegetable

Hirakud Dam, India’s longest dam, is built on the Mahanadi River. This dam is located in the state of Odisha in India. This dam is certainly unique among India’s dams. Hirakud Dam is located in the Odisha district of Sambalpur. This is a landmark following the country’s independence, located 15 kilometres from Sambalpur. The Mahanadi River has to be controlled. The Mahanadi delta was flooded to the point of destruction. Behind the dam, there is a lake that exists. Until the river’s flowing water is reserved, it is of no use. As a result, dams stop the river from flowing and store the water for later use.
The Hirakud Dam is more than a dam; it is a source of national pride. This was India’s first river valley project after independence. It is a historic project that has brought honour to the country. This project was a great achievement since it enabled India to become self-sufficient. The dam covers a total area of 743 square kilometres, making it one of Asia’s largest artificial lakes. This dam also provides a good 21-kilometre stretch along the dykes, as seen from a tourism perspective. It’s the perfect length for a lengthy trip. The larger-than-life structure may be felt by the audience. The dam’s huge and breathtakingly gorgeous water transports your heart to the wonders of water.
The Hirakud Dam is a masonry, concrete, and earthen structure. It spans the river spandan and is India’s longest main earthen dam, including dykes. The main dam is situated between two hills, the Laxmidungri on the left and the Chandili Dunguri on the right, with the Laxmidungri on the left and the Chandili Dunguri on the right. On both sides of the dam, 21 kilometres of earthen dykes close the low saddles beyond the neighbouring hills. The dam and dykes cover a total distance of 25.8 kilometres. It also serves as India’s largest manmade lake. With a shoreline of over 639 kilometres, the reservoir can hold 743 kilometres of water at full capacity. The dam has two observation towers, one on each side, known as “Gandhi Minar” and “Jawahar Minar.” The towers provide a panoramic sight.

Which of India’s post-independence dams is the longest?

Hirakud Dam is India’s longest and also the country’s first dam after independence.

Which dam is the world’s largest?

Tehri Dam, in Uttarakhand, was constructed across the Bhagirathi River in 2006. It is India’s largest and tallest dam.

Which of India’s masonry dams is the largest?

The Hirakud Dam, located on the Mahanadi River, is India’s largest masonry dam.

What exactly is a dam?

A dam is a structure that restricts or stops the flow of water.