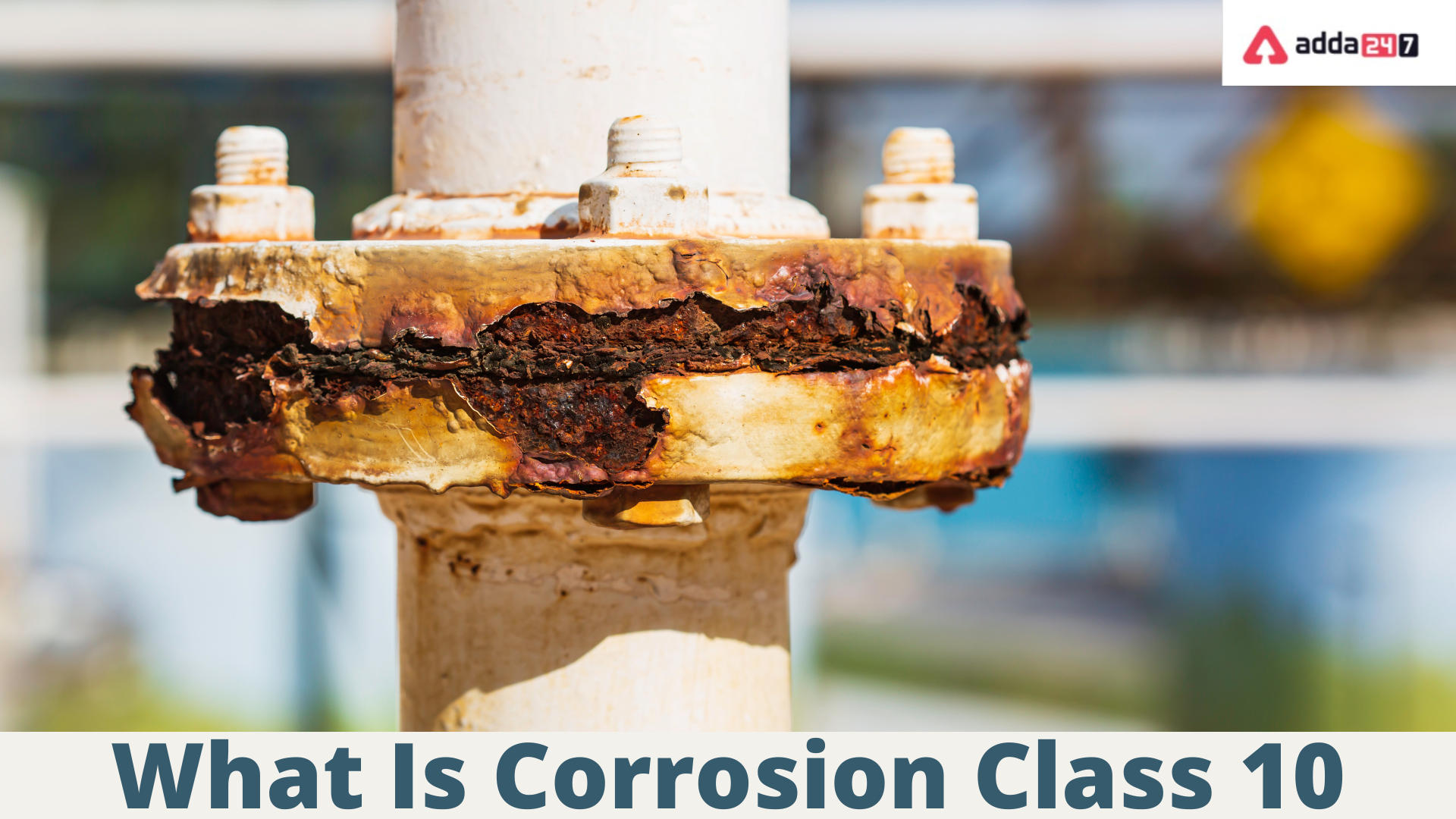 Corrosion is one of the most common phenomena that we observe in our daily lives.  You must have noticed that some objects made of iron are covered with an orange or reddish-brown coloured layer at some point in time. The formation of this layer is the result of a chemical process known as rusting, which is a form of corrosion.

What Is Corrosion? in Chemistry

Cossorion, in general, is a process through which refined metals are converted into more stable compounds such as metal oxides, metal sulfides, or metal hydroxides. Likewise, the rusting of iron involves the formation of iron oxides via the action of atmospheric moisture and oxygen. If we look at the science behind corrosion then we can say that it is a spontaneous/ irreversible process wherein the metals turn into a much stable chemical compound like oxides, sulphides, hydroxides, etc. We shall delve deeper into the concept of corrosion and understand its different factors including its meaning, types, prevention and more in this lesson.

What Is Corrosion?- Definition

What is Corrosion?- It is basically defined as a natural process that causes the transformation of pure metals into undesirable substances when they react with substances like water or air. This reaction causes damage and disintegration of the metal starting from the portion of the metal exposed to the environment and spreading to the entire bulk of the metal.

Corrosion is usually an undesirable phenomenon since it negatively affects the desirable properties of the metal. For example, iron is known to have good tensile strength and rigidity (especially alloyed with a few other elements). However, when subjected to rusting, iron objects become brittle, flaky, and structurally unsound. On the other hand, corrosion is a diffusion-controlled process and it mostly occurs on exposed surfaces. Therefore, in some cases, attempts are made to reduce the activity of the exposed surface and increase a material’s corrosion resistance. Processes such as passivation and chromate conversion are used. However, some corrosion mechanisms are not always visible and they are even less predictable. Alternatively, corrosion can be classified as an electrochemical process since it usually involves redox reactions between the metal and certain atmospheric agents such as water, oxygen, sulphur dioxide, etc.

What Is Corrosion of Metals?

What Is Corrosion?- Factors Affecting Corrosion

What Is Corrosion Rate?

The Deal–Grove model is often used to describe the formation of an oxide layer. This model helps in predicting and controlling oxide layer formation in a lot of diverse situations. Alternatively, the weight loss method is also used to measure corrosion. In this method, a clean weighed piece of the metal or alloy is exposed to the corrosive environment for a certain duration. This is followed by a cleaning process that removes the corrosion products. The piece is then weighed in to determine the loss of weight.

The rate of corrosion (R) is calculated as;

W = weight loss of the metal in time t,

A = surface area of the metal exposed,

What Is Corrosion?- Types

Some of the corrosion types include;

Stress Corrosion Cracking can be abbreviated to ‘SCC’ and refers to the cracking of the metal as a result of the corrosive environment and the tensile tress placed on the metal. It often occurs at high temperatures.

Intergranular corrosion occurs due to the presence of impurities in the grain boundaries that separate the grain formed during the solidification of the metal alloy. It can also occur via the depletion or enrichment of the alloy at these grain boundaries.

When there exists an electric contact between two metals that are electrochemically dissimilar and are in an electrolytic environment, galvanic corrosion can arise. It refers to the degradation of one of these metals at a joint or at a junction. A good example of this type of corrosion would be the degradation that occurs when copper, in a salt-water environment, comes in contact with steel.

Example: When aluminium and carbon steel are connected and immersed in seawater, aluminium corrodes faster and steel is protected.

Pitting Corrosion is very unpredictable and therefore is difficult to detect. It is considered one of the most dangerous types of corrosion. It occurs at a local point and proceeds with the formation of a corrosion cell surrounded by the normal metallic surface. Once this ‘Pit’ is formed, it continues to grow and can take various shapes. The pit slowly penetrates metal from the surface in a vertical direction, eventually leading to structural failure it left unchecked.

Example: Consider a droplet of water on a steel surface, pitting will initiate at the centre of the water droplet (anodic site).

This is considered the most common form of corrosion wherein an attack on the surface of the metal is executed by the atmosphere. The extent of the corrosion is easily discernible. This type of corrosion has a relatively low impact on the performance of the material.

Example:  A piece of zinc and steel immersed in dilute sulphuric acid would usually dissolve over its entire surface at a constant rate.

This is a corrosion of the piping by grooves that are formed due to the interaction of a corrosive agent, corroded pipe constituents, and hydrogen gas bubbles. The bubbles usually remove the protective coating once it comes in contact with the material.

Metal dusting is a damaging form of corrosion that occurs when vulnerable materials are exposed to certain environments with high carbon activities including synthesis gas. The corrosion results in the break-up of bulk metal to metal powder. Corrosion occurs as a graphite layer is deposited on the surface of the metals from carbon monoxide (CO) in the vapour phase. This graphite layer then goes on to form meta-stable M3C species (where M is the metal) that usually moves away from the metal surface. In some cases, no M3C species may be observed. This means that the metal atoms have been directly transferred into the graphite layer.

Microbial corrosion which is also known as microbiologically influenced corrosion (MIC), is a type of corrosion that is caused by microorganisms. The most common one is chemoautotrophs. Both metallic and non-metallic materials either in the presence or absence of oxygen can be affected by this corrosion.

High-temperature corrosion as the name suggests is a type of corrosion of materials (mostly metals) due to heating. Chemical deterioration of metal can occur due to a hot atmosphere that contains gases such as oxygen, sulfur, or other compounds. These compounds are capable of oxidizing the materials (metals in this case) easily. For example, materials used in car engines have to resist sustained periods at high temperatures during which they can be affected by an atmosphere containing corrosive products of combustion.

What Is Corrosion in Iron is Called Rusting?

Corrosion of elemental iron and its alloys, such as steel, is known as rusting. Corrosion can have a varying degree of effect on a lot of things. As such, it mainly causes waste of natural resources. Additionally, it can further cause hazardous situations such as building structures becoming weak and unstable, accidents caused by corroded parts as well as other unwanted failures such as cracked pipelines, bridge collapsing, transport vehicle crashes or other catastrophes. It is therefore important to check and prevent corrosion at all costs.

Preventing corrosion is of utmost importance in order to avoid huge losses. The majority of the structures that we see and use are made out of metals. This includes bridges, automobiles, machinery, household goods like window grills, doors, railway lines, etc. While this is a concerning issue, several treatments are used to slow or prevent corrosion damage to metallic objects. This is especially done to those materials that are frequently exposed to the weather, saltwater, acids, or other hostile environments. Some of the popular methods to prevent corrosion include;

What is corrosion?- FAQs

Question 1 What is corrosion?

Ans. Corrosion is a natural phenomenon of conversion of metal into a more stable chemical oxide.

Question 2 Do all metals corrode?

Ans. No, all metals do not corrode. The metals which are higher in the reactivity series of metals corrode easily as their oxidation potential is high. For example, iron.