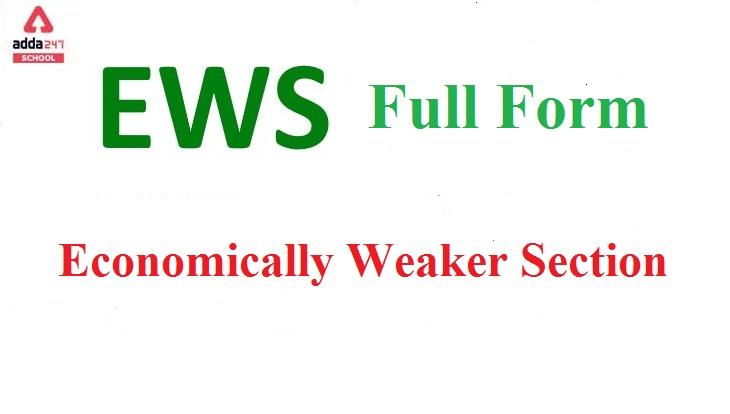 EWS Full Form- The full form of EWS, the abbreviation, is used for the term, Economically Weaker Section. In India, the Economically Weaker Section (EWS) is a subgroup of individuals who fall into the Economy Based Un-Reserved Category and have an annual family income of less than Rs. 8 lakh but do not fall into any of the other categories such as SC/ST/OBC in India or MBC in Tamil Nadu. Candidates who do not fall within the SC/ST/OBC categories but meet the EWS economic requirements will be considered for the EWS category.
Read About: Wi-Fi Full Form

The Union Government of India introduced the Constitution (One Hundred Third, 103rd CAA) Bill, 2019, which included a 10% quota for EWS students to the previously unreserved or general category pupils.

State governments may further increase the income ceiling for candidates seeking EWS reservations, which will be valid only in state-owned universities and state government employment as considered appropriate by the states.

Since 1 February 2019, people from the Economically Weaker Section have been given 10% quota in India’s education and government positions, comparable to OBC, SC, and ST.

EWS applicants are dissatisfied with this reservation since it does not contain numerous perks from the start, such as age relaxation, fee relaxation, post-metric scholarship, and housing requirements.

The Economically Weaker Section (EWS) Category certificate is only for those candidates who belong to General Category.
Read About: TRP Full Form

The Union Council of Ministers authorised a 10% reservation for the Economically Weaker Section (EWS) in government positions and educational institutions in the General category on January 7, 2019. The cabinet determined that this would be in addition to the existing 50% reserve for SC, ST, and OBC groups.

On January 9, the Rajya Sabha, India’s upper parliament, enacted the Constitution (One Hundred and Twenty-fourth Amendment) Bill after it was introduced in the Lok Sabha, on January 8, 2019, and passed the same day. On January 12, 2019, President Ram Nath Kovind granted his approval to the bill, and it was published in the Gazette, making it law.

In January 2019, Youth For Equality, an organisation that opposes caste-based laws, filed a petition with the Supreme Court of India, claiming that the proposed change violates the court’s 50 per cent reservation threshold. The organisation stated that it completely supports EWS reserves, but that they should be implemented by transforming the current OBC quota of 27 per cent into an economic means-tested, non-caste-based quota. Leaders of Backward Classes welfare organisations, on the other hand, addressed the Supreme Court, saying that EWS groups did not fulfil the reservations requirements that the same court had established in a previous case.

The Supreme Court, on the other hand, refused to suspend the GEN-EWS category’s 10% reservation in government employment and educational institutions. The court decided on a five-member bench to hear the case on August 6, 2020.

How can I get an EWS certificate?

An application for an EWS certificate can be submitted either online or offline. It is up to the state government to decide. To submit an online application, go to the issuing authority’s official website.

What exactly is an EWS certificate?

This certificate is available as part of the EWS advantages of reservation and may be obtained by presenting an Income and Asset Certificate issued by a Competent Authority.

Who is eligible for the EWS programme?

The candidate’s family’s annual income must be less than Rs. 8 lakhs. Their family cannot have more than 5 acres of farmland. The size of the residential flat should be less than 1000 square feet.

Who has the authority to grant an EWS certificate?

Your local government body can provide you with an EWS certificate (Tehsil).

Is there a difference between an income certificate and an EWS certificate?

No, they are not the same. EWS certificates are income and asset certificates given to those who are economically disadvantaged. The income certificate, on the other hand, verifies your earnings for the previous year.