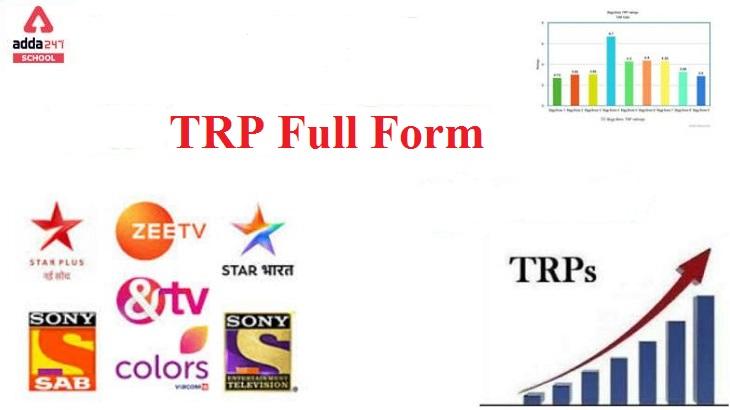 TRP Full Form – Target Rating Point: The full form of TRP, the abbreviation is Target Rating Point. A target rating point is a marketing and advertising metric that compares target audience impressions of a campaign or commercial delivered through a communication medium to the population size of the target audience. In the case of television, a gadget is attached to the television set in the homes of a few thousand viewers to quantify impressions. These figures are taken as a sampling of all TV owners in various geographic and demographic groups. During the show, a special code is broadcast via a gadget, which records the time and programme that a viewer views on a given day.
Read About: What is Digital Payment?

In target rating points, the gross rated points achieved by an advertisement or campaign among targeted people within a wider population are measured.

The TRP value is the sum of each individual GRP, multiplied by the anticipated target audience in the gross audiences if an advertisement appears more than once. The TRP and GRP measurements are both important factors in measuring an advertisement’s potential marketing reach. TRPs are calculated outside of television using the whole target audience as the denominator and the total impressions delivered to this audience multiplied by 100 as the numerator.

TRPs are frequently summed up by week and shown in a flowchart so that a marketer may understand how many impressions each media channel delivered to the target audience.

TRPs can alternatively be calculated using the formula 100 x reach x frequency, where reach is the proportion of the target audience that received at least one impression and frequency is the average number of impressions.
Read About: Accounting

TRP can be calculated through these methods:

What is a good TRP?

A TRP rating of 3 is regarded as good and sufficient.

How do television stations make money?

Advertising is the primary source of revenue for television stations.

What are the advantages of having a high TRP?

TRP of a channel enables businesses to target audiences based on their attractiveness and assess their return on investment. When there are shows with better ratings, it allows broadcasting firms to charge higher prices to advertising.

What is Netflix’s revenue model?

Netflix’s primary source of revenue today comes from its large subscription base, which ranges from $8.99 to $15.99 per month.

Is Hulu a better alternative than Netflix?

Netflix is your best bet if you’re seeking for a streaming service that will provide you with a lot of enjoyment hours. Netflix is particularly ideal for families because it allows you to stream on up to four devices, whereas Hulu only allows you to stream on two. However, if you go for the Hulu, ESPN+, and Disney+ bundle, Hulu might be a terrific option for families.