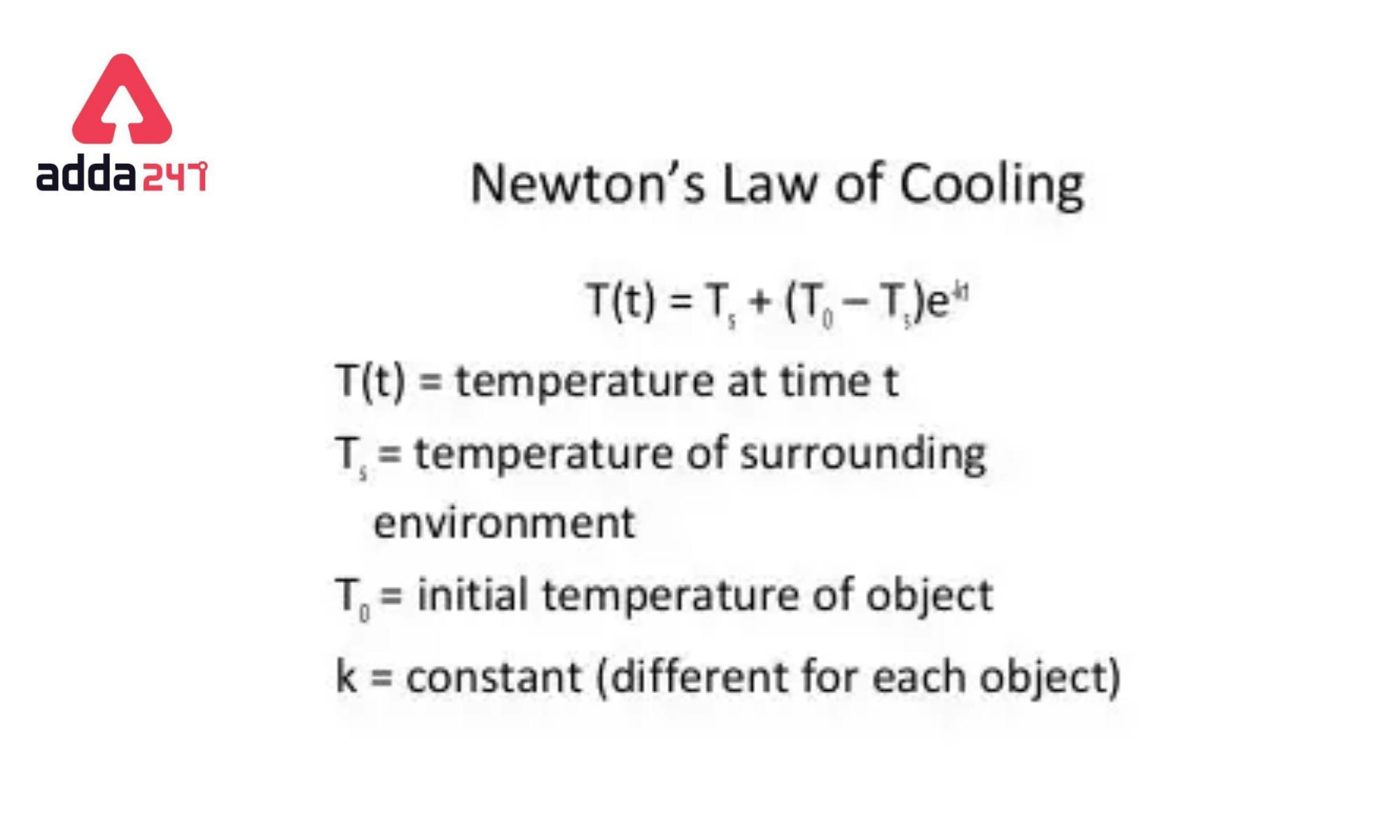 The rate of heat loss of a body is directly proportional to the difference in temperatures between the body and its surroundings, according to Newton’s law of cooling. The law is typically qualified by the requirement that the temperature difference be modest and that the nature of the heat transfer mechanism remain unchanged. As a result, it’s the same as saying the heat transfer coefficient, which mediates heat losses and temperature changes, is constant.

Because the thermal conductivity of most materials is only slightly dependent on temperature, this requirement is generally met in heat conduction (where it is guaranteed by Fourier’s law). For forced air or pumped fluid cooling, when the fluid characteristics do not vary significantly with temperature, Newton’s Law is obeyed, but it is only essentially true for buoyancy-driven convection, where the velocity of the flow increases with temperature difference. Finally, Newton’s law of cooling only applies to very tiny temperature changes in the case of heat transfer by thermal radiation.

The heat transfer literature’s version of Newton’s law expresses the idea that a body’s rate of heat loss is proportional to the temperature differential between the body and its surroundings. The statement for a temperature-independent heat transfer coefficient is:

The heat transfer coefficient h depends upon physical properties of the fluid and the physical situation in which convection occurs. Therefore, a single usable heat transfer coefficient (one that does not vary significantly across the temperature-difference ranges covered during cooling and heating) must be derived or found experimentally for every system that is to be analyzed.

When the internal thermal resistance within the object is small in comparison to the resistance to heat transfer away from the object’s surface (by external conduction or convection), which is the condition for which the Biot number is less than about 0.1, simple solutions for transient cooling of an object can be obtained. This condition allows for the assumption of a single, somewhat constant body temperature that varies with time but not with place. (Otherwise, the body would be at a variety of temperatures at any given time.) As time passes, the temperature of this single object will fluctuate exponentially (see below).

The so-called lumped capacitance model is created when the Biot number is low. The internal energy (the quantity of thermal energy in the body) is computed using this model, which assumes a constant heat capacity. In that instance, the body’s internal energy is a linear function of the single internal temperature of the body.

According to Newton’s law of cooling, weknow that

By Application of Integration on both sides, we get

Following are the limitations of the Newton’s Law of Cooling:

What is Newton’s law of cooling?

The pace at which an object cools is proportional to the temperature difference between the object and its surroundings, according to Newton’s law of cooling. Simply explained, in a cold room, a glass of hot water will cool down faster than in a hot room.

What is Newton law of cooling and warming?

The temperature of a body varies at a rate proportional to the difference in temperature between the body and its surroundings, according to Newton’s law of cooling (or heating).

What is Newton’s Law of Cooling how does it differ from Stefan’s law?

Stefan’s law can be used to calculate the temperature of a black body radiating heat. Only when the temperature differential between the body and the surrounding is modest and cooling happens due to response can Newton’s law be employed. There should also be no heat loss owing to conduction.

What is a cooling curve in chemistry?

What is meant by a black body?

A blackbody is a physics term for a surface that absorbs all radiant radiation falling on it. The word comes from the fact that incident visible light is absorbed rather than reflected, making the surface appear black.