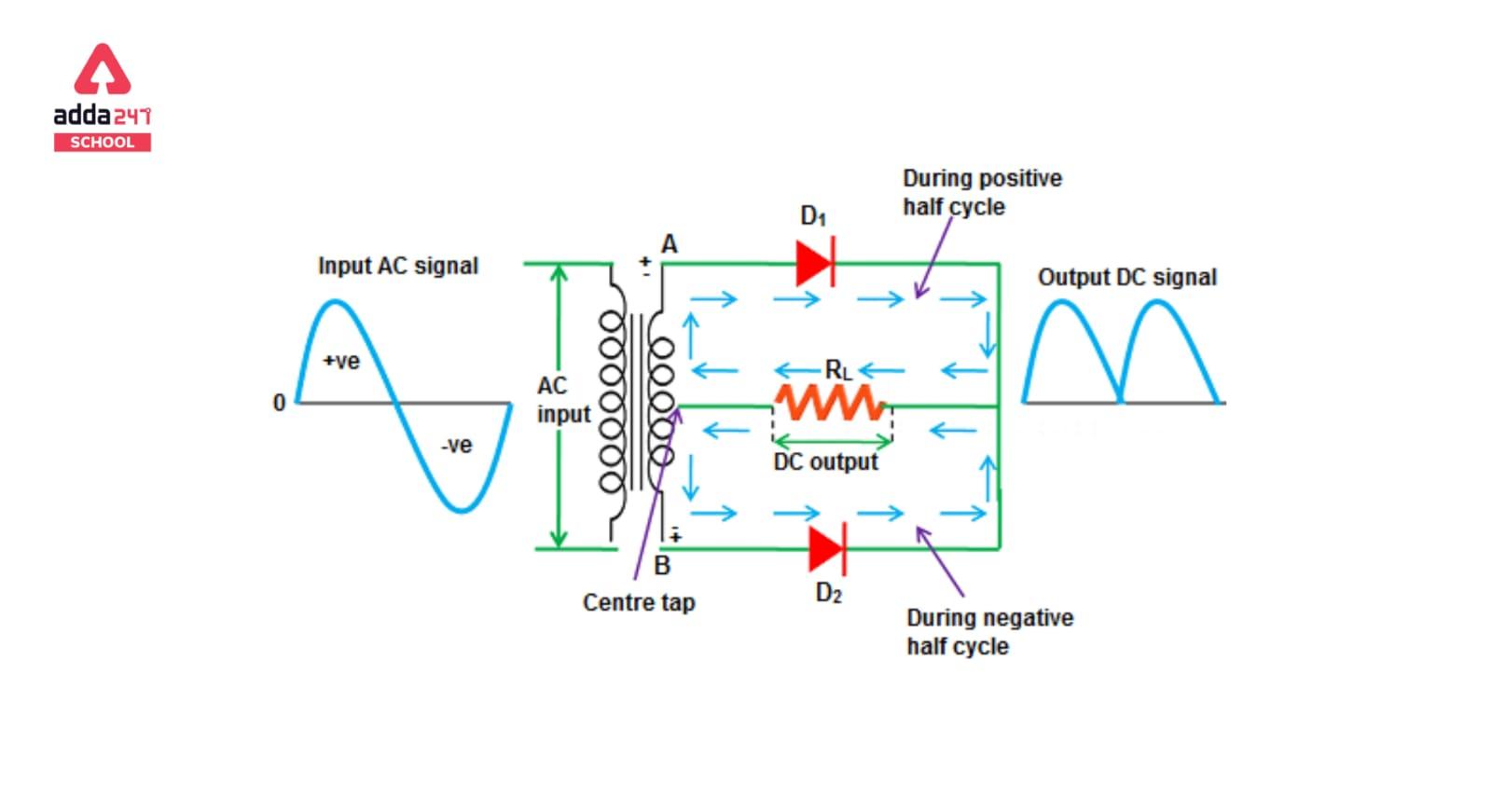 A full-wave rectifier converts both halves of each cycle of an alternating wave (AC signal) into a pulsing DC signal. To convert AC voltage to DC voltage, full-wave rectifiers are utilised, which require numerous diodes to build. The technique of converting an AC signal to a DC signal is known as full wave rectification.

Two diodes are now utilised in a Full Wave Rectifier circuit, one for each half of the cycle. The secondary winding of a multiple winding transformer is split evenly into two halves with a common centre tapped connection (C).

When the anode terminal of each diode is positive with respect to the transformer centre point C, each diode conducts in turn, producing an output throughout both half-cycles, double that of the half-wave rectifier, making it 100 percent efficient.

Because the intervals between each half-wave created by each diode are now filled in by the second diode, the average DC output voltage across the load resistor is now double that of the single half-wave rectifier circuit and is approximately 0.637Vmax of the peak voltage, assuming no losses.

VRMS = 0.7071VMAX, where VMAX is the maximum peak value in one half of the secondary winding and VRMS is the rms value. IDC = VDC/R is the formula for DC current.

If each half of the transformer windings has the same rms voltage value, the output waveform’s peak voltage is the same as before for the half-wave rectifier. Different transformer ratios can be utilised to get different DC voltage outputs.

Diodes D3 and D4 conduct in series during the negative half cycle of the supply, but diodes D1 and D2 switch “OFF” since they are now reverse biassed. The load’s current is flowing in the same direction as before.

The key benefit of this bridge circuit is that it does not require a specific centre tapped transformer, which reduces the size and expense of the circuit. The load is connected to one side of the diode bridge network, while the single secondary winding is connected to the other. The other advantages of a full wave rectifier are:

The disadvantages of a full wave rectifier are as follows:

Ques. What is the working principle of full wave rectifier?

Ans. Only a half cycle of an AC waveform is used by the half-wave rectifier. A full-wave rectifier has two diodes and uses both halves of the AC signal to produce its output. During the time when one diode is blocking current flow, the other diode is conducting and allowing current to flow.

Ques. What is the conclusion of full wave rectifier experiment?

Ques. What is ripple and ripple factor?

Ans. The residual periodic change of the DC voltage within a power supply obtained from an alternating current (AC) source is known as ripple (particularly ripple voltage) in electronics. After rectification, the alternating waveform is not completely suppressed, resulting in this ripple.

With increasing firing angle, the ripple factor, which is defined as the ratio of the rms value of the ac component to the dc component, rises.

Ans. The peak inverse voltage across each diode in a center-tapped rectifier is twice the maximum voltage over half of the secondary winding. Bridge rectifiers have a higher transformer utilisation factor than centre tapped full wave rectifiers, making them more advantageous.

Ques. What is the difference between half wave and full wave rectifier?

Ans. The transformation of a half wave rectifier employs only half of the AC cycle. The negative half of the input is blocked when the positive half is passed, and vice versa. A full wave rectifier is an electrical circuit that converts an entire cycle of alternating current into pulsating DC.