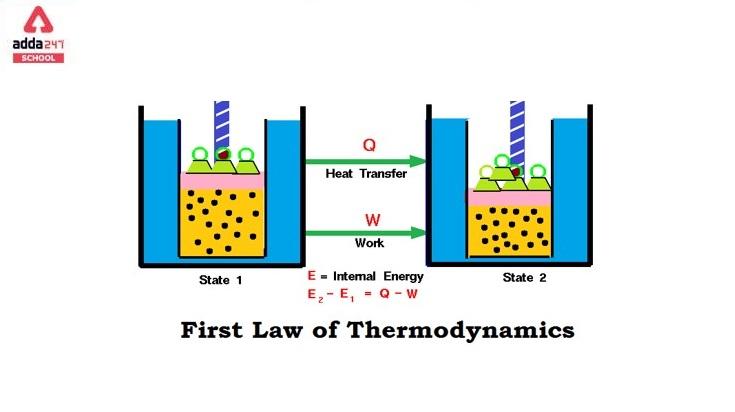 The first law of thermodynamics is a big thinker. The first law of thermodynamics declares that the total amount of energy does not change. In other words, energy cannot be generated or destroyed, according to the First Law of Thermodynamics. It can only be transferred from one form to another. This concept may appear abstract at first, but if we look at examples, we’ll notice that energy transfers and transformations occur all the time around us. For instance:

ΔU = It depicts the change in Internal energy

ΔQ = It depicts Heat given to the system

ΔW = It depicts Work done by the system.

Hence, the heat given to the system is:

The first law of thermodynamics describes how the heat supplied to a system is connected to its internal energy and work done. The majority of useful inventions, such as heat engines, refrigerators, and air conditioners, are founded on this law.

Steam Engine: To understand the first law of thermodynamics, consider a steam engine. The mechanism of the steam engine is to convert heat energy into mechanical energy. The water is heated, which produces steam, which creates pressure to drive the piston within a cylinder, which propels the engine. As a result, when one type of energy disappears, an equal amount of another type of energy arises. It is impossible to construct a machine that can be run without energy.

It refers to a region of the physical cosmos with a specified limit that is being observed. This system can undergo internal modifications and exchange energy or mass with its surroundings. The system’s boundary divides it from its surroundings.

In an open system, both mass and energy are transferred between the system and its surroundings. It denotes the possibility of energy or mass leaving or entering the system. A swimming pool, for example, is an open system since water can enter and exit it.

Only energy is transferred in a closed system; no mass is transferred. As an
example, consider a closed cylinder. It can be heated or cooled without losing bulk. However, if the cylinder is opened, the system behaves as if it were open.

First Law of Thermodynamics Deals with only

Isothermal process: During an isothermal operation, the temperature of an ideal gas remains constant. This signifies that the system’s heat is being used to conduct work against the environment. So,

Melting process: When a solid melts into a liquid, the internal energy of the solid increases.

Amount of heat that the system absorbs = dQ

It demonstrates that the heat delivered is equivalent to the increase in the system’s internal energy.

FAQs on First Law of  Thermodynamics

Q. What is the first law of thermodynamics?

According to the first law of thermodynamics, energy cannot be generated or destroyed. An isolated system’s energy remains constant.

Q.What is the significance of the first law of thermodynamics to the environment?

The sun is the sole source of energy for all living things on Earth. These energies are not returned to the solar system by plants but are instead passed on to herbivores that eat green vegetation. When herbivores die, some of their energy is absorbed by carnivores or passed on to decomposers.

Q. What is the enthalpy of production of an element’s most stable form in its standard state?

In its standard state, the enthalpy of production of an element’s most stable form is zero.

The change in enthalpy of a reaction, according to Hess’ law, remains constant whether the reaction is carried out in one step or several steps.