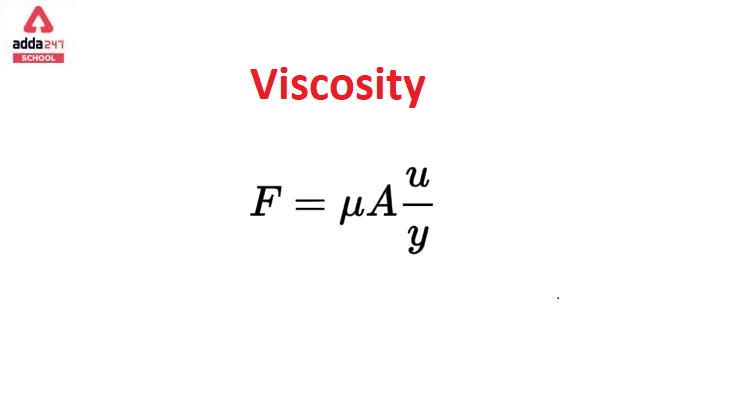 Most fluids have some resistance to motion, which we call viscosity, which occurs when the fluid’s layers move relative to one another. Viscosity is a measure of a fluid’s thickness or resistance to items passing through it. It is caused by internal friction between the fluid layers as they slip past one another while fluid moves.
When fluid has a high viscosity, it inhibits movement. Because of its strong intermolecular tensions, it has a lot of internal friction, which prevents layers from moving past one another. A fluid with low viscosity, on the other hand, flows smoothly because its molecular nature causes very little friction when moving. Gases have viscosity as well.

The viscosity meaning in chemistry

A fluid’s viscosity is a measure of its resistance to deformation at a certain rate, and it correlates to the colloquial concept of “thickness” in liquids.
When a viscous fluid is driven into a tube, it flows more swiftly near the tube’s axis than at its walls, and viscosity measures the internal frictional force between adjacent layers of fluid in relative motion. Experiments reveal that some stress is required to maintain the flow, which is due to the necessity for a force to overcome the friction between the fluid layers in relative motion.
The viscosity of a fluid is determined by its condition. The temperature, pressure, and rate of deformation of fluid can all affect its state. However, in some situations, the dependency on these parameters is minor, and in superfluids, zero viscosity is only found at very low temperatures. Furthermore, the second law of thermodynamics states that all fluids must have positive viscosity, and fluid with zero viscosity is referred to as ideal or inviscid.

The newton-second per square metre is the SI unit for dynamic viscosity. The comparable terms pascal-second and kilogramme per metre per second are also commonly used. The poise is the CGS unit. It was named after Jean Léonard Marie Poiseuille and is usually referred to as centipoise by ASTM standards.
The square metre per second is the SI unit for kinematic viscosity. The stokes is the CGS unit for kinematic viscosity. It is named for Sir George Gabriel Stokes and is sometimes used as a singular form in the United States.
The British Gravitational (BG) and English Engineering (EE) units are the most commonly used system or Imperial units. Dynamic viscosity is measured in pound-seconds per square foot in the BG system. The pound-force-seconds per square foot and the pound are the units of force and mass in the EE system, while the units of force and mass are established separately by the Second Law using the proportionality constant gc. In the BG system, a pound is a basic unit from which Newton’s Second Law defines the unit of mass.
Fluidity is the reciprocal of viscosity and is rarely utilised in engineering practice.

Viscosity (represented by the symbol (η “eta”) is the ratio of the shearing stress (F/A) to the velocity gradient (∆vx/∆z or dvx/dz) in a fluid or liquids.

Liquid viscosity data are important in many engineering applications in the petroleum refining and petrochemical industries. It can be applied in fluid mixing: fluid flow, heat- and momentum-transfer operations. The viscosities of liquids are larger than those of gases at the same temperature. The correlation for liquid viscosity as a function of temperature is given by

A, B, C, and D = regression coefficients for a chemical compound

The viscosity of a fluid is a measurement of its resistance to flow. There are two methods for determining the viscosity of a fluid.
One method is to measure the fluid’s resistance to flow when a force is applied to it. Dynamic Viscosity is the term for this. The other method is to measure the fluid’s resistive flow under gravity’s weight. Kinematic viscosity is the name given to this measure of fluid viscosity.
Many people misunderstand the two viscosity measurements and believe they are one and the same. In actuality, they are rather different from one another. Kinematic viscosity is more beneficial than absolute or dynamic viscosity in a few instances.

What causes viscosity in the first place?

What are the different kinds of viscosity?

Kinematic and dynamic viscosity are the two types of viscosity that are typically reported.

Is there viscosity in the air?

Yes, and air viscosity is largely determined by temperature.

What is the best way to break viscosity?

Is it true that water has a high viscosity?

No, because viscosity is a measure of fluid friction that describes a fluid’s internal resistance to flow. As a result, water is “thin,” with a low viscosity.