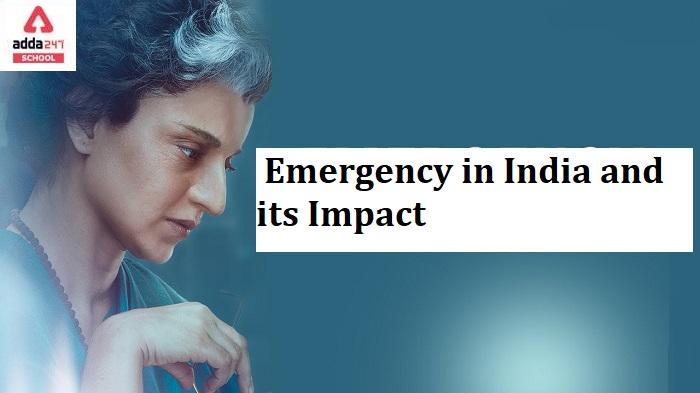 Emergency in India- what is an Emergency In a Country?

In India, a state of emergency is a period of rule that can be declared by the President of India in a situation of crisis. The President can overrule the various articles of the Constitution, which guarantee Fundamental Rights to the people of India, with the recommendation of the cabinet of ministers. Part XVIII of the Indian Constitution, from Articles 352 to 360, contains emergency measures. These laws enable the Central Government to efficiently respond to exceptional circumstances. The rationale for incorporation is to protect the country’s security, sovereignty, integrity, and unity as well as the Constitution and the democratic political system. In this article, we have provided details about emergency India and its impact.

Emergency in India- Types of Emergency

There are three types of Emergency provisions in India:

Raj Narain, who was defeated by Indira Gandhi in the 1971 parliamentary election, filed petitions in the Allahabad High Court accusing her of electoral fraud and using state machinery for her political interest. Shanti Bhushan argued the lawsuit on Narain’s behalf. Indira Gandhi was also cross-examined before the High Court.

On 12 June 1975, Justice Jagmohanlal Sinha of the Allahabad High Court convicted the prime minister of misusing government machinery for her election campaign. The court ruled her election null and void and removed her from her Lok Sabha seat. The court also barred her from running in any election for another six years. Serious allegations like buying voters and electoral fraud were dismissed, and the former Prime Minister was held accountable for misusing government machinery.

Indira Gandhi appealed the ruling of the High Court to the Supreme Court. On 24th June 1975, Justice V. R. Krishna Iyer affirmed the High Court decision and ordered that all advantages Gandhi earned as an MP be revoked, as well as her right to vote. She was, however, permitted to continue as Prime Minister until the outcome of her appeal.

Later, on the night of 25th June 1975, just minutes before midnight, President Fakhruddin Ali Ahmed announced a state of internal emergency on the advice of the prime minister. Indira Gandhi awarded herself exceptional powers by invoking Article 352 of the Indian Constitution. That’s how in odd circumstances the emergency has been imposed on India for the first time to save the political interest of the prime minister.

Indira Gandhi declared a new election and freed all political prisoners on 18th January 1977, while the Emergency formally ended on March 23, 1977. Indira Gandhi and Sanjay Gandhi both lost their seats in the March 1977 Lok Sabha elections. Congress was reduced to 153 seats, 92 of which came from four southern states. The Janata Party had a strong majority with 298 seats and 47 seats from its allies (out of a total of 542). Morarji Desai became India’s first non-Congress Prime Minister.

Impact of National Emergency in India

Q. What happens during an emergency in India?

During the emergency in India, fundamental rights were suspended and state powers invested in the central government.

Q. What is the emergency in the country?

In India, a state of emergency is a period of rule that can be declared by the President of India in a situation of crisis. The President can overrule the various articles of the Constitution, which guarantee Fundamental Rights to the people of India, with the recommendation of the cabinet of ministers.

Q. What is an emergency and what types of emergency?

The Indian Constitution grants the President the ability to declare three categories of emergencies: national, state, and financial.