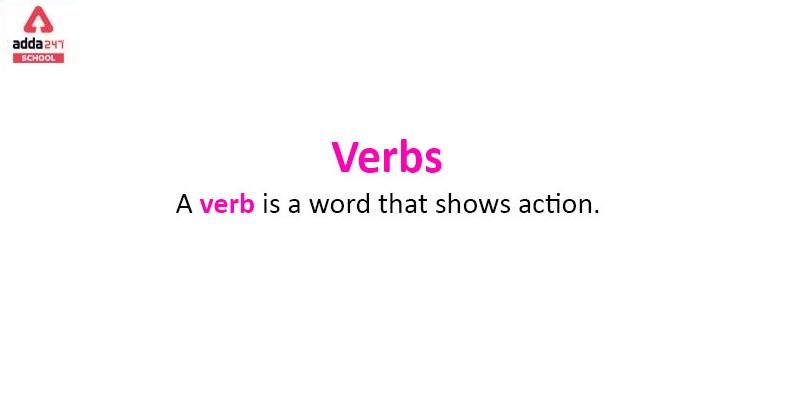 We cannot conceive a sentence without a verb, just as we cannot envision life without water. In English grammar, the verb is a crucial part of every phrase. A verb is a word group that describes an activity that the subject has carried out. play, read, feel, and Know are examples of verbs. In a simple way, it can say that Verb represents a course of action or the occurrence of an action. Here we going to discuss Verb definition, different types of verbs, their usage, and examples.

The verb is the most important word in a sentence.  The verb is a must for a sentence. Even alone it can make a sentence – A one-word sentence. Example – [ Go. , Fire! ]. A verb denotes doing i.e an action or state of being or having something.  According to the Cambridge Dictionary, a ‘verb’ is defined as “a word or phrase that describes an action, condition, or experience”
We can use the verb in a sentence in two ways –
1) to express an action or an event:
For example-
1) The children play in the park. Here ‘play’ describes what the children are doing in the park.
2) He is looking at the picture.  Here ‘looking’ is the verb.

2) to express a state (of being or having something)
For example –
1) We have a TV
2) The children are all happy.

Here’s a list of some commonly used action verbs and state verbs.

The verb is an essential part of speech in English grammar. As we know verb is used to define an action done by a subject or event or state. Primarily we can classify verbs into two categories-

The main verb plays an important key role in a sentence to express an action performed by the subject or ‘doer’. We can’t form a sentence without the main verb. Some examples of main verbs are – Study, Read, Learn, Play, Eat, Go, etc.  Let’s understand with examples,
I am studying in Class 10. In this sentence ‘ Studying ‘ is the main verb which describes the action of the subject.

The categories of auxiliary verbs known as modal verbs or auxiliaries are employed to convey the speaker’s attitude or mood. To indicate several forms of phrase modes, such as a request, recommendation, ability, counsel, permission, duty, necessity, prayer or wish, promise, etc.,

The verb form is a way to express context that describes the specific time of the action performed by the individual. As we know Verb is the fundamental unit of sentence formation.  While the formation of sentences of different times, we need different forms of verbs. There are a total of five forms of verbs. These are -the root verb or basic form of the verb, third person singular present form of the verb, present participle or ‘ing’ form, and simple past and past participle.

Here we provide a list of present, past, and past participle forms of some important verbs, which helps students to memorize these verb forms very easily.

Let’s understand with some examples of verb forms.

As we learn before, to express the time of an action we use various forms of verbs in sentence formation. A regular verb can be expressed to indicate whether an activity occurred in the past or is now occurring.
The majority of the time, regular verbs’ are the past forms of root verbs that are created by adding an “ed” to the underlying verb. In the case of regular verbs, Past form and past participle form are always the same. But On the other hand,  Irregular verbs do not adhere to these norms.  They’re referred to as irregular verbs. These verbs each have a different form.

Q. What do you mean by Verb?

A verb denotes doing i.e an action or state of being or having something. The Oxford Learners’ Dictionary defines a ‘verb’ as “a word or group of words that express an action (such as eat), an event or a state”. According to the Cambridge Dictionary, a ‘verb’ is defined as “a word or phrase that describes an action, condition, or experience”

Q.What is a phrasal verb?

some examples of phrasal verbs are run over, give up, break up, break down, call up, Keep away from, etc.

Q.what are the 3 forms of verbs?

The main 3 forms of verbs are -the base form, the past form, and the past participle form.