Skip to content
Online Tution   »   Important Question   »   What is Scientific Name of Pig? 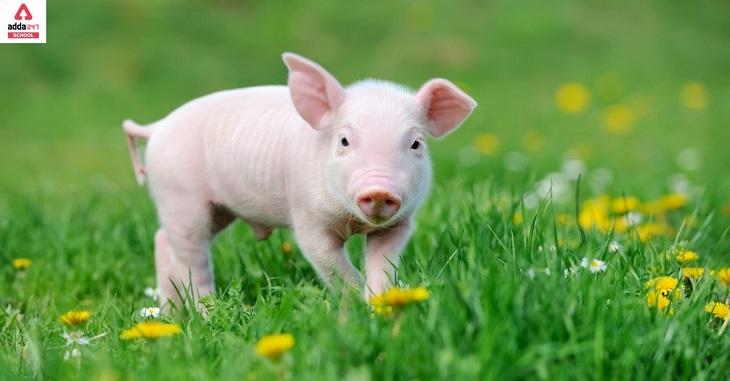 The scientific name of the pig is ‘SUS’.Pigs, like wild boars and hogs, are members of the Suidae family. As a result, suids are members of this group. Pigs are even-toed ungulates, which puts them in the Artiodactyla order, which also includes giraffes, American bison, and even the killer whale. With about 677 million individuals, the domestic pig (Sus domesticus) is one of the most well-known members of the Suidae family (as of January 2020). Wild boars are the ancestors of domestic pigs and are found throughout Europe and Asia. Pigs have also been introduced to other continents, including North and South America, and Australia.

Pigs are omnivores, though they are mostly fed soybean and cornmeal, as well as a variety of minerals and vitamins. Pigs are primarily bred for their meat and leather in most nations. Their fur can also be utilised to produce brushes. Pigs also have a superior sense of smell, with some researchers stating that it is nearly 2000 times more sensitive than a human’s. As a result, pigs are frequently utilised to locate truffles, which are highly prized in European countries.

Read: 7 continents of the world

Domestic pigs that escaped from farms or were left to feed in the wild, as well as wild boars brought as hunting prey, have resulted in significant populations of feral pigs in North and South America, Australia, New Zealand, Hawaii, and other regions where pigs aren’t native. Feral pigs are listed as one of the world’s 100 worst invasive species by the Invasive Species Specialist Group.

Read: Air is Mixture or Compound?

Feral pigs: like other introduced mammals, have a significant role in extinction and environmental change. They’ve been introduced to many regions of the world, and they’re wreaking havoc on crops and household gardens while also spreading illness. They uproot vast swaths of land, destroying natural vegetation and spreading weeds in the process. As a result, habitats are altered, plant succession and composition change, and native species dependent on the original habitat decline.

A pig is a member of the Suidae family and belongs to the genus Sus. Pigs, which are recognized to be the ancestor of all pigs, from domestic to wild, are known to be the ancestor of all pigs. These species are known to be omnivores, and their feeding range is similar to that of humans. In fact, there are so many similarities between pigs and people that pigs are sometimes utilized in human medical studies.

Scientific Name of a Pig: Breeds

Medications: Pigs are said to have a significant part in medicine, as their skins contain crucial minerals. It’s because they share a variety of physiological and anatomical similarities with humans. The organ system of a pig has been proven to be 80-90 percent equivalent to that of a person. They are true omnivores, just like humans. They’re a natural fit for giving items like pills, injectable capsules, and lotions to produce medicines because they’re so comparable.

Leather: This is maybe the most widely produced pig-made item. The leather can be distinguished by several clustered hair pore holes. Pig suede is the most commonly utilised form of leather in the apparel industry for making leather coats and jackets. Peccary, on the other hand, is the most popular leather made from the hides of wild South American Neifer pigs and is commonly used.

Strings for the violin: Everyone enjoys music, and you may be a violin enthusiast. You might be startled to learn that there’s a good possibility you’ll come upon pig items right there. The threads are frequently constructed of catgut, which is formed from the walls of various animals’ intestines, particularly those of pigs. Pigs are used for violin strings because they can endure harsh situations in their intestines and are hence appropriate for long-term use.

Brushes: The bristly hair of boars(male pigs), has been utilized in the creation of hair and toothbrushes for over a few hundred years. These products are beneficial to the human scalp, and boar hair is nearly identical to human hair in terms of texture. Its use promotes healthy hair growth, gives gloss to the hair, develops softer yet stronger hair with less breakage, and influences the hair by evenly dispersing scalp oils. Given these advantages, it’s no surprise that they’re in high demand.

Explosives: Oils, particularly glycerin from pigs, are employed in the development of explosives and dynamites. Until now, the gelatin found in pig bones has been found to aid in the movement of gunpowder into a gun’s bullet. The conversion of pig fat, such as glycerin, into an explosive, is carried out when the material is combined with nitric acid via the nickel catalyst that produces nitroglycerin. This reaction was initially carried out by the late Alfred Nobel, a Swedish scientist, and chemist. As a result, dynamite swiftly rose to the top of the priority list for the mining and engineering industries.

Q. What is the scientific name of the pig?

The scientific name of the pig is ‘SUS’.

Q. What are the uses of pigs?

Q. What are the species of pigs?

Q.What are the breeds of pigs?

What is the scientific name of pig?

The scientific name of the pig is ‘SUS’.

What are the uses of pigs?

What are the species of pigs?

What are the breeds of pigs?