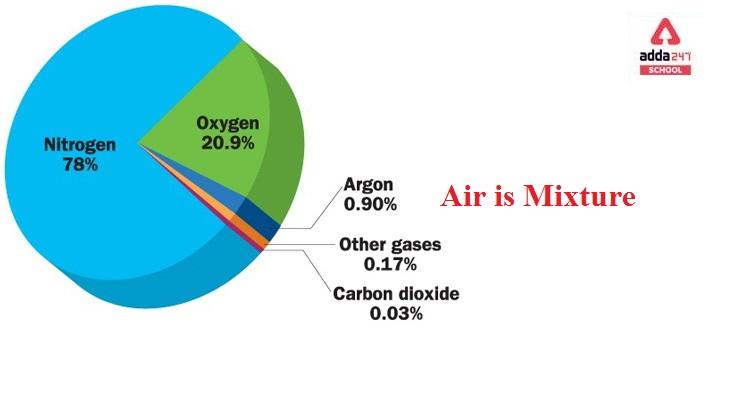 Read About: Father of Geography

Air is a mixture of gases

Nitrogen (N2) makes up 78 per cent of the gases, Oxygen (O2) makes up 20%, Noble gases make up 1%, Carbon dioxide (CO2) makes up 0.03 per cent, and water vapour (H2O) makes up 0.97 per cent.
The amount of water in the atmosphere varies greatly. Other elements are present in smaller concentrations when there is a lot of water in the air. The amount of water in the air can increase by as much as 4%. 0.5 per cent of the water in the atmosphere is the smallest amount. Water brings the gases closer together, allowing them to take up adequate space.
When the amount of water in the atmosphere is extremely low, the air is usually very ‘dry.’ A volume of dry air of 22,4 dm3 weighs 28,96 grammes. The presence of considerable amounts of water in the air is referred to as humidity.
Other elements can also be present in the air. However, the percentages of these elements are quite low. Aerosols are particles that can be seen in the air. These are just dust particles blown off the surface of the Earth by the wind or produced during volcanic activity. During the burning process, ashes and dirt particles are expelled into the air.
As one rises in height, the composition of the air changes as well. Oxygen molecules disintegrate over 90 kilometres above the Earth’s surface, leaving only oxygen atoms. Over a hundred kilometres above the Earth’s surface, nitrogen molecules disintegrate. The air has a different composition at this altitude than it does at ground level.

Read About: Father of Physics

Air is a Mixture

A mixture is a material made up of two or more separate chemical compounds that are not chemically mixed and are combined in the form of solutions, suspensions, and colloids.
Chemical compounds are mechanically blended or mixed to produce mixtures. Chemical bonding or other chemical changes are not present in such substances, which include elements and compounds. Despite the fact that the constituents do not undergo any chemical changes, the physical qualities of a mixture may differ from those of the components. Physical means can be used to separate some mixtures into their elements.

Air is a mixture of various gases

Every chemical element can be found in a variety of states (phases). One of these stages is the gaseous phase. In addition to being gaseous, a component can be solid or liquid. While water is solid, it is referred to as ice; when fluid, it is referred to as wet; and when gaseous, it is referred to as gas or steam.
When the temperature of a key component rises, the molecules expand, making the substance gaseous and less visible. As a result of this stage shift, air becomes invisible.
When the temperature drops, air molecules clump together more effectively, causing a substance to solidify. The temperature at which each phase shift occurs differs depending on the substance.
Air may be found all throughout the world. It can even be found in the soil at the Earth’s surface layer. Air is found on the Earth’s surface and in the atmosphere, which is a layer of air. The atmosphere can be divided into several layers based on temperature and height. Straight borders don’t do a good job of distinguishing these lines because they frequently overlap.

FAQs on Is air is a mixture

Is air a combination, a compound, or an element in any way?

Air is a mixture, it is not a compound, and its constituents can be separated.

What makes air a gaseous mixture that is homogeneous?

Air is a homogeneous mixture of gases such as nitrogen, oxygen, carbon dioxide, argon, and numerous other gases in smaller proportions in its pure form. When it gets contaminated, however, and extra dangerous substances are added to it, it becomes heterogeneous.

What is the nature of air as a mixture?

The air we breathe is a homogenous mixture.

Is air considered a solution?

Air is a solution/mixture of several gases.

Is there a difference between clear air and mixed air?