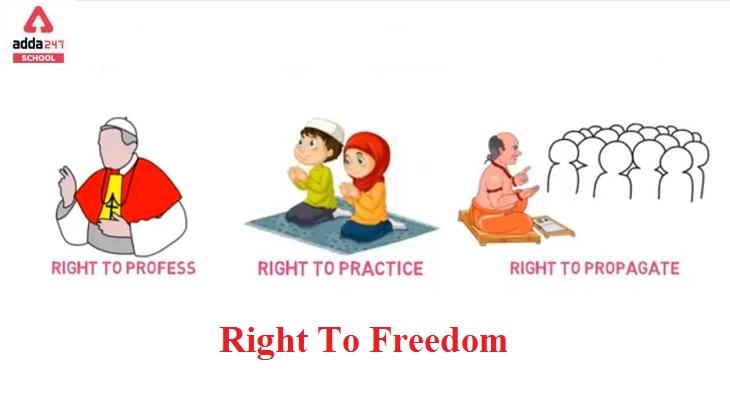 Right To Freedom in India

Right To Freedom is explained in Articles 19 to 22 of the Constitution covers the right to freedom, with the goal of ensuring individual rights that the framers of the Constitution deemed important, and these Articles also include specific constraints that the state may put on human liberty under certain conditions. Article 19 protects six democratic rights that are uniquely available to Indian citizens. Freedom of speech and expression, freedom of assembly without arms, freedom of association, freedom of movement throughout our country’s territory, freedom to dwell and settle in any area of India, and freedom to practise any profession are among them.

All of these liberties are subject to reasonable constraints imposed by the state, which are specified in Article 19 itself. National security, public order, decency and morality, contempt of court, incitement to offences, and defamation are among the reasons for imposing these limits, which vary depending on the right sought to be curtailed. The state also has the authority to nationalise any trade, industry, or service in the public good, to the exclusion of residents.
Read About Ports in India

Right to Freedom of Speech and Expression

Freedom of speech is a principle that protects an individual’s or a group’s right to express their thoughts and beliefs without fear of retaliation, censorship, or legal consequences. The Universal Declaration of Human Rights and international human rights law both recognize the right to freedom of expression as a human right. Free speech is protected by constitutional legislation in several countries. In political debate, terms like free speech, freedom of speech, and freedom of expression are used interchangeably. In a legal sense, however, freedom of expression refers to any activity that involves seeking, receiving, and transmitting information or ideas, independent of the media utilised.

Right to Freedom of Assembly

Right to Freedom of Religion Association

The right of an individual to join or quit groups voluntarily, the right of a group to take collective action to further the interests of its members, and the right of an association to accept or deny membership based on specified conditions all fall under the umbrella of freedom of association. It is defined as a person’s right to join with other people to jointly express, promote, seek, and/or defend common interests.

All modern and democratic legal systems recognize right to freedom religion of association as both an individual and a communal right.

Right to Freedom of Movement

Freedom of movement, often known as mobility rights or the freedom to travel, is a human rights concept that encompasses the right of persons to travel from one location to another within a country’s territory, as well as the right to leave and return to that country. The right encompasses not only visiting places, but also relocating one’s residence or place of employment.

FAQs on Right to Freedom

Name the 6 right to freedom.

Freedom of Speech and Expression, Freedom of Assembly, Freedom to form associations, Freedom of Movement, Freedom to reside and to settle, and Freedom of profession, occupation, trade, or business, are the six rights to freedom.

What is the Article 19 of the Indian Constitution?

Article 19 of the constitution guarantees freedom of expression, which is defined as the right to freely express oneself without fear of retaliation through oral, written, electronic, broadcasting, or the press.

What is the significance of having freedom?

Freedom is a state in which people are free to speak, act, and pursue happiness without being bound by external constraints. Freedom is crucial because it leads to improved creativity and creative thought, as well as better productivity and a higher overall quality of life.

What is religion’s right?

Why is religious liberty so important?

Religious liberty keeps the cultural majority from using the state’s power to force their beliefs on others. This safeguards everyone, religious and non-religious alike, from the government becoming so strong that it can dictate what individuals should think and do. The most sacred right of an individual is his or her conscience.