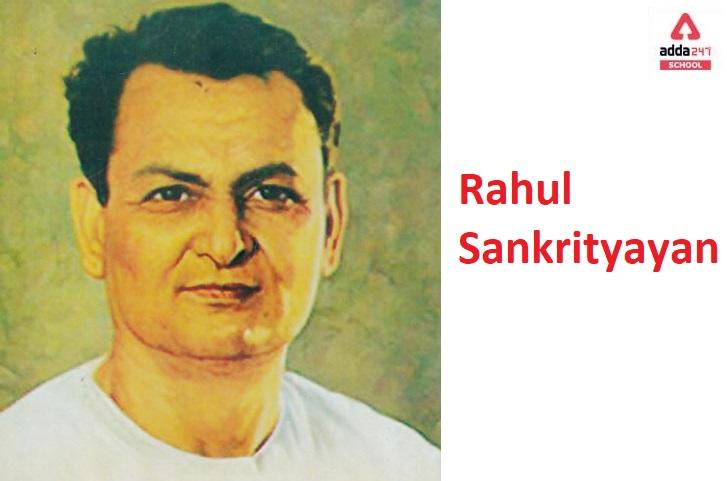 On April 9, 1893, Rahul Sankrityayan was born as Kedarnath Pandey. Rahul Sankrityayan was a polyglot who wrote in Hindi who was an Indian independence activist, writer, and polyglot. Rahul Sankrityayan was instrumental in transforming travelogue into a “literary form.” He was one of India’s most well-travelled scholars. Sankrityayan is known as India’s “founder of travelogue.”
He is well-known for his honest accounts of his travel adventures. In his travelogue Meri Laddakh Yatra, he deftly explores the region’s geographical, historical, and cultural characteristics. He became a Buddhist monk before becoming a Marxist socialist. Sankrityayan, was an Indian nationalist who was arrested and imprisoned for three years for his anti-British writings and lectures. He was a polyglot who was also a polymath. In 1963, the Indian government bestowed the Padma Bhushan upon him.

Sankrityayan was a polyglot, fluent in Hindi, Sanskrit, Pali, Bhojpuri, Magahi, Urdu, Persian, Arabic, Tamil, Kannada, Tibetan, Sinhalese, French, and Russian, among other languages and dialects. He was also a creative writer, an Indologist, and a Marxist theoretician. His works, which numbered in the hundreds, covered a wide range of topics, including sociology, history, philosophy, Buddhism, Tibetology, lexicography, grammar, textual editing, folklore, science, drama, and politics. Many of them had never been published before. From Prakrit to Hindi, he translated Majjhima Nikaya.
Volga Se Ganga, a work of historical fiction about the migration of Aryans, is one of his most well-known Hindi works. It was first released in 1942. Victor Kiernan’s translation of this text into English, From Volga to Ganga, was released in 1947. K. N. Muthiya translated it into Tamil as Valgavil Irundu Gangai Varai. Volga Ganga was the Kannada version, while Volga Nunchi Ganga Ku was the Telugu translation. The Malayalam adaptation was Volga Muthal Ganga Vare, and the Bengali version was Volga Theke Ganga.
In Bengali, more than ten of his books have been translated and published. In 1963, he was given the Padmabhushan, and in 1958, he was given the Sahitya Akademi Award for his book Madhya Asia Ka Itihaas.
In Sanskrit, he kept daily notebooks. Despite his extensive knowledge, he wrote in easy Hindi that everybody could understand. He wrote a wide range of works. He was well aware of the limits of Hindi literature, and he more than made up for it.
He travelled extensively and wrote in five other languages: Hindi, Sanskrit, Bhojpuri, Pli, and Tibetan.

Mahapandit Rahul Sankrityayan was born on April 9, 1893, in the Pandha district of Azamgarh, Uttar Pradesh, at his maternal grandmother’s house. Shri Govardhan Pandey, his father, was a Kanila native. Nana Ramsharan Pathak had only one child, Mother Kulwant. For a while, he went by the name Ramodar Swami.
Rahul married when he was extremely young and had no knowledge of his child-wife, Santoshi. According to his autobiography, Meri Jivan Yatra, he probably only saw her once in his 40s. He met a Mongolian scholar named Lola during his second visit to Soviet Russia, where he accepted an invitation to teach Buddhism at Leningrad University. She could communicate in French, English, and Russian, as well as write in Sanskrit. She assisted him in the creation of a Tibetan-Sanskrit dictionary. Their relationship resulted in their marriage and the birth of their son Igor Rahulovich. Due to restrictions enforced by the Stalin administration, Rahul’s mother and son were not permitted to join him to India after his job was completed.
He married Dr Kamala Sankrityayan, a 20th-century Indian Hindi and Nepali writer, editor, and researcher. Jaya Pathak was their daughter, and Jeta and Jayant were their sons.

Rahul Sankrityayan spoke how many languages?

So what was the father of the Indian travelogue?

The “father of Indian travelogue,” Rahul Sankrityayan, is commonly referred as as such.

What was the date of Rahul Sankrityayan’s death?

Who was the author of Volga to Ganga?

Volga to Ganga was written by Rahul Sankrityayan.

What is the location of the Volga River?

It is located in Russia.

Rahul Sankrityayan spoke how many languages?

So what was the father of the Indian travelogue?

The "father of Indian travelogue," Rahul Sankrityayan, is commonly referred as such.

What was the date of Rahul Sankrityayan's death?

Who was the author of Volga to Ganga?

Volga to Ganga was written by Rahul Sankrityayan.

What is the location of the Volga River?

It is located in Russia.