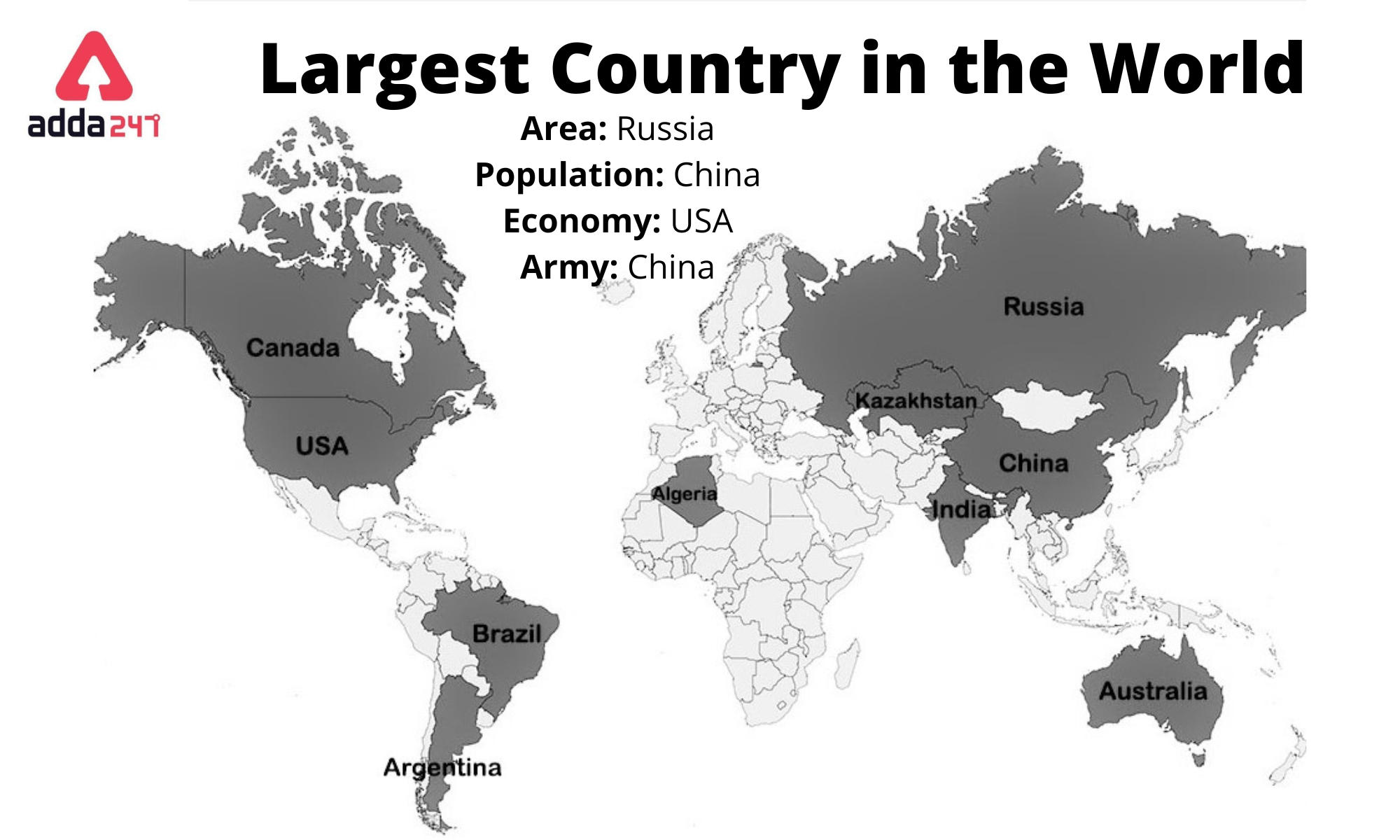 Russia is the world’s largest country, with a total land area of 17,098,242 km2 (6,601,665 mi2) and a land area of 16,376,870 km2 (6,323,142 mi2), accounting for 11% of the world’s total landmass of 148,940,000 km2 (57,510,000 square miles). Russia is the world’s largest country, spanning eleven time zones and bordering sixteen sovereign nations. With a population of 145.5 million people, it is the ninth most populous country in the world and the most populated country in Europe. Moscow, the nation’s capital and largest metropolis, is also Europe’s largest city. Saint Petersburg, Russia’s cultural capital and second-largest metropolis, is the country’s second-largest city. Novosibirsk, Yekaterinburg, Nizhny Novgorod, and Kazan are among the other significant cities.

In terms of geographical area, India is ranked seventh in the world. It covers 32,87,263 square kilometres. India stretches from latitudes 8o4’N to 37o6’N. It is an eastern country with a landmass that lies between longitudes 68o7’E and 97o25’E.

Largest Country in the world: By Population

China is the most Populated country in the world. The eastern side of the country is home to the majority of the inhabitants. Hong Kong, one of its dependents, would place approximately 100th in a list of countries.

China, with a land area of about 3.7 million square miles, is Asia’s largest country. Mountainous terrain covers the majority of the country. The Tien Shan, Kunlun chain, and Trans-Himalaya are its main mountain ranges. Tibet, which China captured in 1950, is located in the southwest. To the north is the Gobi Desert.

Position of India: By Population

Largest Country in the world: By Economy

Countries are ranked according to nominal GDP predictions from financial and statistical organisations, which are derived using market or official exchange rates. Nominal GDP does not account for differences in the cost of living between countries, and findings can fluctuate from year to year due to movements in currency exchange rates in any specific country.

In terms of nominal GDP, the United States has the world’s largest economy. The service sector of the economy, that contains finance, real estate, insurance, professional and business facilities, and healthcare, is the largest contributor to GDP in the United States.

Position of India: By Economy

Largest Country in the world: By Army

China had the world’s largest armed forces by active duty service personnel in 2022, with almost 2 million active soldiers. The People’s Liberation Army (PLA) is the Chinese Communist Party’s armed branch and the country’s primary military force (CCP). Ground Force, Navy, Air Force, Rocket Force, and Strategic Support Force are the five service branches that make up the PLA. The Central Military Commission (CMC), whose chairman serves as commander-in-chief, is in charge of it.

With over one million active military members, India, the United States, North Korea, and Russia rounded out the top five largest armies.

Position of India: By Army

Largest Country in the world: FAQs

Which country is No 1 in world?

In the 2021 Best Countries Report, Canada wins the top overall rank as the world’s number one country for the first time. After coming in second place in the 2020 report, Canada has now eclipsed Switzerland in the 2021 report, with Japan, Germany, Switzerland, and Australia following closely behind.

What is the most populated city in the world?