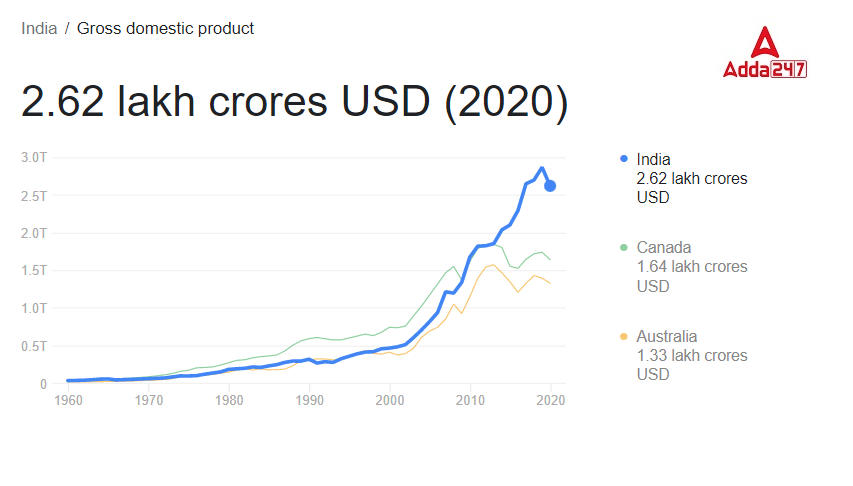 What is the GDP of India?

Even while GDP is frequently estimated on a yearly basis, it can also be calculated quarterly. For instance, the government of the United States produces an annualized GDP estimate for both the calendar year and each fiscal quarter. Each piece of data in this report is presented in real terms, which means that it has been adjusted for price changes and is therefore net of inflation.

Growth rates are the percentage changes in a given variable over a certain period of time. Growth rates are often calculated as the compounded yearly rate of growth of a company’s revenues, earnings, dividends, or even macro terms like gross domestic product (GDP) and retail sales for investors.

A growth rate that is negative indicates a decline in value. For instance, there were 11.9 million fewer manufacturing employment in the US in 2012 than there were in 2002, a -22.2% growth rate. A quantity’s growth rate over a single year is called an annual growth rate.

GDP annual percentage growth rate based on constant local currency pricing. Based on constant 2010 U.S. dollars, aggregates are calculated. GDP is calculated as the total gross value added by all producers who are residents of the economy, plus any applicable product taxes, minus any unaccounted-for subsidies. It is estimated without taking into account the deterioration and depletion of natural resources or the depreciation of manufactured assets.

Indian Economy: The Indian economy has grown, apart from the covid pandemic and the ongoing Russia-Ukraine conflict that led to global inflation. However, the road for the Indian Economy ahead will not be a rosy one for the government as the cloud of price rises is looming large. The economic growth of India slowed to the lowest in the financial year 2021-22 during the January to March period or the fourth quarter. This pulled down the gross domestic product (GDP) growth in the full fiscal 2021-22 to 8.7 percent, according to the data released by the National Statistical Office (NSO).

According to Rumki Majumdar, Economist, Deloitte India, the difference between the real and nominal GDP suggests that inflation has been a major issue, and the economy has been fighting the challenge of rising prices for a long time now, PTI reported.

“The government’s intervention in the form of duty cuts on imports, subsidies on fertilizers and cooking gas, duty cuts on fuels to protect consumers and businesses from high inflation is likely to impact the fiscal deficit in the coming quarters,” Majumdar said.

Garima Kapoor, an economist at Elara Capital, said a slowdown in global growth, elevated energy prices, a cycle of rising interest rates, and a tightening of financial conditions would all be key crosswinds.

She revised lower her annual economic growth forecast for the current fiscal year that started on April 1 to 7.5 percent from an earlier estimate of 7.8 percent, as per a Reuters report.

“With rising inflationary pressures, the consumption recovery remains under a cloud of uncertainty for 2022/23,” Sakshi Gupta, principal economist at HDFC Bank, was quoted as saying by Reuters.

The economy’s near-term prospects have darkened due to a spike in retail inflation, which hit an eight-year high of 7.8 percent in April. The surge in energy and commodity prices caused partly by the Ukraine crisis is also squeezing economic activity.

High inflation had led to the Reserve Bank raising the benchmark interest rate by 40 basis points in an unscheduled review. It is expected to take similar measures when the Monetary Policy Committee meets for the bimonthly review on June 8.

However, the Chief Economic Adviser ruled out the risk of stagflation in India as the country is better placed than other nations. Stagflationary risk to India is quite low compared to other countries, he said.

Stagflation is the phase when both inflation and unemployment rates are high with moderation in GDP growth.

Momentum in the service sector will be one of the key drivers apart from the government’s focus on enhancing public capital expenditure.

During quarter 4, private consumption expenditure grew by 7.9 percent, reflecting some impact of pent-up demand. There was also a revival in contact-intensive services in the last quarter which has helped the GDP print reach respectable levels.

Ans. Giving more details, the Minister stated that as per provisional estimates released by National Statistical Office (NSO), Indian economy in 2021-22 has fully recovered the pre-pandemic real GDP level of 2019-20. The real GDP growth in 2021-22 stands at 8.7 percent, 1.5 percent higher than the real GDP of 2019-20.

Q.3 Which year has highest GDP in India?

Ans. GDP in India averaged 699.64 USD Billion from 1960 until 2021, reaching an all-time high of 3173.40 USD Billion in 2021 and a record low of 37.03 USD Billion in 1960.
Q.4 What is considered a developed country?
Ans. A developed country—also called an industrialized country—has a mature and sophisticated economy, usually measured by gross domestic product (GDP) and/or average income per resident.
Q.5 Which country has the highest GDP in 2022?
Ans. United States: $20.89 trillion.