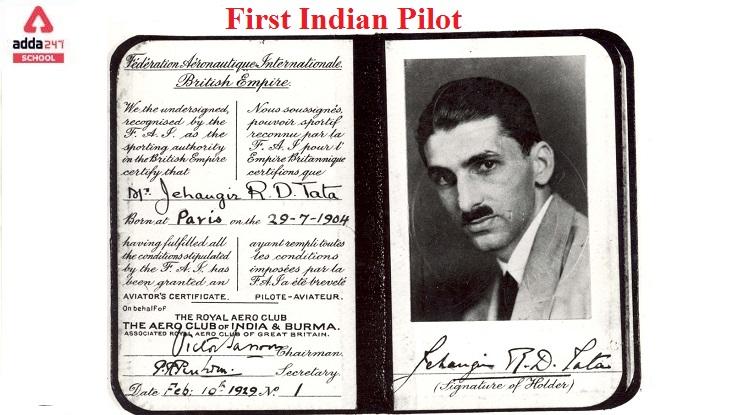 First Indian Pilot: FirstFlying high in the air is so exciting and why would not it be? However, we all know who invented the first aeroplane, of course, the wright brothers, Orville and Wilbur Wright, but do we know who were the first pilots? Especially of our own country?
Even if we do not, there is no need to worry! We are here to help you out.

The Wright Brothers were themselves the first pilots, as they tested their own air-plane. Orville Wright’s Wright Flyer made the first controlled, continuous flight in a powered aeroplane on December 17, 1903, covering 37 metres.
Now, we will get to know who was the first in India.

Read About: Longest River in the World

Bharat Ratna and industrialist J.R.D. Tata, known as the “Father of Indian Civil Aviation,” was the first person in India to acquire a commercial pilot certificate in 1929, with the number “1” printed on his licence. On behalf of the Federation Aeronautique Internationale, the Aero Club of India gave him a pilot’s licence on February 10, 1929. He was the founder of Tata Airlines and piloted the first commercial trip from Karachi to Bombay in a single-seater D.H. Puss Moth on October 15, 1932.
The pilot and entrepreneur was born on July 29, 1904, and three years later created India’s first airmail service, which ultimately became the country’s national airline, Air India. He was the son of prominent businessman Ratanji Dadabhoy Tata, and was born into the Tata dynasty of India. Suzanne Brière, his mother, was the first woman in India to drive an automobile. He became India’s first licenced pilot in 1929. He is also known for founding the Tata Group and Air India, as well as countless other businesses. In 1983, he was given the French Legion of Honour. Later in 1955, he was awarded the Padma Vibhushan and in 1992, the Bharat Ratna, India’s highest civilian honours. These awards were given to him in recognition of his contributions to the Indian industry.

Read About: Who is Father of Biology?

Mawya Sudan, from Jammu and Kashmir, has become the first woman to be a fighter pilot of the Indian Air Force (IAF) from the Rajouri district. Her village is Lamberi and belonging to the Border Tehsil of Nowshera in Rajouri She was appointed to the IAF as a Flying Officer.

Sarla Thukral was the first woman from India to fly a plane. She became an aviation pilot at the age of 21 after being born in 1914. She was the sole pilot of a Gypsy Moth. She persevered after receiving her pilot licence and logged 1,000 hours of flight time on the plane. The aeroplanes that the Lahore Flying Club had. P. D. Sharma, her husband, came from a family of nine pilots. He was a big supporter of hers. Sharma would have the first Indian to be granted an airmail pilot’s licence, and his wife, who earned more than 1,000 hours of flying, would become the first woman in India to obtain her “A” licence. Captain Sharma, on the other hand, unfortunately, died in a plane disaster in 1939. Sarla attempted to apply for her commercial pilot licence after some time, but World War II had broken out, and civil training had been halted. Sarla abandoned her intentions to become a commercial pilot and returned to Lahore to study at the Mayo School of Art, where she received a diploma in fine arts and was taught in the Bengal school of painting.
Thukral was a devout member of the Arya Samaj, a spiritual organisation dedicated to upholding the Vedic principles. Thakral had the option of remarriage within this group.
She came to Delhi with her two daughters after India’s partition, where she met and married R. P. Thakral in 1948. Sarla, sometimes known as Mati, rose to prominence as a successful businesswoman, painter, and fashion designer. In 2008, she passed away.

Read About: Sugar Bowl of the World

What is the name of India’s first female pilot?

Sarla Thukral was the first woman pilot in India.

Who was the first woman to fly a plane?

Who is India’s youngest pilot?

Maitri Patel, of Surat, has made history by becoming India’s youngest commercial pilot at the age of 19.

What is the minimum age requirement for obtaining a pilot’s licence?