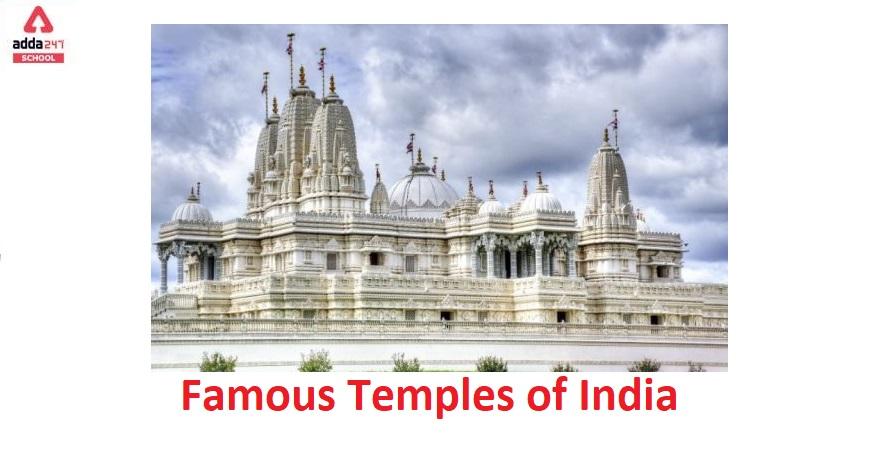 Famous Temples in India: In our Constitution of India, India is described as a SOVEREIGN SOCIALIST, SECULAR, DEMOCRATIC, REPUBLIC country. We live in the land of secularism where People from different religions and beliefs live in harmony and brotherhood.

According to the history of human civilization, India is one of the oldest civilizations in the world. India is a land of beliefs, Rich cultures, and also the birthplace of different religions and traditions. Such as Hinduism, Jainism, Buddhism and Sikhism. The oldest religion in the world, according to theory, is Hinduism. Hinduism, unlike other religions, has no creator and was created through the fusion of several traditions. According to numerous historical writings and academics, religion is a customary way of life with no clear beginning or end.

In Hinduism, There is a belief that the residence of the Almighty is in a “Mandir” or “Temple” Where people of Hindu religions use to go there for worship and Prayer. On this belief king of Ancient India build a lot of temples with magnificent works all over India. In India, you will find magnificent temples on almost every corner of India. There are various histories or better you can say it mysteries surrounding almost every temple.

India is known as ‘Sone ki chiriya ‘. If we turn the history page, Various foreigners came to India and several times attacked and looted the temples. Despite these attacks India and its temples never bent down, It shines as before. This page is getting short if we are going to cover all the temples located in India. The top 20 temples which are visited by Trousists are introduced here. We believe this blog will refresh your mind.

The Famous Temples in India list is given below.

Somnath Temple is one of the most well-known pilgrimage destinations. Ancient literature including the Rigveda, the Shivpuran, and the Shreemad Bhagavat all mention this temple.  This temple is situated on Gujarat’s western coast. Shree Somnath Jyotirling Temple is highly
revered by followers of Lord Shiva since it is thought to include one of the 12 Jyotirlingas, sacred sites in India thought to be the sites of Lord Shiva’s manifestation.

The name Vishvanatha or VishveshvaraKashi, which refers to Lord Shiva, signifies Ruler of the Universe. One of the most well-known Hindu temples devoted to Lord Shiva is the Vishvanath Temple. One of the 12 Jyotirlinga temples is located here. It is situated in Varanasi, India’s Uttar Pradesh. On the western bank of the revered Ganga is where the temple is located.
Numerous Muslim emperors had destroyed this sacred Shiva temple before, most recently Aurangzeb, the sixth Mughal emperor.  The Maratha ruler Ahilyabai Holkar of Indore erected the existing building in a nearby location around 1780. Recently Government of Uttar Pradesh along with the Government of India renovate the temple with a new look.

Tirupati Balaji Temple also known as Sri Venkateswara Swami Vaari Temple is one of the most famous places for Hindu devotees.  In the Indian state of Andhra Pradesh’s Tirupati district, in the hill town of Tirumala, sits the Sri Venkateswara Swami Vaari Temple, is located. The temple is devoted to Venkateswara, a manifestation of Vishnu. As per belief, Lord Vishnu is thought to have come to earth to deliver humanity from the hardships and sufferings of the Kali Yuga.

Odisha, The land of Lord Jagannath. Odisha’s Puri is where the Jagannath Temple is situated. One of the Char Dham pilgrimage destinations is the Puri Jaganath Temple. The three main deities are dragged on enormous, ornately decorated temple vehicles, during the annual Ratha Yatra event at the Puri temple.

Dwarka, the capital of Lord Krishna. The Dawarladish temple, also known as Jagat Mandir is located in the Gujarati city of Dwarka. Also a stop on the Char Dham pilgrimage, this Hindu temple. devoted to Krishna, who is venerated here as the “King of Dwarka,” or Dwarkadhish. Jagat Mandir or Nija Mandir is the name of the five-story building’s main shrine, which is supported by 72 pillars. Archaeological discoveries indicate that the initial temple was most likely constructed 2,200 years ago.

In the Indian state of Jammu and Kashmir’s Anantnag area, there is a Hindu sanctuary known as Amarnath Temple. The Shiva Lingam at the shrine in this temple is a Swayambhu lingam. The cave is located in Lidder Valley and is 3,888 metres above sea level, 168 kilometres from the city of Anantnag. It is mostly covered in snow throughout the year, with the exception of a brief period in the summer when it is open to pilgrims. The cave is surrounded by glaciers and snowy mountains.

The Kedarnath Temple is located in the town of Kedarnath in the Indian state of Uttarakhand’s Rudraprayag district. Lord Shiva is honoured in this temple. One of the earliest mentions of Kedarnath is found in the Skanda Purana, which identifies Kedara (Kedarnath) as the spot where Lord Shiva discharged the Ganges River’s sacred waters from his matted hair.

Badrinath Temple is one of the destinations of char Dham jatra as it is a holy place for Hindu devotees. The temple is located in Badrinath town and in Chamoli district in the state of Uttarakhand. The town’s primary draw is the Badrinath temple. A black stone representation of Lord Badrinarayan made of Shaligram stone was allegedly found in the Alaknanda River by Adi Shankaracharya. He first placed it in a cave close to Tapt Kund’s hot springs. [10] [11] The King of Garhwal relocated the murti to the current temple in the sixteenth century.

Gangotri Dham is a  pilgrimage destination for Dham Chota Char Dham. The temple is located in the town named Gangotri in Uttarkashi district in the state of Uttarakhand, India. It is the highest temple in which Goddess Ganga is honoured. The sacred River Ganges, also known as Bhagirathi, rises from the nearby Gangotri glacier. The Gangotri Temple, where Goddess Ganga is revered, is the main draw to Gangotri. The magnificent temple is a 20-foot-tall white granite building.

Before starting any new enterprise or endeavour, people first worship Shree Ganesh because he removes barriers (Vighnaharta). Dedicated to Lord Shri Ganesh, the Shree Siddhivinayak Ganapati Mandir is a Hindu temple. It is situated in Mumbai, Maharashtra, India’s Prabhadevi district. Laxman Vithu and Deubai Patil first constructed it on November 19, 1801. This Temple is one of the richest temples in India.

Ramanathaswamy Temple is one of the temples of twelve Jyotirlinga temples. This Hindu temple is dedicated to the god Shiva located on Rameswaram island in the state of Tamil Nadu, India. Hindu devotees believe that Before crossing his bridge to the Lanka ( modern-day island of Sri Lanka),  Rama is said to have built and worshipped the Lingam of Ramanathaswamy (Shiva).

The Konark Sun Temple is located at Konark, which is 35 kilometres northeast of Puri city on the coast of Odisha, India.  King Narasimhadeva I of the Eastern Ganga dynasty is credited with building the temple in 1250 CE. This temple is devoted to the Hindu Sun God Surya. What is left of the temple complex, resembles a 100-foot high chariot with enormous wheels and horses that are all made of stone.

Khajuraho is renowned for its stunning temples and complex sculptures. The city, which is in Madhya Pradesh’s Chattarpur district, is home to magnificent architecture and enthralling historical tales. Only 20 of the nearly 75 temples that are said to have once existed in the area still do. The Khajuraho Group of Monuments, a UNESCO World Heritage Site, was constructed by the Chandela Dynasty during the Middle Ages and is renowned for its Nagara-Style architecture and beautiful statues of nayikas (Hindu Mythological female characters) and deities.

The Golden Temple, also known as  Harimandir Sahib, which means “abode of God,” is a sacred place for Sikhs. This Gurdwara is situated in the Punjab city of Amritsar, India. Along with the Gurdwara Janam Asthan in Nankana Sahib and the Gurdwara Darbar Sahib Kartarpur in Kartarpur, it is one of the holiest places in Sikhism.

Sanchi is one of the holy places for  Buddhist devotees, is a hilltop in Sanchi Town, Raisen District, Madhya Pradesh, and is well-known for its Great Stupa. A significant piece of Indian architecture and a UNESCO World Heritage Site, the Great Stupa at Sanchi. In the third century BCE, Ashoka the Great, the Mauryan monarch, ordered its construction. The basic hemispherical brick building that served as its foundation was placed over the Buddha’s relics.

The  Lingaraja temple is  One of the oldest temples in Bhubaneswar, located in the capital of Odisha. The Shiva-dedicated Lingaraja Temple epitomises Kalinga style and brings to a close the mediaeval phases of Bhubaneswar’s architectural legacy.

Located at a distance of 122 Km from Nasik in the Ahmednagar district of Maharashtra, Shirdi is the home of Sai Baba.

Q.Which are the most famous temples in India?

Two temples which are recognised by UNESCO World Heritage Sites are Sun Temple, Konarak, and Khajuraho Group of Monuments.

Q. What is the full form of UNESCO?

The full form of UNESCO is United Nations Educational, Scientific and Cultural Organization. The United Nations has a dedicated organisation called UNESCO. Its stated goal is to advance global cooperation in education, research, and culture in order to promote peace and security.