Unity in Diversity in India: Essay

Unity in Diversity teaches all humans and living beings to be united and find ways to bond with each other ignoring the differences.
Our Country India is a brilliant example of Unity in Diversity. In India, people of different religions, cultures, castes, etc. have been living together in India. Furthermore, Indian citizens have been living together for many centuries. This certainly shows the intense tolerance and unity in diversity of the Indian people. Hence, India is a country that perfectly demonstrates Unity in Diversity.

Unity in Diversity is an expression used for harmony and peace. It is used among diversified groups so that they can be uniformed among tolerance. Diversities may include caste, creed, color, and nationality. It also includes physical, cultural, linguistic, and political differences.

It teaches all humans and living beings to be united and find ways to bond with each other ignoring the differences. This will lead to an environment in which people can stay together peacefully. “Unity in Diversity” is an old phase and dates back to Western and Eastern cultures.

Once all the people become united, it is difficult to break the bond and separate them. This is where India displays the uniqueness by having a strong bond in difficult situations. In India, you can find one religion person visiting the other on their festival and celebrating it together.

Not only the celebrations are taken care of, but also at times of  sorrow, each and everyone is ready to help the other. Unity is not built in a day. It grows eventually over time. The first and the most important form of unity starts from a family. It starts with the siblings and the parents sharing and caring for each other while being united.

The second form of unity can be seen in schools where all the students stay united as a class. The third form of unity is present in the society in which we live. It can either be seen with your neighbors or the society.  Students are taught lessons about unity right from the starting.

Must Read Article on Mahatma Gandhi

The poem Kakawin Sutasoma has been written by the poet, Mpu Tantular in the 14th century. The poem promotes tolerance between Buddhism and Hinduism. It says that even though the lords of both religions are different, but their ideologies are similar.

The poem inspires people from different religions to be acceptable to others and respect one’s ideology. Even though the idols may be different but the views they had were similar. They wanted that people should stay united in all conditions.

Unity in Diversity in India

India is called a country of unity in diversity. India is a country where all religions are equally treated and respected. You can notice temples, mosques, churches all built within the range of a kilometer. In India, people believe that if they are together, nothing can separate them.

India has been tolerant towards others since ancient times. India has always experienced peace, harmony, and brotherhood due to unity. The Pathans and the Tamils are two extremely different religions yet stay together in harmony. What can be a better example than this?

From the North to the South of India, you can find a lot of dissimilarities starting from food, culture, way of living, and others. But if any problem is faced by a community, all religions come together to support them.

Let’s have a look at a drawing for unity in diversity.

Below we have attached the best posters that depict unity in diversity. 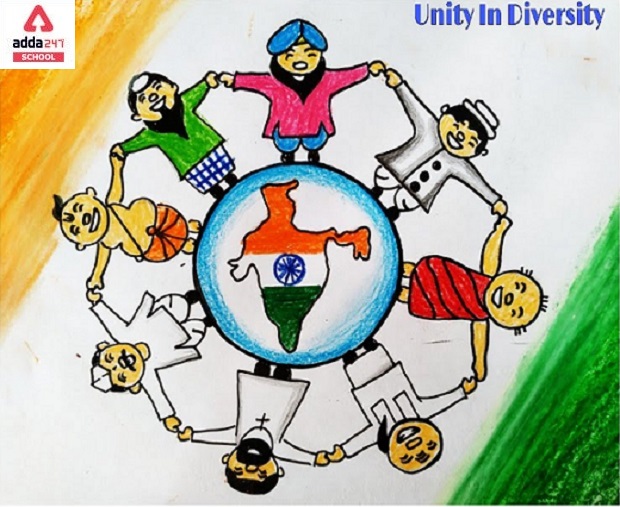 Who coined the phrase unity in diversity?

Unity in Diversity was coined by Pandit Jawaharlal Nehru. It means that despite all the differences, we can be one. No matter how big the problem is, united people can seldom be broken and separated.

If the mutual understanding between all living beings is at peace, they can exist together making the differences, their strong points. People who tend to stay alone face more difficulties as they have to handle all the situations by themselves. This is the reason humans are known as social beings.

Unity in Diversity Quotes and Slogans

Some of the best quotes and slogans for unity in diversity are given below.

FAQ’s on Unity in Diversity in India

What is meant by unity in diversity?

Unity in Diversity is an expression used for harmony and peace. It is used among diversified groups so that they can be uniformed among tolerance.

What is the importance of unity in diversity?

Unity in Diversity is important to co-exist in peace and harmony. Living together despite the differences creates a sense of togetherness.

What is an example of unity in diversity?

The Pathans and the Tamils of India are two extremely different religions yet stay together in harmony.

Who said unity in diversity?

Why India is called a country of unity in diversity?

India is called a country of unity in diversity as all the religions stay together peacefully in India. You can find mosques, temples, churches, and all other religious places within a range of a kilometer.