Skip to content
Online Tution   »   Important Question   »   What are Preservatives 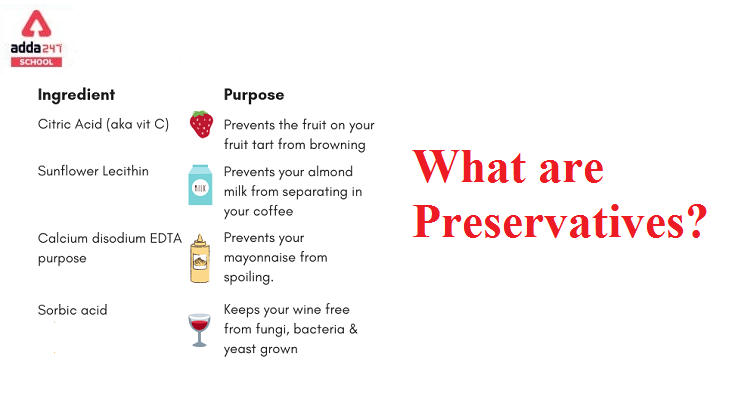 What are Preservatives?: A preservative is a substance or chemical that is applied to things including food, beverages, pharmaceutical medications, paints, biological samples, cosmetics, wood, and many other products to keep them from decomposing due to microbial development or unwanted chemical changes. In general, there are two types of preservation: chemical and physical. Adding chemical components to a product is referred to as chemical preservation. Refrigeration and drying are examples of physical preservation techniques. Food additives with preservatives lower the risk of foodborne diseases, limit microbiological deterioration, and maintain freshness and nutritional quality.

Read About: Biotic and Abiotic Component

What are preservatives in Food?

In foods, a preservative is any of a number of chemical additions used to prevent or delay decomposition due to chemical changes such as oxidation or mould growth. Preservatives, in addition to emulsifying and stabilising substances, aid in the look and consistency of the product.

Preservatives come in a variety of forms, each of which is suited to specific items and effective against specific chemical changes. Antimycotics, such as sodium and calcium propionate, and sorbic acid, prevent mould growth in items like fruit juice, cheese, bread, and dried fruit. Antioxidants (such as butylated hydroxytoluene, or BHT) prevent margarine, shortening, and a range of foods containing fats and oils from becoming rancid due to oxidation. In poultry, fish, and canned foods, antibiotics such as tetracyclines are used to inhibit the formation of dangerous microorganisms.

Some preservatives have an aesthetic function, which means they improve the appearance of the product in addition to preventing deterioration. Chemical preservatives are unnecessary, say opponents of these additives, because modern cleanliness and refrigeration negate the need for them. Representatives from the meat industry support their use, claiming that the natural brownish colour of these foods would be unappealing.

What are Chemical Preservatives?

Chemical food preservatives are compounds that, under specific conditions, either inhibit the growth of germs without necessarily killing them or prevent quality degradation during production and distribution. Some natural dietary elements that, when added to foods, impede or prevent the growth of microbes are included in the first group. Sugar is used in the preparation of jams, jellies, and marmalades, as well as in the candying of fruit. This includes the use of vinegar and salt in pickling, as well as the use of alcohol in brandying.

To prevent the growth of microbes, some chemicals that are not found in foods are added.

The main chemical preservatives are sodium benzoate and various benzoates. Most nations allow the use of benzoates in some products in defined amounts, though others require notification of their usage on the food container’s label.

The most common inorganic chemical preservatives are sulphur dioxide and sulfites. Sulfites are used to preserve fruits and vegetables because they are more efficient against mould than yeasts. Sulfur compounds are widely employed in the winemaking process.
Read About: Mustard

FAQs on What are Preservatives?

For millennia, salt, sodium nitrite, spices, vinegar, and alcohol have been used to preserve food. To reduce microbial development that leads to spoilage and to slow changes in colour, texture, and flavour, sodium benzoate, calcium propionate, and potassium sorbate are utilised.

What are preservatives in food?

Preservatives are chemicals that are added to foods to keep them from rotting. They can be natural or synthetic.

What natural preservatives are there?

Are there any preservatives in eggs?

The egg has been marketed as a healthy product that is free of preservatives and additives.

Which preservative is the healthiest?

Salt has long been regarded as one of the most effective natural preservatives, and Himalayan salt is even better.