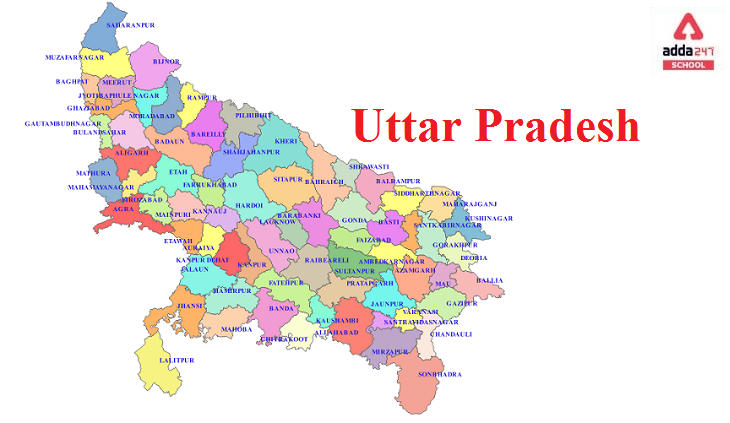 In January 1950, as the state attained freedom with the rest of India, it regained its original state and came to be known as Uttar Pradesh, which means a state in the North of India. The state is divided into 18 divisions and 75 districts. The judicial capital of the state is “Allahabad”.

The state was previously known for sugar production. Recently, the maximum economy of the state depends upon the service industry. The state lists the second position for the economy in India. The service industry includes services like travel, tourism, hotel industry, and insurance.

Uttar Pradesh lies in the center with one country and more than 3 states covering it on all sides. In the north, the state of Uttar Pradesh has borders with Uttarakhand and Nepal, Jharkhand and Chattisgarh to the southeast, Madhya Pradesh in the south, along with Rajasthan, Haryana, and Delhi on the west.

On January 26, 1950, after India attained a republic, the state of Uttar Pradesh was awarded the present name of “Uttar Pradesh”. Uttar means north and Pradesh means a state in Hindi. It together means Northern State. Lucknow is the capital city of Uttar Pradesh.

Area and Population of Uttar Pradesh

About the Physiography of Uttar Pradesh (UP)

The land of the Ganges is fertile and suitable for constructing homes, and fertile for sowing seeds. People reside in this part from ancient times. This is a populated region and is busy mostly during the day.

The southern uplands are at a higher altitude and not suitable for residing. This is a part of the Vindhya Range.
Read About Mahatma Gandhi

Rivers and Farming in Uttar Pradesh

The state is adequately filled with rivers from all sides. The biggest one is the Ganges and its tributaries – the Yamuna, the Ramganga, the Goamti, the Ghaghara, and the Gandak Rivers.

The Chambal, Betwa, and the Ken along with the Son River are a part of the state rivers. People can easily use the water for daily use along with farming. Farming is done by the majority section in Uttar Pradesh. The soil is mixed with red and black soil which is the best for cultivation.

The Climate of Uttar Pradesh

The weather is bearable and comfortable. During monsoons, people wear clothes of full length to avoid catching a cold. At nights during monsoons, the weather is just pleasant and people love to enjoy sitting with family. The state also faces drought once a year.

Animals in Uttar Pradesh include tigers, lions, elephants, Wild boars, and Deer. You can also spot pigeons, wild duck, woodpecker, duck, and quails. Plants in Uttar Pradesh are mostly forests having a variety of fruit trees and bamboos.

Some of the largest cities of the state are “Agra”, “Kanpur”, “Prayagraj”, and “Varanasi”. These cities are well connected with the remaining ones through proper transport communication. They also have the wholesales of fruit markets and essentials.

Commodities are shared throughout the state by roads. The highways are well built with proper street lights.

The homes built during ancient times were of mud, with straws and wood as the roof. Recently, cement plasters are used and all of the villages are well connected to the nearby cities in Uttar Pradesh.

Electricity is sufficiently available in most areas. People mostly reside on the plains with nearby markets for essential buy.

The people of Uttar Pradesh are most friendly and loving. They will consider you as family members even if you visit them for a day. Guests are taken special care of. The dressing sense and education are at par with other states of India.

Yogi Adityanath of the Bharatiya Janata Party is serving as the incumbent chief minister of Uttar Pradesh.

How to Reach Uttar Pradesh

People all over India or from abroad can reach Uttar by using three means namely, Air, Water, and Land ways. Check them below.

How to Reach Uttar Pradesh: Air

The state of Uttar Pradesh currently has two international airports. One is at Varanasi (Lal Bahadur Shastri Airport) and the other is at Lucknow (Chaudhary Charan Singh Airport), which is the capital of the state.

How to Reach Uttar Pradesh: Water

The state of Uttar Pradesh is surrounded by rivers. You can travel through the largest river of them all, the Ganges. The tributaries of the Ganges like the Yamuna, the Ramganga, the Goamti, the Ghaghara, and the Gandak can also be used for commutation.

How to Reach Uttar Pradesh: Land