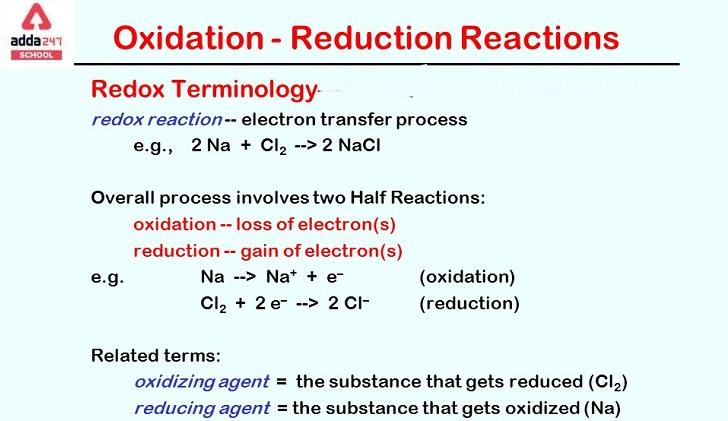 Oxidation is a process which involves the loss of electrons or a change in the oxidation state of an atom, an ion, or a group of atoms in a molecule. Because dioxygen was the first documented oxidising agent, the word oxidation originally meant a reaction with oxygen to generate an oxide.

Redox is a chemical reaction that involves changing the oxidation states of atoms. Redox processes are defined by the real or formal transfer of electrons between chemical species, with one species undergoing oxidation and the other undergoing reduction; oxidation implies losing electrons and reduction means gaining electrons. The reducing agent is one of the species involved in this chemical reaction, whereas the oxidising agent is another. The chemical species that loses an electron is said to have been oxidised, while the chemical species that gains an electron is said to have been reduced.
Redox reactions are common in organic chemistry. Changes in oxidation states cause this, although there is no clear electron transfer. In the case of wood combustion, the oxidation state of carbon atoms in the wood increases while the oxidation state of oxygen atoms drops as carbon dioxide and water are produced. The oxygen atoms undergo reduction, acquiring electrons in the process. Meanwhile, the carbon atoms lose electrons due to oxidation. In this reaction, oxygen is the oxidising agent and carbon is the reducing agent.
Although the generation of oxides from oxygen molecules is typically connected with oxidation events, oxygen is not always present in such reactions. This occurs because various chemical species can perform the same job.
Redox reactions might take a long time to complete. The creation of rust or the burning of fuel are two examples. There are simple redox processes in the human body, such as carbon oxidation to produce carbon dioxide (CO2) or carbon reduction to produce methane (CH4), and more sophisticated redox processes, such as glucose oxidation (C6H12O6).

Read about: Rice bowl of the world

The Process: Reduction and Oxidation

Oxidizing agents, oxidants, and oxidizers are chemicals that have the ability to oxidise other compounds; causing them to lose electrons. An electron acceptor is another name for the oxidising agent. The most basic oxidizer is oxygen.

What exactly is oxidation?

During a chemical reaction, oxidation is defined as the removal of one electron from a molecule.

What happens during the oxidation process?

What is the definition of oxidation in the human body?

What is food oxidation?

The deterioration in the quality of food products, including off-flavours and off-odours, is caused by oxidation, a chain process that occurs in the presence of oxygen.

What is the harm of oxidation?

Oxidation can harm important molecules in our cells, such as DNA and proteins, which are involved in a variety of bodily functions. Because DNA and other molecules are required for cells to operate properly, if too many of them are broken, the cell will malfunction or die.