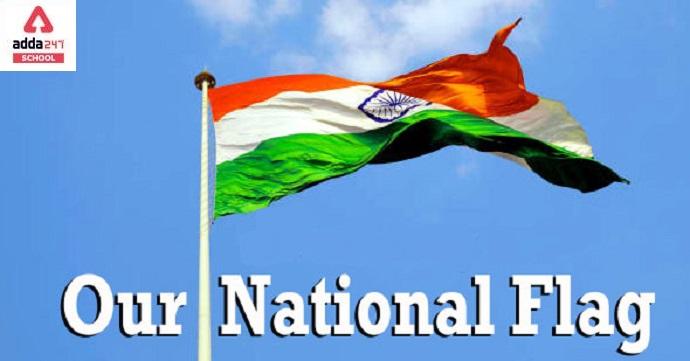 Triranga: Our National Flag of India

Our National Flag of India is called? Tiranga, which means “three colours” or “tricoloured,” is the common name for the national flag. It’s a horizontal tricolour with deep saffron at the top, white in the middle, and the Ashoka Chakra, a 24-spoke wheel in navy blue in its centre; and green at the bottom. The proportion of the flag’s width to its length is 2:3. The Dharma Chakra is located in the centre of the wheel, with 24 navy blue spokes (Wheel of Law).

It was accepted in its current form during a sitting of the Constituent Assembly on 22 July 1947, and on 15 August 1947, it was designated as the official flag of the Dominion of India. Following that, the flag of the Republic of India was kept.

The term “tricolour” is almost invariably used in India to refer to the Indian national flag. The flag is based on the Swaraj flag, which was designed by Pingali Venkayya for the Indian National Congress.
Read About: Right To Freedom

Triranga: National Flag of India name is called The Tricolour

Saffron Colour of the Tricolour

White Colour of the Tricolour

The colour white is associated with honesty, calm, and purity. It emphasises the significance of keeping the country’s peace.

Green Colour of the Tricolour

The colour green is associated with faith and chivalry. It is a symbol of plenty, vitality, and life.

Read About: Unity in Diversity in India

Triranga: What is the name of our National Flag of India?- History

The Indian National Flag symbolises the country’s long struggle for independence. It denotes India’s status as an independent republic. The flag was created in its current form on July 22, 1947, at a meeting of the Constitutional Assembly. From 15 August 1947 to 26 January 1950, it served as the national flag of the Dominion of India, and then as the national flag of the Republic of India.

The Indian flag has a long history dating back to the pre-independence period. The first Indian flag was created somewhere between 1904 and 1906. It was created by an Irish Swami Vivekananda disciple. Sister Nivedita was her name, and this flag became known as Sister Nivedita’s flag throughout time. The colours red and yellow were used in this flag. The colours red and yellow represented the struggle for freedom and victory, respectively. The words “Bonde Matoram” were written in Bengali on it. The flag also included a figure of ‘Vajra,’ the god Indra’s weapon, and a white lotus in the centre. The ‘Vajra’ represents strength, while the lotus represents purity.

In 1906, a new flag was designed after Sister Nivedita’s. It was a tricolour with three equal strips of blue, yellow, and red. The blue strip of this flag had eight stars of varying forms. The red strip had two symbols, one depicting the sun and the other depicting a star and crescent. ‘Vande Mataram’ was written in Devnagiri script on the yellow strip.

Another variant of the Indian flag was designed the same year. It was tricolour as well, but the colours were different. It was orange, yellow, and green in colour, and had eight half-open lotuses on it, earning it the nickname “Calcutta flag” or “Lotus flag.”

Madam Bhikaji Rustom Cama’s flag arrived in 1907. Madam Cama raised the flag on August 22, 1907, in Stuttgart, Germany, making it the first Indian flag to be hoisted in a foreign land.

Pingali Venkayya, a writer and geophysicist, created a flag in 1916 with the goal of uniting the entire nation. He sought Mahatma Gandhi’s approval and met with him. Mahatma Gandhi advised him to include a charkha in the flag as a symbol of India’s economic revival.

In 1917, the Bal Gangadhar Tilak-led Home Rule League created a new flag, as Dominion status for India was being sought at the time.

Another new flag was made in 1921, to symbolise all of India’s communities in the national flag, as Mahatma Gandhi desired.

However, some people were dissatisfied with the flag’s community interpretation. With this in mind, a new flag was created, replacing red with ochre. Saffron was the colour of Hindu yogis as well as Muslim darvesh. The Sikh community, on the other hand, wanted a separate representation in the flag or the entire removal of religious colours from the flag. Pingali Venkayya raised another flag as a result of this. Saffron was on top, white was in the middle, and green was at the bottom. The ‘Charkha’ was positioned in the middle.

When India became independent, a committee led by Rajendra Prasad was formed to choose the country’s national flag. The committee chose to use the Indian National Congress flag as the flag of independent India, with appropriate changes. As a result, the Indian flag of 1931 was adopted, but the ‘Charkha’ in the middle was substituted by ‘Chakra’ (wheel), and thus our National Flag was born. 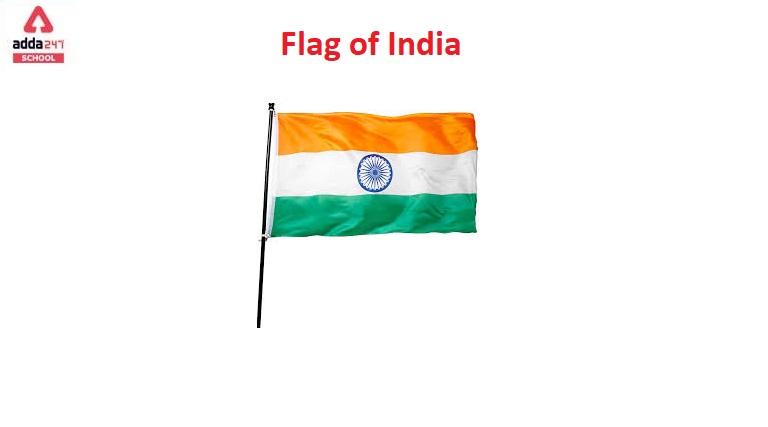 What is the name of our national flag?

The term “tricolour” is used in India to refer to the Indian national flag.

Who designed the Indian flag?

Pingali Venkayya designed the Indian flag, which was initially presented to Mahatma Gandhi, the head of the All-India Congress, in 1921.

Why is the Ashoka Chakra blue?

Many of Emperor Ashoka’s inscriptions feature a chakra. It is said that its colour is blue. The sky, the sea, and the universal truth are all represented by this symbol.

Which country’s flag is the oldest?

Denmark is the country with the oldest flag in the world.

What does the flag’s colour scheme imply?