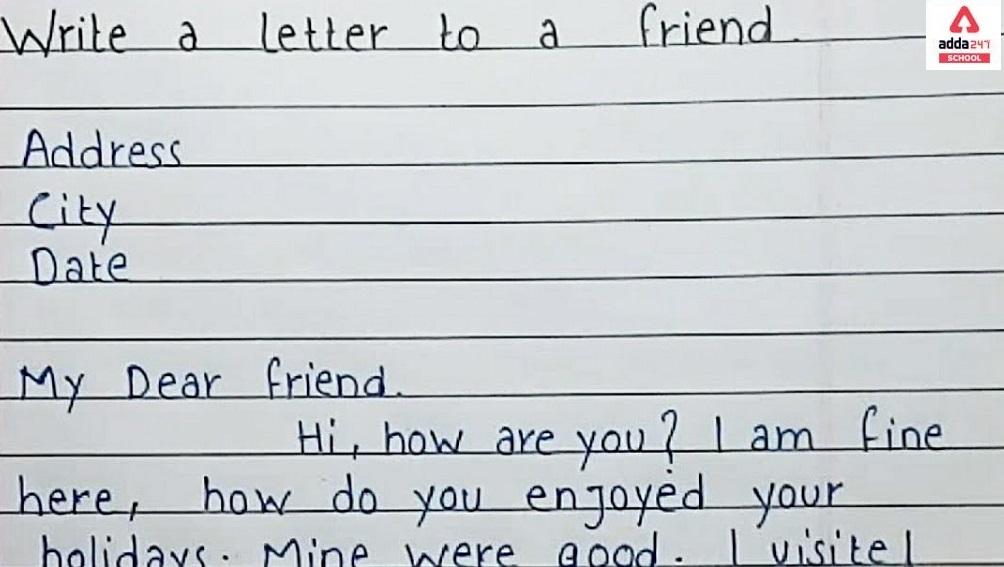 Letter Writing: The art of composing a letter was seen as a crucial requirement until the development of modern technology made communication so simple. Even now, letters remain a vital tool for communication in both our professional and personal life. Therefore, let’s educate ourselves on the complexities of letter writing.

A letter is a written communication that is printed or handwritten on paper. Although it is not a necessity in and of itself, it is typically mailed or delivered to the addressee in an envelope. Any such message sent by mail is a letter, a written exchange of ideas between two people.

Let’s start by understanding that there are basically two types of letters: formal and informal. But there are also many kinds of letters based on their formalities, contents, intended recipients, etc. Let’s examine a few of the letter types.

Formal Letter:- These letters follow a specific example and convention. They are completely kept proficient in nature, and straightforwardly address the issues concerned. Any sort of business letter or letter to specialists falls inside this given classification.

Informal Letter:- These are private letters. They need not follow any set example or stick to any conventions. They contain individual data or are a composed discussion. Casual letters are for the most part kept in touch with companions, colleagues, family members, and so on.

Business Letter:- This letter is composed among business journalists, by and large, and contains business data, for example, citations, orders, grievances, claims, letters for assortments, and so on. Such letters are in every case stringently formal and follow construction and example of conventions.

Social Letter:- An individual letter composed in the event of an exceptional occasion is known as a social letter. Celebratory letters, sympathy letters, greeting letters, and so on are social letters.

Since we have taken in the fundamentals of imparting by means of letters and the kinds of letters too, let us center around certain tips for real letter composing.

This is obviously the first step in writing a letter. You must be able to identify the types of letters you write. This is determined by the addressee of the letter and the information conveyed by the letter. Suppose you are writing a letter to the principal of a university asking for a leave of absence. This will be a formal letter (type of formal letter with template). But let’s say you write to an old college professor after a long absence. In that case, this is a personal (unofficial) letter.

Proper opening of the letter is of utmost importance. A formal letter begins with a specific structure and greeting that is formal in nature. A free-form letter can be addressed to a person’s name or a free-form greeting at the writer’s option. When concluding a letter, it is also important to note the type of letter. A formal letter ends respectfully and impersonally, while an informal letter can end with a more personal note.

Once you start writing, try to get to the point as quickly as possible. Especially in formal letters, it is important to immediately clarify the purpose of the letter.

Letters should always be polite and considerate. Even if it is a letter of complaint, the point must be written carefully and politely. Therefore, polite expressions and kindred language should be used in all kinds of letters.

Another important factor to consider is the length of the letter you are writing. Keep in mind that formal letters are usually to the point, concise and brief Long formal letters usually do not have the desired effect on the reader. The length of an informal letter is determined by the letter’s message and its relationship to the recipient.

Letter Writing: How to write a formal letter (format)?

A formal letter always has a salutation at the beginning of the written content to indicate that your message is about to begin. Most salutations begin with “Dear” followed by the recipient’s name. All salutations use the title in uppercase and end with a comma. You can also use the job title or department name if you don’t know the recipient’s name. B. “Dear Human Resources” As a last resort, use the general salutation “To those concerned” under all circumstances. Avoid “Dear Sir or Madam” as it’s a bit dated.

Step 3:- Body of the letter

Unlike personal letters, formal letters are to the point and concise, so don’t be afraid to get straight to the point. Some formal letters are only a sentence or two long, although others can go on for paragraphs if there’s a lot of information to convey. The important thing is that you stay focused and avoid unnecessary topics.

Formal letters also use a standard complimentary closing or sign-off, similar to greetings, before ending with a formal signature. One of the most common closings is “sincerely“, with variations such as “with sincere thanks” and “sincerely yours“. Other common signoffs are “Best” and “Yours”. Unlike greetings, closers use sentence capitalization. Always capitalize the first letter of the liberal degree, but capitalize only the first letter. Just like greetings, they always end with a comma.

I, Sagar Rathod’s father, would like you to send me a pamphlet with relevant information about the advertisement you placed in today’s newspaper.

My son passed his IX grade and is now in X grade. I was looking for the best support for the current school year. Your ad looks very promising. However, before making a final decision, I would like to take a closer look at your brochure. I understand that this is an important year for my child, so please send me the details as soon as possible.

I await your reply. Thank you.

Letter Writing: How to write an informal letter (format)

As the name suggests, informal letters are much more casual than formal letters. That means there aren’t that many rules and guidelines, and no one cares if you don’t put the space in the right place. However, there is a correct format that people are familiar with, so as a minimum, follow the steps below.

The first thing you need to write is your address, the author’s address (basically the sender’s address). We usually write our address on the top left of the page. Your address must be correct and complete.

Then write the date just below the address. This allows the reader to know when the informal letter was written. By doing so, he will be able to better sympathize with the content of the letter. The date should preferably be in an extended format.

Like formal letters, informal letters begin with a polite greeting to the recipient. The standard format is the same. The word “Dear” is followed by the person’s name and the title is capitalized, such as “Dear Mr. Shivam“.

Step 4:- Body of the letter

The body of the letter is where you write your message, and informal letters are often used to share news and keep in touch. They tend to have a conversational tone. This means that you are free to include any slang or language you use when speaking directly.

Step 5:- Closing of the letter

Informal letters also use an independent knot before signing and follow the same format as formal letters. This includes capitalizing sentences (only the first letter is capitalized), adding a comma at the end, and leaving enough space to sign your name if sending a paper letter.

My joy knew no bounds when I got to know that you did well in school and made your dreams come true. I was so happy that I wanted to congratulate you directly. The results proved that hard work, determination, and perseverance yield good results.

You worked hard and very passionately. I know you were very nervous too, but I was always sure you would come out on top. I apologize for not being able to attend the celebration even though it was my wish. See you soon.

Be encouraged and do your best. Your future is very bright and my parents and sister have sent lots of love and heartfelt congratulations.

With lots of love and best wishes.

Q. 1 What are the main two types of letters?

Q.2 What is a formal letter?

Ans. A formal letter is one written in a formal and straightforward language and follows a certain stipulated format. Such letters are written for official purposes to authorities, dignitaries, colleagues, seniors, etc, and not to personal contacts, friends, or family.

Q.3 What is an informal letter?

Ans. Informal letters are personal letters that are written to your friends or family to know about what is going on in your life and to convey your regards.

Q.4 What is the major difference between formal and informal letters?