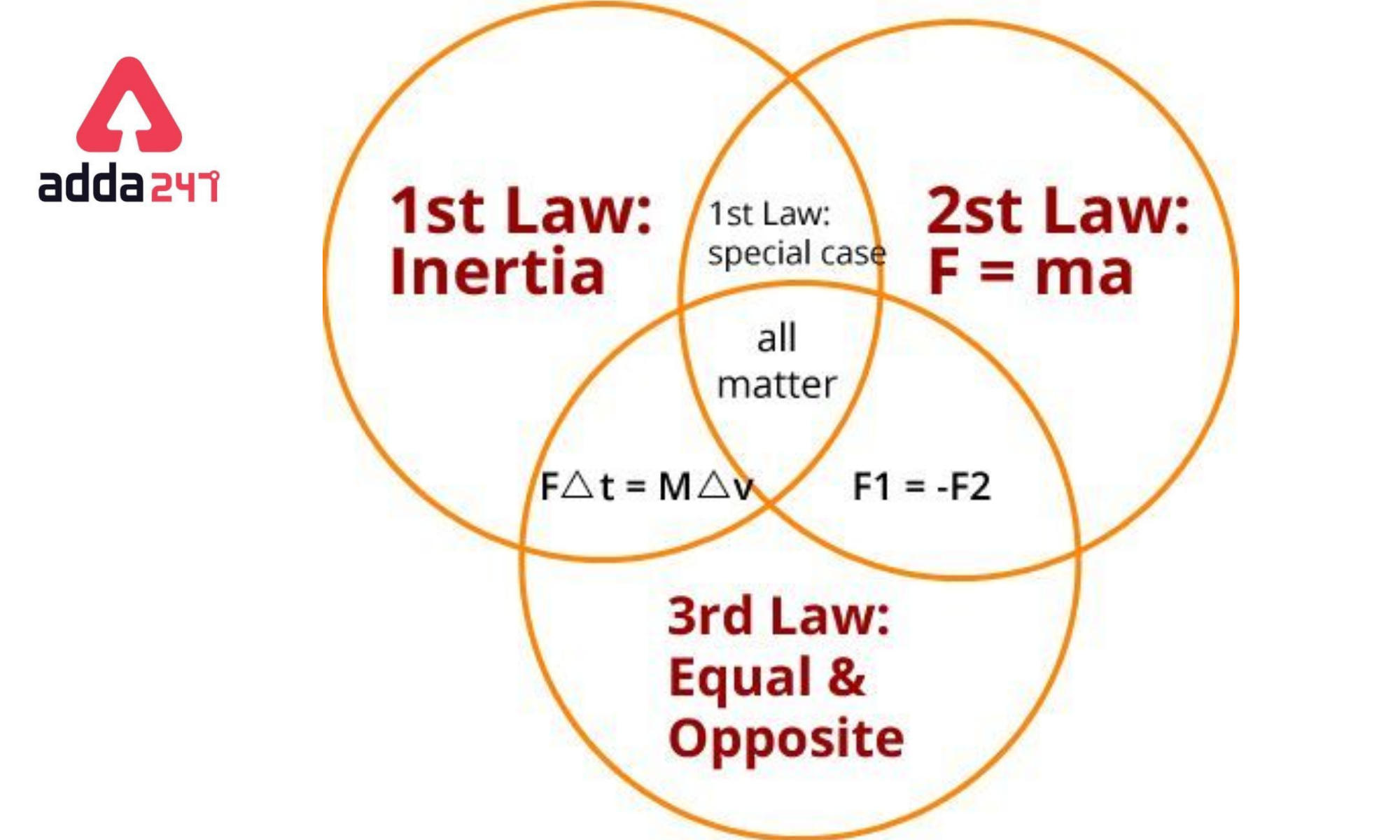 Newton’s laws of motion are three assertions that describe the relationships between the forces acting on a body and its motion, and they are the cornerstone of classical mechanics. They were first stated by English physicist and mathematician Isaac Newton.

Unless acted upon by a force, a body remains at rest or moves at a constant speed in a straight path.

When a body is acted upon by a force, the force equals the temporal rate of change of its momentum.

Both the net force and the acceleration of the object are vectors that point in the same direction. This form of the law is valid for an object with a constant mass m. According to this equation, a proportional acceleration is produced by applying a net force to a body. It also implies that if a body accelerates, it is subjected to a net force.

When two bodies exert forces on one other, the magnitude of the forces is the same, but the orientations are opposite.

According to the third law, all forces between two things are equal in magnitude and opposed in direction: if one object A exerts a force FAon another item B, then B simultaneously exerts a force FB on A, and the two forces are equal in magnitude and opposing in direction: FA = – FB. According to the third rule, all forces are interactions between separate bodies or various regions within one body, and hence no force exists that is not accompanied by an equal and opposite force.

In some instances, one of the two bodies, say Body A, determines the magnitude and direction of the forces altogether; the force exerted by Body A on Body B is called the “action,” and the force exerted by Body B on Body A is called the “reaction.” This law is also known as the action-reaction law, because FA is the “activity” and FB is the “response.” In other cases, both bodies decide the amount and direction of the forces, and it isn’t required to label one as the “action” and the other as the “reaction.”

For nearly 200 years, Newton’s laws have been proved via experiment and observation, and they are excellent approximations at the scales and speeds of everyday life. For the first time, Newton’s laws of motion, along with his law of universal gravitation and calculus mathematical procedures, provided a cohesive quantitative explanation for a large range of physical events. For example, Newton demonstrated that his laws of motion, when paired with the law of universal gravitation, explained Kepler’s laws of planetary motion in the third volume of the Principia.

Newton’s rules are applied to bodies that are idealised as single point masses, in the sense that the size and shape of the body are ignored in order to focus more easily on its motion. When the resultant of all external forces acts through the centre of mass of the organism, this can be accomplished. Even a planet can be idealised as a particle in this fashion for studying its orbital motion around a star.

Ques. What are Newton’s 1st 2nd and 3rd laws of motion?

Ans. According to the first law, unless a force acts on an item, it will not modify its motion. The force on an item is equal to its mass times its acceleration, according to the second law. When two things contact, the third law states that they apply forces of equal magnitude and opposing direction to each other.

Ques. Which is Newton’s 2nd Law of Motion?

Ans. The second law of Newton is a quantitative description of the effects that a force can have on a body’s motion. It asserts that the force imposed on a body equals the time rate of change of its momentum in both magnitude and direction.

Ans. Sir Isaac Newton has a vast mind, as evidenced by his discoveries in the fields of gravity, light, motion, mathematics, and other subjects. According to legend, Isaac Newton developed gravitational theory after witnessing an apple fall in 1665 or 1666.

Ques. What is the fourth law of motion?
Ans. Some further include a fourth law, which claims that forces add like vectors, or that forces follow the superposition principle. Newton expressed the law geometrically as a parallelogram of force, which he derives from the first and second laws as a corollary (in fact, his Corollary I in the Principia).