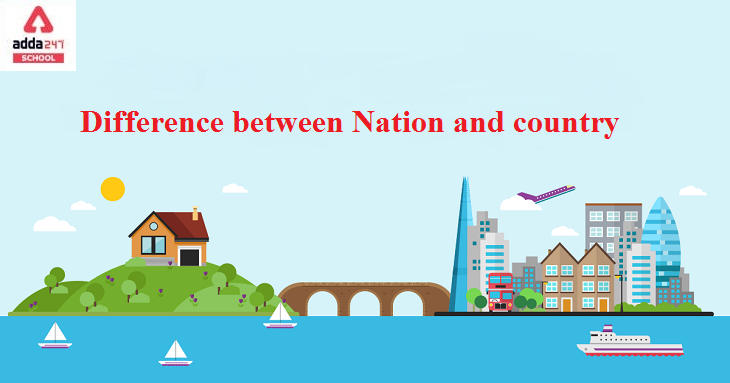 Difference between Nation and Country check here all points. The terms “country” and “nation” are frequently confused, leading to the misconception that they are two different words with the same meaning. However, there are significant disparities between the two.

A country is a unique political and territorial entity. It’s also known as a person’s birthplace, home, or citizenship country.

A country can be a sovereign state or a portion of a larger state, a non-sovereign or formerly sovereign political division, a physical area with a government, or a geographic region including previously autonomous or differently linked people with distinct political traits. It isn’t born with the ability to rule.

A nation is a group of people who share a common language, history, ethnicity, culture, and, even a common geographical area. A nation is a group of people who have a common identity. A nation, as opposed to an ethnic group, is more explicitly political; it has been described as “a fully mobilized or institutionalized ethnic group.” Some nations are associated with ethnic groupings, while others are associated with adherence to a social and political constitution; yet, some nations do not modify their definition and continue to refer to themselves as cultures. A nation can alternatively be defined as a cultural-political community that has realized its autonomy, unity, and specific interests.
Mus Read: What is the Capital of Australia?

What is the difference between nation and country?

Difference between Nation, Country, and State

State, nation, and country are all phrases used to define groupings of people that have a common location and a lot in common. Nations and countries, on the other hand, may or may not be political entities, whereas states and sovereign states are.

A sovereign state is a space or region with internationally recognised borders where people reside on a permanent basis. Foreign and domestic trade regulations are in place. The ability to issue cross-border legal tender, as well as a globally recognised government that provides public services and police power, as well as the authority to form treaties, fight a war, and take other acts on behalf of its people, is there in a sovereign state.

Many such formations have geographic and cultural importance, as well as many of the characteristics of a sovereign state, yet they are not sovereign nations in their own right. Territories, non-sovereign states, and countries all fall within this category.

A nation-state is a group of people who have their own sovereign government. The history, language, ethnicity, and culture of people who live in nation-states are shared. The vast majority of people born in these countries have similar ancestry and culture.
Read About: Art and Tradition in Capital of Uttar Pradesh

FAQs on Difference between Nation and Country

Is India a nation or a country?

India is a country in South Asia that is formally known as the Republic of India. It is the world’s seventh-largest country in terms of land area, the second-most populated country, and the world’s most populous democracy.

Is the United States a country or a nation?

The United States of America, also referred to as the US or America, is a country largely located in North America.

Is it possible for a country to not be a nation?

A stateless nation is an ethnic group or country that does not have its own state and does not make up the majority of any nation-state. The word “stateless” suggests that the group “ought” to have one (country).

Is England a country or a nation?

England is one of the United Kingdom’s member countries.

Is Canada a country?

Canada is a North American country.