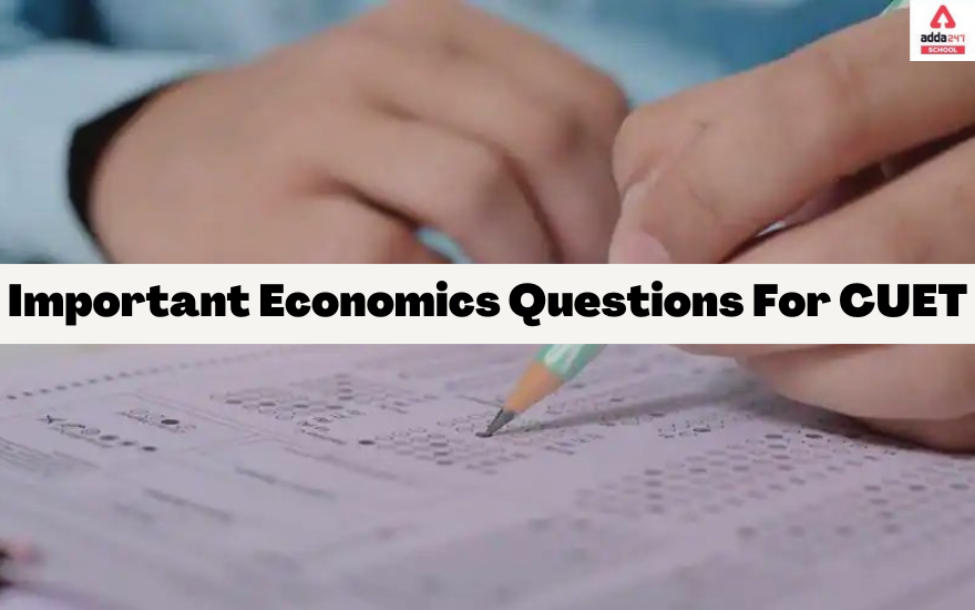 Important Questions Of Economics For CUET

CUET Economics Important Questions: According to the National Test Agency, the CUET Exam 2022 will be held in July (NTA). CUET is divided into three sections: language tests, domain-specific tests, and general tests. Only domain-specific courses are included in Section 2 of the CUET exam. Economics is included in this section. So, today we will cover economics subject. Here we will provide you with a list of CUET important questions for Economics.

The CUET Economics Syllabus is divided into two large parts. Among these two parts, each section has multiple sub-sections that are practically equally important in the article. Introduction to macroeconomics and Indian economic growth are the topics. All of the components are interconnected in some fashion. To understand these concepts thoroughly and efficiently, a student should study each of them in the CUET economics course. Each of these areas should be given the same amount of attention and effort by the candidate.

Q1. What is the shape of the Keynes Aggregate Supply before the level of full employment is attained?

Q2. What is a fiscal measure of correcting deficient demand?

(a) Increase in public expenditure and decrease in taxes

(b) Decrease in public debt

Q5. If for a country net factor income from abroad is negative then:

Q6. Which is the measure of correcting excess demand?

(b) Reduction in taxes

Q7. The market value of all final goods and services produced in an economy over a year is called:

Q8. Which of the following is correct?

Q9. Which service is included in Tertiary Sector?

Q10. What is the consumption of fixed capital called?

Q11. For a four sectors or open economy the condition for equilibrium is:

Q13. The market price of all final goods of a country in a year is known as:

Q14. Which one is included in the four-sector model?

Q15. What are the advantages of Barter System?

(d) All the above

Q16. Which one is included in the three-sector model?

Q17. What are the necessary conditions of Barter System?

(d) All the above

Q18. “Money is a pivot around which the whole economy clusters.” Who said it?

Q19. Which is the correct order of money evolution?

Q20. The Tata Iron and Steel Company (TISCO) were incorporated in:

Q22. Which of the following are ‘land tenure systems?

Q24. When was the planning commission set up?

Q25. One of the following was high during the British rule over India:

Q26. Whose estimate of national income was considered very significant?

Q27. The Industrial policy which worked till 1990 was adopted in:

Q29. The first five year plan was launched for a period from _

Q31. What is the investment limit in small scale industries?

Q32. Which of the following refers to relaxation of previous government restrictions?

Q35. When was VAT introduced in most of the States of India?

Q36. Which organization collects data on poverty in India?

Q37. The expenditure by the government on education is expressed as:

(a) Percentage of total government expenditure

(b) Percentage of GDP

Q38. Estimation of Poverty in rural economies is at per day consumption of calories:

Q39. In India, which of the following organizations regulates the health sector?

Q40. Which one of the following is an indicator of educational achievement in a country?