Skip to content
Online Tution   »   Important Question   »   Who is the First Governor General... 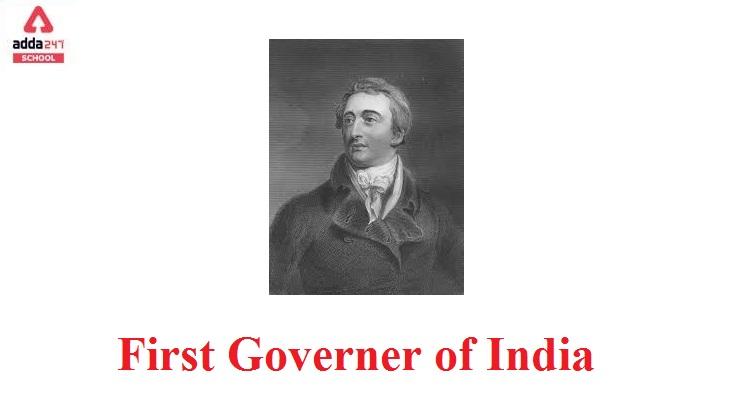 Who is the first governor of India?

Who is the first Governor of India? The answer is here. The Governor-General of India was the British monarch’s envoy in India, as well as the Indian head of state’s representative following India’s independence in 1947. The office of Governor-General of the Presidency of Fort William was established in 1773. Only Fort William was under his direct command, but he oversaw other East India Company officers in India. In 1833, the official was given complete control over all of India, earning him the title of “governor-general of India.”

In 1772–1785, English statesman Warren Hastings served as the first Governor of the Presidency of Fort William of Bengal, the leader of the Supreme Council of Bengal, and therefore the first de facto Governor-General of Bengal. He is credited with creating the foundations of the British Empire in India, together with Robert Clive. He was a reformer and organiser with a lot of energy. He led the East India Company’s soldiers against a coalition of native nations and the French from 1779 to 1784. Finally, the well-organized British side prevailed, while France’s influence in India dwindled. He was impeached and accused of corruption in 1787 but was acquitted in 1795 after a long trial. In 1814, he was appointed to the Privy Council.

Who was the first governor of India

Who is the first woman governor of India

Each of India’s twenty-eight states has a governor who is the constitutional head of state. The governor is appointed by the President of India for a five-year term and serves at the pleasure of the President. The governor is the de facto leader of the state government, and all executive decisions are carried out in his name. The governor, however, must act on the advice of the council of ministers, which is led by the chief minister and has de facto executive authority at the state level.

Sarojini Naidu was the first Indian woman to be elected governor of a state. She was the governor of Uttar Pradesh from August 15, 1947, until March 2, 1949. Padmaja Naidu, her daughter, is West Bengal’s longest-serving female governor, having served for 11 years. Tamilisai Soundararajan was just appointed as Telangana’s first female governor.
Read About: Mahatma Gandhi

The Reserve Bank’s first Governor was Sir Osborne Smith. He was a professional banker who worked for the Bank of New South Wales for almost 20 years and the Commonwealth Bank of Australia for ten years before joining the Imperial Bank of India as Managing Governor in 1926.

The first Indian Governor of the Bank was Chintaman Dwarkanath Deshmukh, a member of the Indian Civil Service. When he was designated Government’s liaison officer in 1939, he began his engagement with the Bank. He went on to become Secretary of the Bank and then Deputy Governor in 1941. Following the death of James Taylor, he assumed control of the Bank and was named Governor in August 1943.

He also represented India in the Bretton Woods conference in 1944, witnessed India’s independence and partition, and saw the Reserve Bank’s assets and liabilities divided between India and Pakistan. When the Bank was nationalized on January 1, 1949, he assisted in the smooth transition of the Bank from a shareholder’s institution to a state-owned corporation. Between 1950 and 1956, he was the Union Finance Minister.
Read About: Maharaja Ranjit Singh

FAQs on First Governor of India

Who was India’s first Governor-General?

Who was the most recent Viceroy?

The last Viceroy of British India was Lord Louis Mountbatten.

What is the name of India’s first female governor?

Sarojini Naidu was the first Indian woman to be elected governor of a state. She was the governor of Uttar Pradesh from August 15, 1947, until March 2, 1949.

Who is in charge of appointing the governor?

The President, by warrant under his hand and seal, appoints the Governor of a State (Article 155).

Who is the last Governor-General of Bengal?