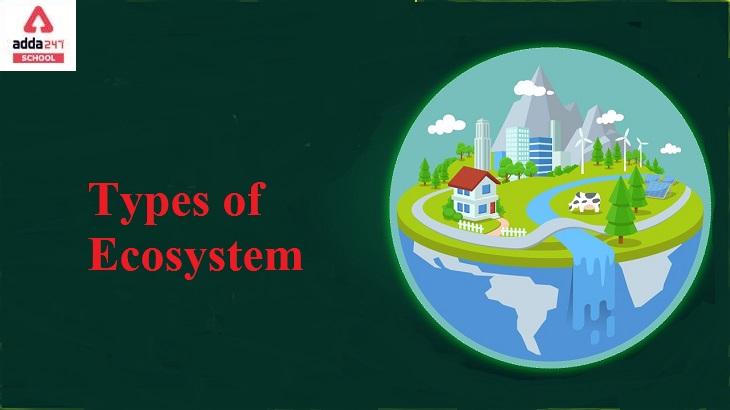 Types of Ecosystem: An ecosystem is made up of all the species that interact with each other as well as the physical environment in which they live. These biotic and abiotic components are linked via nutrient cycles and energy flows. Photosynthesis brings energy into the system, which is absorbed into plant tissue Animals, by eating plants and each other, play an important role in the transfer of resources and energy through the system. They also have an impact on the amount of plant and microbial biomass that is present. Decomposers release carbon into the atmosphere and enhance nutrient cycling by turning nutrients stored in dead biomass back into a form that plants and microbes can utilize.
Read About: Biosphere Reserves

Depending on the level of the water and the features of the shoreline, marine ecosystems can be separated into several zones. Whales, sharks, and tuna live in the oceanic zone, which is a huge open area of the ocean. The benthic zone is made up of submerged substrates that are home to a variety of invertebrates. The area between high and low tides is known as the intertidal zone. Mudflats, seagrass meadows, mangroves, rocky intertidal systems, salt marshes, coral reefs, and lagoons are examples of near-shore zones. Hydrothermal vents may create the base of the food web in deep water, where chemosynthetic sulphur bacteria form the base of the food web.

Freshwater ecosystems are a subset of aquatic ecosystems on the planet. Lakes, ponds, rivers, streams, springs, bogs, and wetlands are among them.
Read About: UNESCO

A forest ecosystem is a unique ecology with a diverse flora and fauna community. The first thing that immediately comes to mind when we hear the word “forest” is trees. A forest ecosystem is defined as an area covered in trees that form distinct canopy layers. Forest ecosystems have been classified into distinct varieties based on the climatic circumstances of the location – for example, tropical rainforest, temperate rainforest, and so on.

Grasslands thrive in dry areas with little moisture in the soil. Furthermore, the grassland environment has low-growing plants. Because they don’t get much rain, they stay shorter in height.

They can, however, live in these conditions because their roots are deep in the soil. As a result, they are able to absorb moisture from the soil. The amount of precipitation received by the grassland environment affects its vegetation.

Types of Grassland Ecosystem present on the earth

Read About: Biotic and Abiotic Components

About one-fifth of the Earth’s surface is covered by the desert biome. Depending on the kind of desert, this biome has a layer of soil that might be sandy, gravelly, or stony. Deserts receive only 50 centimeters (20 inches) of rain per year on average, and desert species have evolved to thrive in such a dry environment.

What are the four different kinds of ecosystems?

Artificial, terrestrial, lentic, and lotic ecosystems are the four types of ecosystems.

What is the most common ecological type?

Freshwater, marine, and terrestrial ecosystems are the three main types.

What ecosystem is the most common?

Because oceans and the living things they contain cover 75 per cent of the Earth’s surface, ocean ecosystems are the most frequent on the planet.

What is the rarest ecosystem?

Freshwater ecosystems are the most scarce, accounting for only 1.8 per cent of the planet’s surface area.

What are the ecosystem’s three biotic components?

Biotic components are divided into three categories. Autotrophs, or producers, Heterotrophs, or consumers, and Detritivores, or decomposers, are the three types.