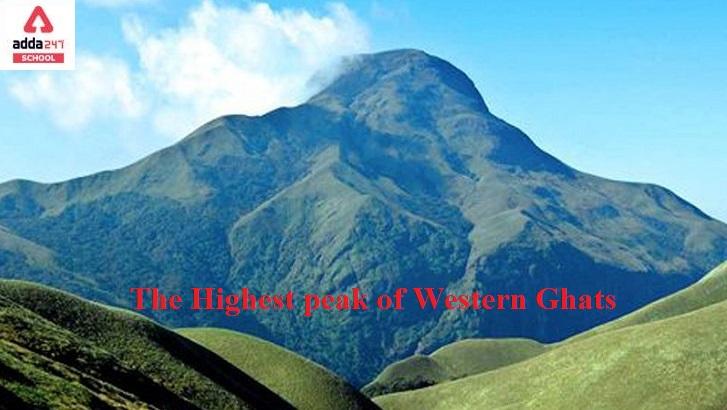 The highest peak of western ghats in India: Heights are interesting; whether it be of mountains or the heights in your career! However, even if you are a beach person, you can not avoid mountains. Avoiding them for travels is still understandable but you never know what GK question about mountains awaits you. So, we came to your rescue! Keep reading this article and we will tell you not only about which is the highest peak in the western ghats, but also a lot more things that are related to it.
Here we go!

The highest peak of western ghats in India: Anamudi

Read About: First pilot of India

The Western Ghats are a mountain range that runs parallel to the Indian peninsula’s western coast, passing through the states of Karnataka, Goa, Maharashtra, Gujarat, Kerala, and Tamil Nadu. This UNESCO World Heritage Site, also known as the Great Escarpment of India, is one of the world’s eight hotspots of biological richness. The Western Ghats are thought to be substantially older than the Himalayas. The Western Ghats also have an impact on Indian monsoon weather patterns. Intercepting rain-laden monsoon winds influences Indian monsoon weather patterns. Late in the summer, rain-laden monsoon winds blow in from the southwest.
Along the western coast of the Deccan Plateau, the range stretches north to south. It also separates the plateau from the Konkan, a narrow coastal plain along the Arabian Sea. In 2012, the World Historic Committee listed 39 places in the Western Ghats as world heritage sites. Twenty of the 39 were from Kerala, ten from Karnataka, six from Tamil Nadu, and four from Maharashtra.
The range begins near the Gujarat town of Songadh. The Tapti river, which flows through Maharashtra, Karnataka, Goa, Kerala, and Tamil Nadu, starts in Gujarat’s Songadh town and goes for around 1,600 kilometres. It then comes to a close in Marunthuvazh Malai, Swamithope, Tamil Nadu, near India’s southernmost point.
The catchment area for complicated riverine drainage systems is formed by these hills, which encompass an area of about 160,000 km2. The draianage systems have already drained about 40% of India’s resources. The Western Ghats also help to keep southwest monsoon winds away from the Deccan Plateau.

Read About: Longest Dam in India

The highest peak in the Western Ghats and the Eastern Ghats

As mentioned earlier, Anamudi is a mountain of the Western Ghats and is located in the Ernakulam and Idukki districts of Kerala. The peak is a fault-block mountain found in Eravikulam National Park’s southern area. It is located at the confluence of the Cardamom, Anaimalai, and Palani Hills. Munnar, 13 kilometres away, is the closest town to Anamudi. The most straightforward approach to Anamudi is a technically simple hike. This hike begins on a rolling hill plateau with a base elevation of about 2,000 metres and continues through grass slopes. However, the route’s north and south slopes are mild, while the east and west slopes are harsher. With increasingly difficult rock faces, the steeper slopes become more deadly.
To know About: The Highest peak of Eastern Ghats

Highest Peak of the Western Ghats on Map

The Highest Peak of Western Ghats: Flora and Fauna

The western ghats are one of the world’s ten “hottest biodiversity hotspots” in itself. There are still many undiscovered species in the Western Ghats, with around 7,402 blooming plant species, 1,814 non-flowering plant species, 139 animal species, 508 bird species, 179 amphibian species, 6,000 insects species, and 290 freshwater fish species. The Western Ghats are home to roughly 325 globally threatened species, according to estimates.
Now, talking particularly about Anamudi, the greatest surviving population of the Nilgiritragus hylocrius, or Nilgiri tahr, may be found in Anamudi, which is surrounded by the Eravikulam National Park. Asian elephants, gaur, Bengal tigers, and Nilgiri martens are just a few of the wildlife that may be found near the Anamudi summit. The area surrounding the mountain is also home to a newly discovered species of frog known as Raorchestes resplendens. Patches of stunted Arundinaria densifolia cover the peak of the Anamudi. There’s also Gaultheria fragrantissima, or wintergreen, Anaphalis sp., Impatiens, and a few Eriocaulon species.

FAQs on The highest peak of western ghats

Which peak in the Western Ghats is the highest?

The highest peak in the Western Ghats is Anaimudi.

Which state has the highest proportion of Western Ghats?

Kerala is home to the highest Western Ghat peaks.

Which of the Eastern and Western Ghats’ peaks is the highest?

Doddabetta Peak, near the confluence of the Eastern and Western ghats, is the highest point in the Nilgiri Hills.

What is the world’s highest mountain?

The summit of Mount Everest is the highest point on the planet.

Which of India’s peaks is the highest?

Kanchenjunga is the highest peak in India.